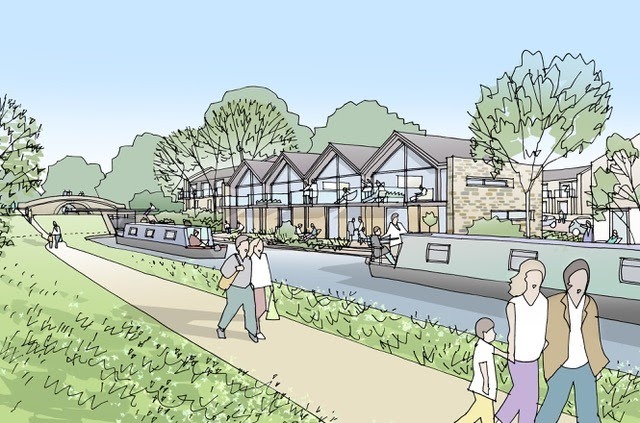 As the country is set to embark on a summer of UK holidays, plans have been unveiled to create a new eco-friendly holiday destination, Ellel Holiday Village in Lancaster, the historic North West city.

Set to be one of the most eco-friendly holiday parks ever built in the UK, the proposed £50m development, planned for a 2023 opening, will include a 90-bedroom hotel designed to sit within the landscape, complete with a grass roof and 450 lodges set within both mature and new woodland, alongside canals and wetland walkways.

It also includes a combination of unique visitor attractions ranging from an Artisan Marketplace to an Immersive Wildlife Centre where woodland walks are combined with 21st Century technology to deliver a state-of-the-art visitor centre.

The Artisan Marketplace will see artisans encouraged to set up shop and trade their wares. The scheme will scrap traditional rents, and instead allow Artisans to pay a percentage of their turnover instead of rent, in an attempt to encourage entrepreneurship in this innovative project.

The bold new initiative is the brainchild of Lancaster based M Capital Properties Limited, and Susie Charles, a direct descendent of the Sandeman port dynasty. The land was once part of the famous Ellel Grange estate, the former home of the Sandeman family.

A commitment to plant over 30,000 trees and the achievement of a 15% biodiversity net gain is a massive step forward in moving the area to a carbon neutral area, and potentially a national first, as to date this has never been achieved in a local planning application. Rather than destroying the landscape the local Company behind the project is committed to building new micro communities and forming new habitats in which wildlife can be encouraged to thrive.

Once complete, the Ellel Holiday Village, complete with both retained and restored woodland as well as wetlands and grasslands, has the potential to absorb and store a staggering amount of atmospheric carbon each year.

Visitors will move around the site on electric buggies and bikes, in a further aim to reduce carbon emissions.

According to experts ‘Hatch Regeneris’, the proposed site will generate approximately £28m of additional revenue for the local area and create 670 jobs making it one of the most important developments and job creation initiatives the area has seen in a long time.

Andrew Stanyon, Project Director said: “We have set about to fulfil a dream, a dream to build an eco-friendly legacy we can be proud of for generations to come.

“Everyone is aware we are facing a climate emergency, and unless we take action now we will ultimately destroy our wonderful Planet. It’s no longer enough for new developments just to reduce carbon emissions, we also need to remove carbon from the atmosphere. Nature is our greatest ally in locking carbon away and protecting our climate. ‘Rewilding’, planting woodlands, wetlands and encouraging wildlife, can help nature recover on a massive scale. Done right it can help significantly reduce our carbon footprint, and help shape a better future for people.”

A decision on the planning permission is expected in August of this year.