£8m Package Of Improvements For A64 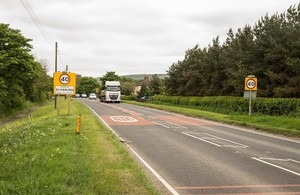 Gateways have already been created in a number of villages including Sherburn
Drivers using the A64 coastal route between York and Scarborough are to benefit from an £8m package of improvements to make journeys safer and smoother,
From:

Highways England will carry out the work this financial year, starting in the summer.

Highways England project manager Richard Burgess said: Over the last two years we’ve invested over £26 million in the A64 to continue to provide safer and smoother journeys for drivers.

We’ve carried out drainage work to address issues with standing water, as well as resurfacing and reconstructing the road surface between West and East Heslerton and between Sherburn and Staxton, creating village gateways to slow traffic and make road users more aware they are travelling through built up communities.

We’re pleased to be able to make more improvements for the drivers benefit and will be doing whatever we can to minimise disruption whether that be carrying out works overnight or avoiding the busy summer holiday period.

Improvements due to be made this financial year include:

the latest phase of drainage work between Sherburn and Ganton will continue overnight over the next few months.
replacement of safety fencing which has reached the end of its life at various locations near Malton this summer
drainage work and resurfacing at Rillington, which is currently scheduled for late September/early October
re-waterproofing the carriageway at Flixton Carr in September
drainage work between Hazelbush Crossroads and Stockton-on-the-Forest in autumn
safety improvements at Old Malton which are planned to start in October
resurfacing from Barr Lane to Claxton in late autumn
slip road reconstruction and resurfacing at Headley Bar, Askham Bar and Musley Bank, also in the autumn