A 100th Pole And A Sixth Spanish Victory For Hamilton

Just five days after the chequered flag had flown at the end of the Portuguese Grand Prix Formula 1 cars were back on track, this time at the Circuit de Barcelona-Catalunya, as practice began for today’s Spanish Grand Prix. Mercedes’ Sir Lewis Hamilton and Red Bull’s Max Verstappen have so far been the leading protagonists in this year’s battle for the Drivers’ Championship and on this occasion it was the former who emerged with a sixth victory in Spain after claiming a record 100th pole position yesterday.


Lewis Hamilton claimed a 100th pole position plus the race victory in Spain
The track is located in Montmeló, 32 kilometres north of central Barcelona, and was hosting the Spanish Grand Prix for a thirtieth consecutive year. Before this season the venue has also often been used for pre-season testing and for Spanish fans there was additional interest as, in addition to Carlos Sainz, they also had another homegrown hero to support following Fernando Alonso’s return this year to the pinnacle of world motorsport.

Just prior to the Spanish event there were announcements about five senior Mercedes power unit staff leaving the team to take up high level roles within Red Bull’s new Powertrains operation, a trend started a few weeks ago when it was revealed that Mercedes’ Head of Mechanical Engineering Ben Hodgkinson would be joining Red Bull as its Technical Director. With Red Bull’s current power unit supplier Honda leaving Formula 1 at the end of this season, the Milton Keynes based team is set to bring the related operation in-house and is constructing a state-of-the-art facility alongside its current HQ. The current power units will then be manufactured there, as will the new specification ones expected from 2025 onwards.

Elsewhere in the Spanish paddock Valtteri Bottas was keen to deny there was any truth in the Daily Mail’s recent suggestion that his Mercedes team was considering dropping him and replacing him during the current season with their junior driver George Russell, who is currently loaned out to Williams.

Arriving in Barcelona, the under pressure Finn was already 37 points behind his team-mate Hamilton and only fourth in the Drivers’ Championship standings after just three Grands Prix, but he maintained he would be staying at Mercedes for the whole of his latest one year deal and took a very public dig at Red Bull by suggesting that there is only one team in F1 which changes drivers mid-season!

Time will tell what the outcome on this one will be, both this season and perhaps more importantly next when any change is probably more likely unless Bottas’ performances really worsen at a time when Red Bull is posing more of a threat for the Constructors’ Championship. The Drivers’ Championship attracts all the glory, but it is the Constructors’ one which determines who receives how much in terms of end of season prize money and is thus taken extremely seriously.

The news from the UK government on Friday afternoon that Turkey had been added to its “red list” in terms of overseas travel and related quarantine periods has dropped a further task into the Formula 1 authorities’ intray, with a Grand Prix just outside Istanbul set to take place on 13 June, a week after the Azerbaijan race in Baku. It‘s expected that a decision about the viability of the Turkish event, which was only recently added to this year’s calendar when pandemic related issues had forced the cancellation of the Canadian Grand Prix, will be made shortly. 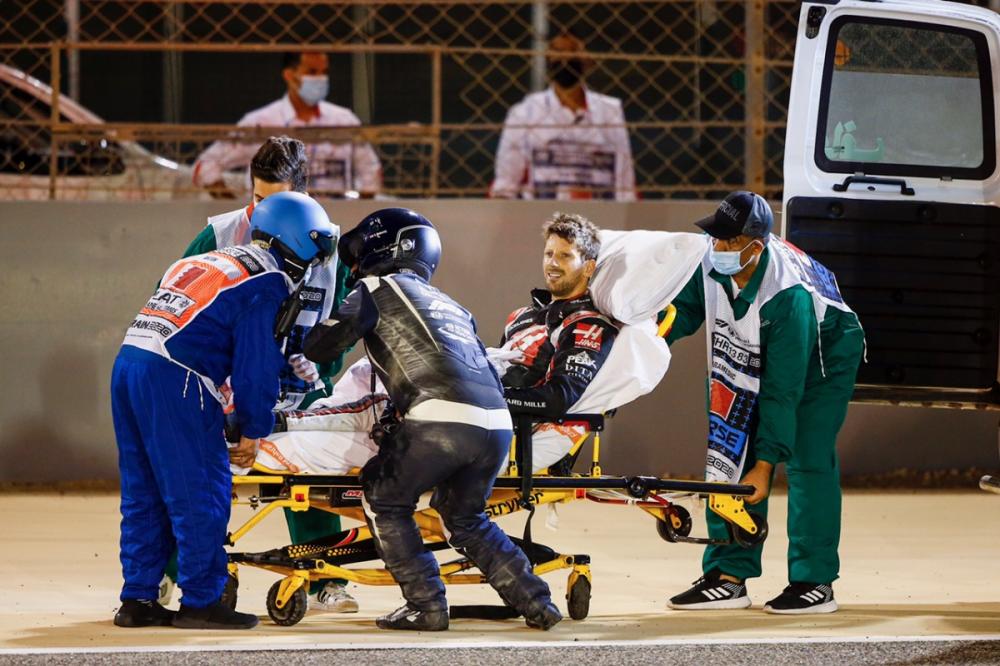 Mercedes is to give former F1 driver Romain Grosjean (centre) an opportunity to drive a 2019 car in France next month
On a more positive note, there was good news for Romain Grosjean in that the Mercedes F1 Team Principal and 33% owner Toto Wolff is set to honour his promise to give the French driver a final drive in a modern Formula 1 car following his horrendously fiery accident for Haas in Bahrain last November. He will undertake a demonstration run in Hamilton’s 2019 title-winning W10 prior to this year’s French Grand Prix at Paul Ricard on 27 June and then drive it again two days later at the same venue.


Also by Graham Read...
High Drama In Azerbaijan As Pérez Wins ThrillerR.I.P. Max Mosley 1940-2021Verstappen Wins And Takes Championship Lead In MonacoThe Pandemic Forces Further F1 Calendar ChangesHamilton Extends His Championship Lead In Portugal
F1 is essentially all about speed and driving round a circuit faster than anyone else, with the subject of track limits again on the agenda at Montmeló. Race Director Michael Masi issued guidance about the corners where drivers would be monitored for adhering to track limits and not running fully off the circuit and about those where it would be ignored, leading to a slightly confusing situation for the drivers but for fans in particular.

In football if the ball goes over the line and off the pitch it’s out and players can’t extend the playing area to suit their own purposes, but in Formula 1 it is not so simple, even if it should be. The result is a growing feeling that action needs to be taken by the FIA governing body to clamp down on all breaches of track limits (other than when having an accident or taking action to avoid one) and that this would quickly make the situation clearer for all and stop drivers trying to get away with their own extensions to the circuit.

The skies were clear and the air temperature pleasantly warm as the cars took to the track for Friday morning’s opening free practice period and it was Bottas who topped the timesheets, just 0.033s faster than Verstappen and with Hamilton and McLaren’s Lando Norris the best of the rest.

The session had to be red flagged with 15 minutes remaining when the main Alfa Romeo reserve driver, Poland’s Robert Kubica, lost control of the rear of Kimi Räikkönen’s car at the reprofiled Turn 10 and headed off backwards before becoming beached in a gravel trap and having to be craned away. In the afternoon’s second practice period Hamilton and Bottas led the way ahead of Ferrari’s Charles Leclerc, with Verstappen surprisingly only ninth fastest.

Come Saturday morning attention turned to the final practice hour and Red Bull’s Dutch charger was back on the pace, with Hamilton and both Ferrari’s in hot pursuit. The circuit was basking in 25C sunshine as the start of qualifying was delayed by 10 minutes to allow for repairs to the Tecpro crash barriers at Turn 9 to be completed following an accident in a support race.

However, the big story to emerge from the three part session was Hamilton’s 100th F1 pole position, a feat never achieved by any other driver. Verstappen proved to be the best of the rest, with Bottas and Leclerc claiming the second row on the grid for the following day’s race. The French driver Esteban Ocon caught the eye too as he went an impressive fifth fastest for Alpine, five places ahead of his team-mate Alonso. 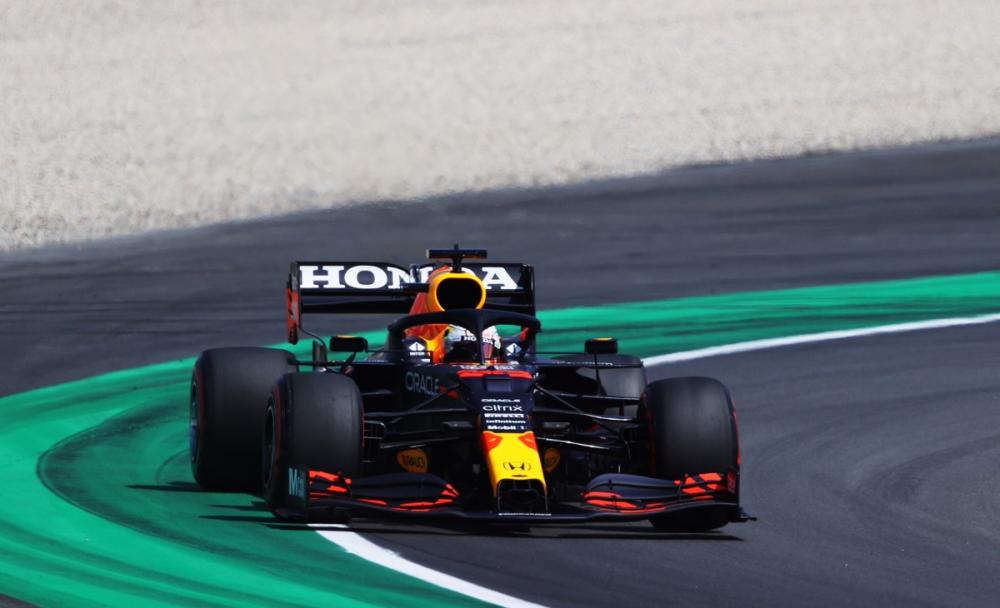 Red Bull’s Max Verstappen again had to settle for second best
27 of the 30 Spanish Grands Prix held at this track have been won by a driver lining up on the front row and, as the 66 lap encounter neared, Hamilton and Verstappen were understandably the hot favourites. In contrast to the previous day, conditions were noticeably cooler and overcast as the cars made their way to the grid for the 3pm local time start, with a few drops of rain in the air. It’s a long 645 metre sprint down to Turn 1 and when the red lights went out it was Verstappen who made the better start and claimed the lead as they swept through the opening righthander. Bottas was forced to lift as Hamilton recovered his pace, allowing Leclerc to then get the better of the Finn around the outside at Turn 3.

Verstappen and Hamilton were soon eight seconds clear of the third placed Ferrari driver, but this advantage was lost when the Safety Car came into play on the eighth tour after Yuki Tsunoda’s AlphaTauri had ground to a halt with a loss of power. Racing resumed three laps later and the leading duo again started to drop Leclerc, Bottas, McLaren’s Daniel Ricciardo and the Red Bull of Sergio Pérez. On lap 24 Bottas pitted to switch from soft to medium specification rubber and Red Bull instantly responded by bringing their team leader in for the same change. However, the replacement left rear tyre arrived late into the pit lane and Verstappen’s stop was two seconds longer than it should have been.

Two tours later Mercedes pitted the leading Hamilton for medium tyres, but he rejoined the track in second place six seconds behind his Red Bull rival, whilst Bottas regained third position from Leclerc. The reigning champion soon reduced the gap to Verstappen before Mercedes played a strategic master card on lap 42 when the team brought Hamilton in for a second stop and replacement medium tyres, whereas Red Bull opted not to do likewise for the leader. This left Hamilton in third position behind Bottas and crucially 22 seconds adrift of Verstappen with 23 laps remaining. 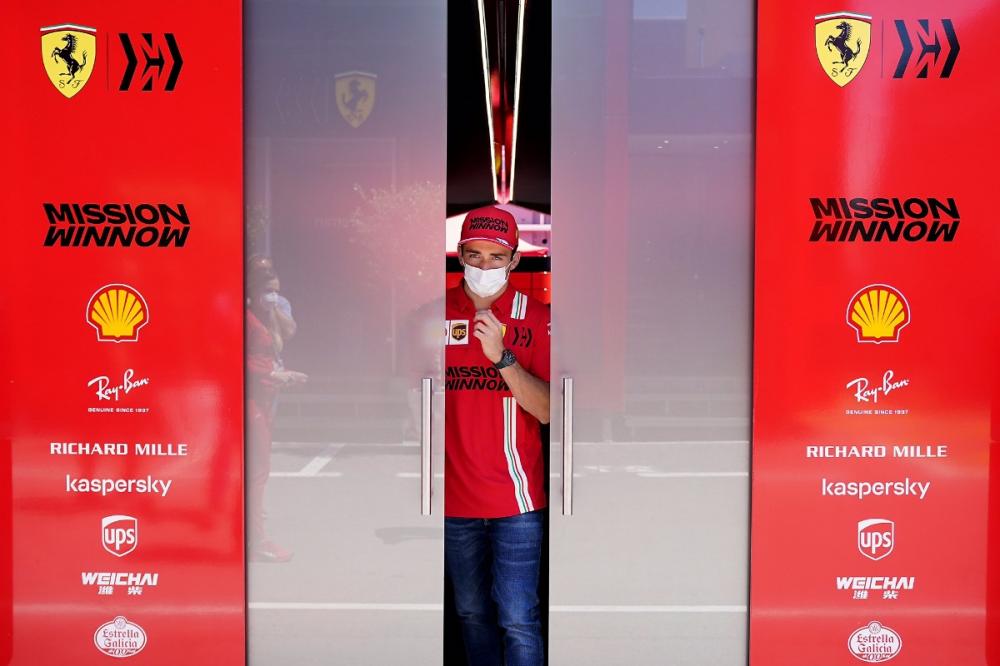 Not a bad day for Ferrari’s Charles Leclerc who both started and finished fourth
Hamilton then set about gradually eating away at Verstappen’s lead and on lap 52 Mercedes instructed Bottas, who was on a different strategy, to let his team-mate past, which he eventually did after a little delay before being pitted himself for soft tyres for a fastest lap attempt. With six tours remaining Hamilton swept round the outside of Verstappen at Turn 1, helped by DRS, a slipstream and fresher tyres and it was game over in terms of the battle for the victory. The latter did then have the opportunity for a second pit stop for soft tyres, which he used to claim the extra point for the fastest lap of the race.

So, come the chequered flag Hamilton, Verstappen and Bottas were the podium trio, with Leclerc, Pérez and Ricciardo completing the leading sextet. Sainz was the highest placed Spanish driver, finishing seventh in his Ferrari, but 17th placed Alonso was resoundly beaten by his Alpine team-mate Ocon who was ninth. 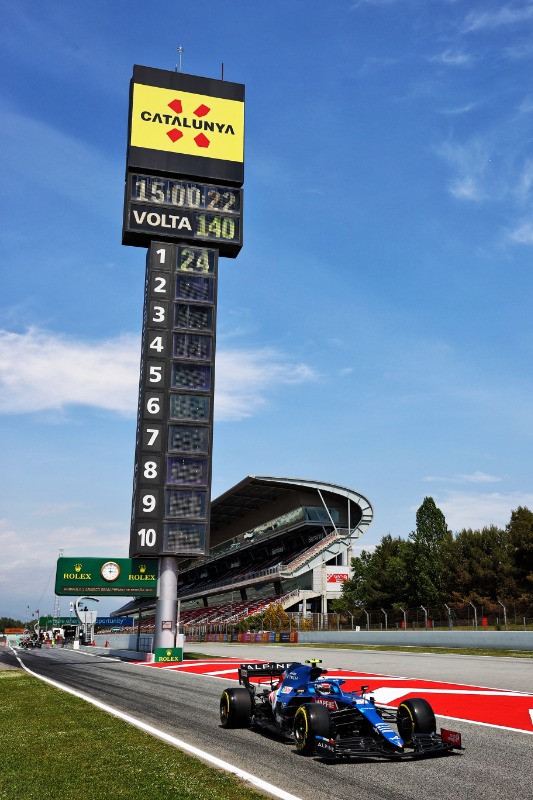 The Circuit de Barcelona-Catalunya hosted its 30th consecutive Spanish Grand Prix today
The next stopping point on the long journey towards this season’s titles will be at Monaco in a fortnight’s time. With the pandemic having forced the renowned “jewel in Formula 1’s crown” to be cancelled last year, the streets of the tiny Monégasque Principality will again reverberate with the sounds of tortured F1 engines and tyres. Overtaking is so difficult there, with qualifying and pit stop strategy crucial, but having attended many Monaco Grands Prix I can testify that the atmosphere on race day is absolutely unique. Bring it on.