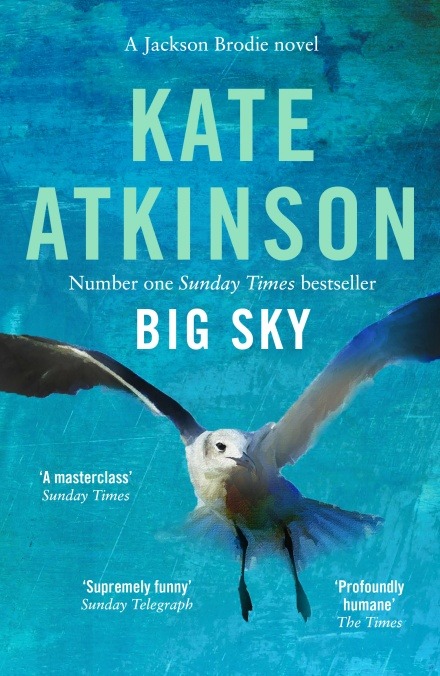 It’s a long time since I have hurtled full pelt through a novel, willing the pages to turn as I absorb character and plot with such a greedy eagerness, but Big Sky had me hooked from the start as character after character was introduced in the wonderful Yorkshire setting of rugged coastline, towns such as Scarborough and Bridlington, pretty villages and even the ‘flat surburbia’ of Acomb.

Much of the location is familiar to me, so visualising events was made a little easier and the plot through which private investigator, Jackson Brodie, wends his way has a gritty reality about it which is something to really get your teeth into. Nothing is for nothing; no detail is wasted and Atkinson has a purpose for everything she includes.

Operation Villette, led by ‘the Kray Twins’, two female detective constables who happen to be named Ronnie and Reggie, and the House of Horrors investigation in to ‘the magic circle’, collide and intertwine. The crimes at the centre of this novel are particularly nasty, and somewhat topical: an historical investigation into a paedophile ring of elite, establishment figures is reopened, whilst a currently active company is trafficking young women into the UK - some passages are gut-wrenching.

Less is more and Atkinson doesn’t indulge in venal description, but describing the children and hopeful young women like ‘the sisters’ in phrases such as “the disappeared, gone where no flashlights could illuminate” opens a door to the imagination. ‘The parties’ would be no fun for them.

The novel isn’t depressing, however as resolution and retribution are achieved - one way or the other: Mr Congeniality’s ‘death rictus’ – Atkinson employs some wonderful phrases; Vince, with his ‘friend friends’, his ‘golf friends’ and his ‘work friends’; Brodie, who has already used up several of his nine lives and Crystal, who ‘wasn’t stupid’, all make their contributions, although it is a ‘righteous compromise’ which brings closure.

Big Sky in no way makes light of the horror but does remain an engaging and entertaining read, and Atkinson is able to inject some humour into her narrative: Thisldo, High Haven and Miss Dangerfield along with Bunny Hopps and Barclay Jack are names which hint at wry humour. 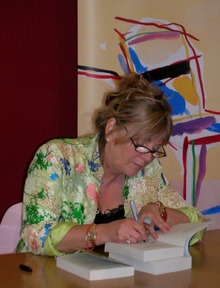 Kate Atkinson in 2007
She has a talent for creating character. Jackson Brodie himself is well drawn: an ex soldier, ex police inspector turned PI. He has a sullen teenage son and an ageing dog, a daughter whose fleeting appearances at the beginning and towards the end, only add to Atkinson’s ability to tell a story, and a series of exes who give him credibility. Atkinson makes good use of repetition and “a coincidence is just an explanation waiting to happen,” is Brodie’s repeated truism.

The rest of the cast are diverse and most have a dual nature. In many cases, sophistication and apparent social conformity, evidenced by position, wealth and all its trappings, belie the sordid underbelly of their present and former lives, and the source of their dirty money: “The thing about the past was that, no matter how far you ran or how fast you ran, it was always right behind you, snapping at your heels”.

Crystal learns this only too well. She has a dark past, to which Atkinson frequently alludes, but she’s a survivor and eventually projects a more positive image in this degenerate world. She cares for Candace, her spoilt three-year-old Disney princess who has everything a young Crystal (or Christina) never had, and for Harry, her bookworm teenage stepson with his part time job at Transylvania World.

Atkinson is subtle. Reader, don’t skip the detail. As well as trophy wife Crystal, there are the other wives, Rhoda and Wendy, so easy to recognise, but don’t ignore the ‘gracious’ Sophie, as she offers the police officers her Betty’s strawberry tarts – innocent flower or serpent? Even Penny Trotter cannot be underestimated. The more I write, here, the more detail springs to mind, so keep your wits about you as you read.

In Big Sky, Atkinson squeezes all the sleaze she can from a world of seaside attractions. The haunting melody of Carmody’s fairground is ever present and, along with the tunes played by Bassani’s ice cream vans, will forever sound discordant after this.

I would have sworn I had read Kate Atkinson before, but it appears not, and I cannot for the life of me understand why. I know I need a new shelf for the collection which is about to form.


Also by Artis-Ann ...
Revenge Is A Dish Best Served Cold: The Racketeer By John GrishamA Different Perspective: The Other Side Of Truth By Beverley Naidoo, Stone Cold By Robert Swindells‘You Need All The Luck You Can Get’: A North Sea Tale By Chris SpeckIn The Eye Of The Storm: A Cotswold Ordeal By Rebecca Tope'Women Are From Venus': Joanna Trollope And Helen Fielding