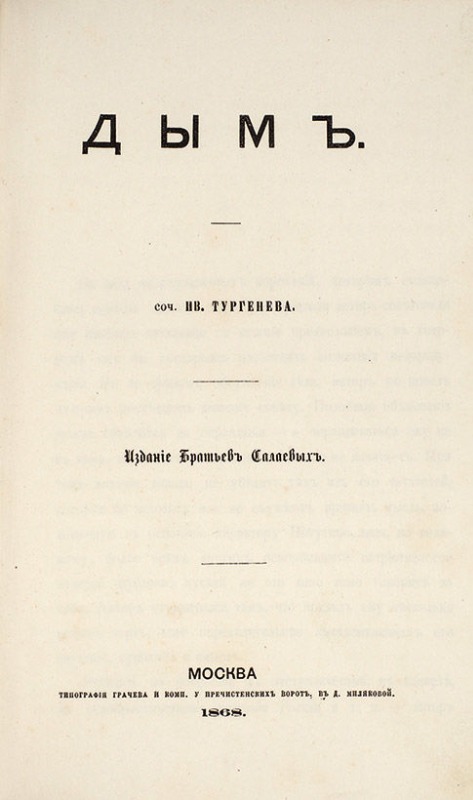 Cover of First Edition. Image - Wikipedia.
Nestled amongst my collection of often tenebrific Russian classics, the works of Turgenev seem to pulse as soft lucent beacons. His novels do not scar the retina of the reader with the blinding, dramatic lightning of Dostoyevsky or Tolstoy, but instead offer us the altogether more subtle tones and hues of a literary sonata. Turgenev penned no magnificent symphony in prose…instead, he gently distilled the contents of his compassionate, cosmopolitan heart onto the pages of his oeuvre in the form of humanistic candlelight, rather than the hungry flames of a captious conflagration.

My copy of Smoke was printed in 1915, translated by Constance Garnett with a foreword by her husband Edward. First published in Russian in 1867, several years after Turgenev had made the German resort of Baden-Baden his home, an English language translation did not appear until 1896. My edition maintains the weakest of grips on its mottled, age worn papyraceous pages. It seems to demand that I acknowledge its conspicuous lack of modernity before disturbing its fragile form. A useful visual prompt to approach its story through the cynosure of the epoch in which it was written.

Following the married love of his life, internationally venerated mezzo-soprano Pauline Viardot, to Germany in 1863, Turgenev, like many Russians, had retreated from his motherland to find solace in the picturesque civility of Baden-Baden.
In his Guide To Russian Literature (1820-1917),, Moissaye J. Olgin tells us that Russian literature of this period was a product of the landowning nobility, and was to a large extent a substitution for social and political activity. Russian intelligentsia were prevented by the ruling autocracy from putting their ideas into practice, so much so that nascent political factions almost always coincided with prevailing literary schools.

He tells us that literature of this period, 'is a very serious occupation, almost a civic service… the aim of literature is not to be pleasing, but to touch the most important moments in the life of the individual as well as in the life of society and humanity'. Russian writers disconnected from that which they hoped to influence, often wrote with 'the voice of a sick conscience' and their words reflected the unique societal, ethical and political constructs operating upon of their ideologically tumultuous times.

Placing Smoke in context, both in terms of Turgenev’s oeuvre and the Russian literary tradition per se, translates not just the author’s tongue into a language we can understand, but allows this romantically themed pasquinade to sing its melancholic melody unmuffled by the sensitivities and proclivities of our own era.

Robert Dessaix in his enlightening book, Twilight Of Turgenev, Travels With Turgenev says, 'right across the political spectrum, just about everyone, whether radical or conservative had detested Father and Sons and absolutely everyone felt betrayed and insulted by Smoke'.

In the years following the abolition of serfdom in Russia in 1861, febrile intellectual unrest had accompanied an ever uncertain transition towards modern economic and social conditions. N. Strakov famously wrote that, 'a New Man had appeared ; an intellectual, though not a son of the manor…his intellectual guides were the materialistic philosophers Buechner and Moleschott, whereas the former generation had idolised Hegel, Schilling and Pushkin'.

Tsars and tsarinas , grand dukes, princesses and generals along with a diverse cornucopia of petty nobles, rubbed shoulders with poets, playwrights and writers all bathing in the fashionable societal waters flooding through the resort’s ostentatiously elegant avenues and restaurants.
Turgenev had represented this 'New Man' in his novel Fathers and Sons in the infamous form of Bazarov, the first literary manifestation of a nihilist, and fervent acolyte of the 'Natural Sciences'. Turgenev had presented the intellectual 'radicals' of his time with an unflattering mirror and characterised these reformers as unmoored, desperately earnest windbags. His sagacious gaze had found much to lament as his beloved nation struggled with its ideological identity and generational tensions threatened to rupture the fabric of society itself.

Following the married love of his life, internationally venerated mezzo-soprano Pauline Viardot, to Germany in 1863, Turgenev, like many Russians, had retreated from his motherland to find solace in the picturesque civility of Baden-Baden. Russian invalids and hypochondriacs had flocked to the glamorous European resort for the waters, whilst gamblers, adventurers, and what Dostoyevsky referred to as 'scum', had infested the magnificent, architecturally opulent casino.

Tsars and tsarinas , grand dukes, princesses and generals along with a diverse cornucopia of petty nobles, rubbed shoulders with poets, playwrights and writers all bathing in the fashionable societal waters flooding through the resort’s ostentatiously elegant avenues and restaurants. Turgenev observed his own countrymen as though exotic and sickeningly pretentious fish out of water and found himself besieged by the mimetic buffoonery of Russians pretending to be enlightened Europeans. His heart sank.

Though never a dyed-in-the wool patriot, Turgenev began to turn his cosmopolitan back on Mother Russia. Refusing to be passively defined by the soil of his native land and its zeitgeist, he’d already immersed himself in European culture and its 'civilised ways'.

Whilst Dostoyevsky bitterly renounced him for his apparent lack of patriotic fervour, Turgenev continued to love his homeland, but yield to the ever more adient impulse to remain abroad, and efficaciously mock what he could not change. Smoke became the outpouring of both his mild spleen, and his ever gracious, always compassionate imperative to reflect Russia back to itself.

Smoke introduces us to Grigory Litvinov, a minor member of the Russian gentility and his capricious and deeply insincere love, Irina Pavlovna Osinin. Irina craves rescue from the banality of her quotidian existence and Litvinov becomes her knight in shining armour. Our amatory adventure is cut short when Irina elopes with the Russian general Valeria Ratmirov, soon finding herself in the exalted company of Russia’s finest aristocratic echelons.

Ten years later whilst holidaying in Baden-Baden, our lovelorn Jeune Premier, Litvinov, is again seduced by the ever disingenuous, emotionally insecure Irina. Once again seeking salvation from the vacuous, decadent and dispiritingly sterile courtly world she has inhabited as a priceless gemstone on a gaudy signet ring, Irina callously manipulates Litvinov’s callow heart, and rekindles his obsessive fixation for her.

Turgenev paints an assiduously meticulous portrait of the individuals Litvinov meets in the form of Russia’s idealistic 'New Men', and the conservative aristocrats asphyxiating his unattainable love interest as she struggles to breathe in their vacuous, soul-corrupting company. The doomed couple’s tragic romance allows the reader a fly-on-the-wall vantage point from which we watch Litvinov’s life crumble into disillusioned dust, whilst we observe the relentless pontifications and intellectually vapid enthusiasms of those who befriend him as a kindred.

Pompous and irritatingly supercilious Russian aristocrats swan about a resort bedecked in expensive sartorial costumes, mildly embarrassing themselves and their nation.
Dextrously weaving the twin skeins of romance and satire, Turgenev gives us a literary zoetrope, presenting his characters as targets for his satirical scorn, but never allowing himself to be either grossly blatant, or authorially conspicuous. Though Litvinov is a pentimento recalling Bazarov, and Irina perhaps a viscid echo of his beloved Pauline though modelled upon a real-life mistress of Alexander II, Turgenev does not sacrifice theme for artistic verisimilitude. He gives us a nuanced love story, peopled by characters who leave the page, though they do so like skilled actors leaving an ornate stage.

Turgenev’s prose is never less poetically sensitive than that of E.M. Forster and his deft presentation of his protagonist’s inner life often surpasses even Forster’s sublime skills. Returning to Olgin, I think his words describe Turgenev’s prose rather more eloquently than my modest abilities allow:

'Turgenev’s language is like music. His pictures are tender pastels. His characters are drawn with a firm and loving hand…he is the poet of youth and love, a guide through the sweet mysteries of women’s souls, an interpreter of the most gentle, delicate emotions, a garden full of beauty. Yet, Turgenev is at the same time in the very midst of social life, giving voice and scintillating artistic expression to the foremost ideas of the society he lived in'.

With his iron fist snugly ensconced within an elegantly bejewelled velvet glove, Turgenev explores the themes of betrayal, salvation, the nature of love and the inveterate velleity of the Slavic population he both adores and scorns. Young 'intellectual' minds betray the needs of their nation, naïve hearts are betrayed in pursuit of self-aggrandising status, and Russia’s mawkish reverence for its mimicry of Europe’s cultural conventions is roundly lambasted.

The modern reader might not see what all the faintly hyperbolic, maudlin fuss is about. A weak-willed man jilts his betrothed to pursue his first love, and a few pretentious intellectual revellers waste their time discussing philosophy and morality, whilst playing a fatuous game of asinine societal one-upmanship.

Pompous and irritatingly supercilious Russian aristocrats swan about a resort bedecked in expensive sartorial costumes, mildly embarrassing themselves and their nation. In Turgenev’s more morally prescriptive times, these modern foibles were cardinal sins. Understanding that point unlocks Smoke's elegantly crafted brilliance and bestows upon its story a visceral potency, and acidly-etched thematic heft.

Reflect upon this line – 'of all this dead past, all the hopes and efforts, turned to smoke and ashes ; there is only one thing left living, invincible , my love for you'. The words of our doomed Litvinov ; they could also be those of an aging Turgenev himself referring to both his beloved Pauline, and Russia itself. Reading Turgenev’s by turns funny, by turns deeply tragic, novel with that thought in mind, one cannot help but see the evanescent 'smoke', whilst feeling the heat of the indignant fire from whence it emanates…


Smoke was first published in the Russian Messenger.
Also by Paul Spalding-Mulcock...
“Love Is The Magician That Pulls Man Out Of His Own Hat”: A Marvellous Light By Freya MarskeExpecto Resurrectionem Mortuorum:The Gift - Book 1, Eleanor, by R. A. WilliamsLittle Liar Boy - A Hall Of Mirrors StoryThe Devil's In The Detail: Johannes Cabal The Necromancer by Jonathan L. HowardAn Audience With The Devil - A Hall Of Mirrors Story