A Spell For The Departed: How To Burn A Woman By Claire Askew 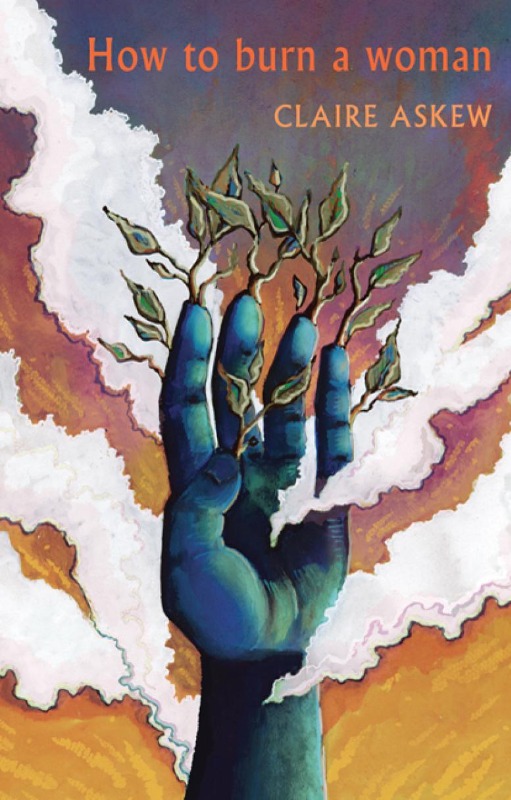 When John Berger indirectly suggested that Francis Bacon was a ‘prophet of a pitiless world’ it was as a mark of reconsidered respect for an artist whose percipience is made continually relevant by an extreme cogency of thinking. Bacon’s tortured figures embody inalienable and depressing human truths: looking into screaming mouths we find corruption, power, violent abuse and hypocrisy deformed in cages of the imagination.

And the brutal honesty which shadows his most visceral work is manifestly present throughout Claire Askew’s utterly astonishing new collection of poems for Bloodaxe. Prefaced with a trigger warning for abuse, assault and torture, How to burn a woman does not wear a mask of propriety; nor does the book demur at frank examinations of schadenfreude or the urge for retribution. Taking a psychological leap beyond Kim Moore’s admirably open discourse of male control and victimization in All the Men I Never Married, Askew entertains the possibility of redress without compromise, of giving vent to undercurrents of hatred or disaffection. There is no room for acceptance or forgiveness in the litany of summoned recall in ‘Show me again’: to suggestions of mitigation, the response to indications of retrospective abuse remains unequivocal:

‘Cornered by the wash-house wall’ of memory, the narrator is caught in a blinding light – ‘sun loud as a trapped cat’ - whose presence is incidental, but, expressed in the form of a brilliant simile, somehow reifies her sense of defilement. Askew’s control at such moments is highly focused and observant, as though to pinion the perpetrator in the moment of infliction. No more so than in the moribund inventory of decline of ‘A spell for the departed’, whose necrotic misery is almost too plausible to be a devoutly wished outcome. The steroidal consummation – the urine flasks, the oversized syringes, the litre bottles filled with pills enough to kill a horse – are imagined punishments for undisclosed (perhaps maternal) derelictions, and the reader is obliged to disinter the reason for the narrator’s hatred from behind ‘the sideboard where my picture / used to sit in its spit-polished frame’.

Which is not to defray a disordered sense of complicity in a universe of recrimination and homicidal inquisition. Disordered, because the threat of violence shapes the reaction, renders memory indistinct: ‘did it even happen?’, asks the victim/narrator of a brutally-observed exchange with an unknown man in her car, in a state of near acquiescence that is dictated by fear:

‘I knew he wanted to hurt me: wanted it so fiercely
I nearly let him’. (‘Men’)

The poem’s final line admits of little beyond a sense of subjection, of a near-willed abandonment, in the bigger picture, to control, to exigencies of force and power of the sort that defined Simone Weil’s examination of the tectonic, homoerotic landscape of Iliad, and Pat Barker’s feminist re-telling of it through the eyes of women. But more than this: in the darkness of human motivation, Askew’s rendering yields also to a sense of erotic/thanatic desire: ‘something in there liked it’, her narrator might have conceded, echoing the moral abnegation of Eddie Waters in Trevor Griffiths The Comedians. The bloke in the throes of masturbatory fantasy on the other end of the line in ‘Phone sex’ cannot know of the quotidian banality of the narrator’s room – the cardigan for warmth, the ‘mug of tea’ – nor of her weakness for ‘filthy vocabulary’, but the counterpoint is both complex and compelling.


Claire Askew, Image by Bloodaxe
Here is the ethically troublous ground on which Askew plays out her profoundly frank discourse. Finding a conduit to her own re-definition of womanhood in the form of the embattled seventeenth century witch, Askew establishes a kind of archetype of suffering. Intersecting her narrative thread with poems of pain, recalcitrance, defiance and abject fear, her ‘testimonies’ are sometimes delivered in the voices of the lost, precisely as they act to reinforce her own sense of identification with their memory. For Askew, the abuse sustains and the book’s title therefore embodies an exegetic symbol; a creative impulse is borne out of the burning’s binary inherence and iniquity is summarily purged.

The commemoration of ‘Devils’ is generally directed but the woman who is obliged to enter the flames is fixed in a pastoral landscape which is ironised by the extremity of her own fate, by the brute, institutionalized controls of her male judges, and, in an exquisite nod to bilateral complicity, ‘under the hot eyes / of their wives’. The final act of defiance is characteristic of Askew’s powerful impulse for redress, and it is measured in the welts and sores of brutalization:

‘We welcomed the fire.
Our cries were cries of joy
as every fingerprint,
shackle-mark, every bite
in our flesh was blistered
clean.’

The poet’s convincing occupation of a terrain of punishment and recrimination is incantatory, indicating a preoccupation whose emotional demands are as astringent as her commitment to research is assiduous. The result is harrowingly effective; the witch’s unrelenting defiance, here and elsewhere, points a charred finger at those men who ‘owned things’, the landscape and the bodies in it, as though the purgatorial process might, by paradox, turn the flames on its invokers.

If the victims’ resilience is vicariously enacted, it is palpable. The temporal realm in which ritualised scapegoating routinely unfolded is as brute as that of Briseis’ enslavement after Troy, and is to Askew’s enormous credit that the drudgery of German ‘witch’ ‘Merga Bien’, who died in 1603, is drawn in a persuasive language of coercion, her admission of becoming pregnant by the Devil enforced in order to satisfy what Durkheim called the ‘collective sentiments’. Her death at the stake is a foregone conclusion in the vernacular of the witch hunt, but worse still the social exile and sotto voce whispering: ‘I had no other children: / the women flinched away from me / in the dirt square like jackdaws, clattering gossip’. Askew finds the perfect simile to describe mental isolation unto death.

So too in ‘Sarah Good’, a poem of controlled authority, which nails the credulous collective ‘grievance’ in the ashen colours of a seventeenth century winter, as though bitter privation were the devil’s work. Desperately affecting in its threadbare simplicity, one almost hears the doors closing behind the condemned on the way to the gallows:

‘they dreaded you coming
your hands-out

ragged face
all too well-kennt

they thought
you’d done it’.

Her social exile is complete before she is hanged; the light she kindles burns with powerful indignation into our own time, in the experience of her ‘foremothers’, on a canvas where the figures remain fixed instruments in an inertia of male-dominated cultural inheritance. Arcing between poles of febrile anger and near-dissolution, Askew’s by no means unitary narrator(s) obtain a kind of redress in the act of defiance. A brittleness of attitude is presented in fragmented formal measures, pyrotechnic use of metaphor and unusual linguistic registers, and it reinforces a sense of identification with her natural ancestors as if by mimesis. But her subjects are no less ‘locked-in’ than Francis Bacon’s as they declaim in their chains. And if her rage is apt to diminish the distance between poet and narrator, circumventing the thin disguise of the third-person, it is violently re-doubled in a terse and on-point series of ‘spells’, whose willed visitation of fire on her male antagonists is a fitting reversal of the witches’ fate, in the manner of Dante’s Contrapasso:

‘Twist the paper,
shove his
smirking face
into the grate.

Set it light.
Hope that
something
takes.’ (‘A spell for the unbelieved’)


Also by Steve Whitaker...
An Unreliable Narrator: The Outsiders By James CorbettPoem Of The Week: 'At The Juliet House, Verona' By Chrissy BanksPoem Of The Week: 'Hunt' By Róisin TierneyPoem Of The Week: 'Good Riddance, But Now What?' By Ogden Nash (1902-1971)Christmas Poem Of The Week: 'Mistletoe' By Walter De La Mare (1873-1956)
Askew’s eloquent ire is best expressed in simple monosyllables and you are obliged, here, to admire her stupendous, skewering directness. And if words are rarely wasted in the promulgation of natural justice, a sense of failure is elsewhere enacted in uncertainty of testimony, or the limitation of poetry to engage with emotional vulnerability. In ‘Playing it cool’, the acquiring of skills of poetic articulation mirrors and measures the experience of fragility symbiotically. Where the intrusion of the emotional present is an unsolicited distraction – ‘yet another poem, subtext’s flotsam / lapping round its parched boards’ – the impulse to wrestle with meaning remains compelling: ‘you had’, the narrator concedes, ‘to go and write it down’. As immanent as a heartbeat, Askew’s recognition of an impulse almost beyond definition is insinuated into her narrative with metaphorical ease:

‘I’m tired
of my own heart,
its boring iambs. I wanted
his instead: the unread
stanzas of his body
writing themselves into my bed
as he undressed. (‘Coming second’)

At her very best, Askew yields no ground to attenuating doubt: ‘Hand of Glory’ makes of the male cadaver a cipher, removed from the hangman’s noose (‘Executioner stage left, / back turned, palming her coins’) and now at the eviscerating disposal of a witch who meticulously dissects the corpse’s hand for arcane purposes. Her act of peeling, slicing and pickling is a statement of occupation, a restoring of ground, a subjecting of the male to her icy custody: ‘Every creed has a hand / of protection. This one is hers’.

Claire Askew’s collection is a vigorously honest prosecution of grievance, a needful resetting of cultural history, and a triumph of resilience.


How to burn a woman is published by Bloodaxe Books