A Visit To Road Atlanta In The USA 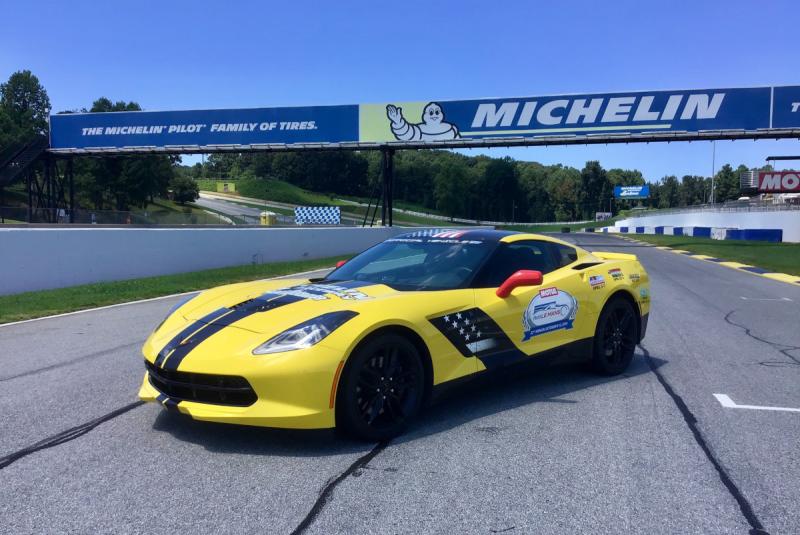 A ride in the circuit’s mighty Chevy Corvette safety car brought a huge grin to my face
People often ask me what I like to do to relax during the Formula 1 season’s annual summer break. Well, I of course I like to indulge my passion for travel to new destinations in this wonderful world of ours which are not on the current F1 calendar, but it probably won’t surprise you that I always also try to make sure there is still a motor racing element included.

So, my wife and I recently flew off to the USA for a self-devised circular road trip around most of the Deep South states, starting and ending in Atlanta, Georgia and also including a pre-arranged media visit to the famous Road Atlanta circuit or, to give it its full official name, the Michelin Raceway Road Atlanta. 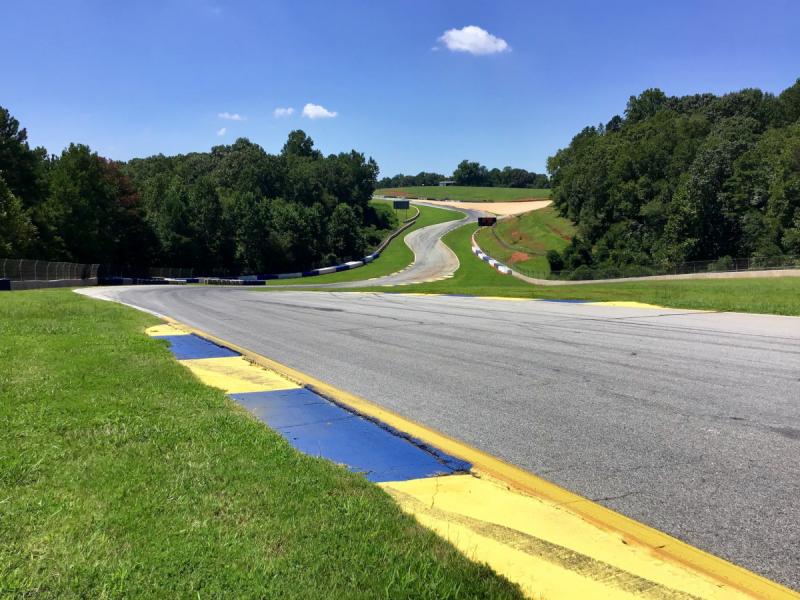 Great weather, great countryside and a great racetrack
The track is located about 35 miles north east of the sprawling city of Atlanta, which possesses one of the busiest airports in the world. However, pick up a rental car from the slick facility just beyond its perimeter and before long you will be approaching the race circuit, near Braselton in rolling Georgian countryside.

Fahrenheit rather than Celsius is still very much the preferred measurement of temperature in the States and, as we arrived, it was nudging well into the 90s, but the sheer beauty of the location quickly outweighed any other considerations. It very much reminded us of an attractive American alternative to our own Oulton Park circuit in Cheshire or a shortened version of the infamous Nürburgring Nordschleife in mid-Germany, both tracks which I have been privileged to drive round in the past. 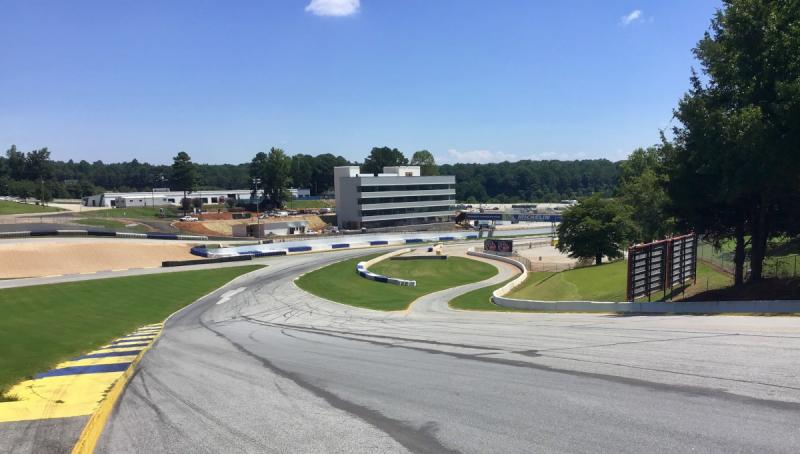 The new multi-storey Michelin Tower building takes shape alongside the grid
Sadly insurance reasons prohibited me from doing likewise around the sinewy and undulating Road Atlanta course in our impressive Chevrolet Malibu rental car, but Hayden Ratliff, the venue’s Co-ordinator for Corporate Partnerships, Marketing and Promotions, chauffeured us round for a couple of slow speed laps in one of their resident SUVs, stopping for photo opportunities along the way.

That was very helpful, but far better was to follow though when he offered to take me round with let’s say a little more spirit and far more pace in the circuit’s bright yellow beast of a safety car, a Chevy Corvette. I still wasn’t behind the wheel, but at least Hayden gave me glimpses of the mighty Vette’s performance capabilities on the demanding 2.54 mile 12 turn track, leaving an undeniable grin on my face. 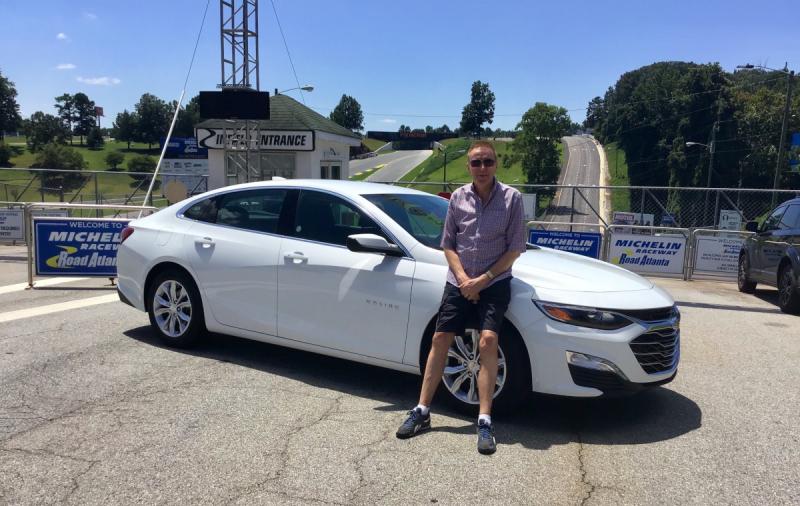 Yours truly with our Chevy Malibu rental car, not quite as quick as the Vette, but still very impressive
The circuit’s history began back in 1969 when three gentlemen called David Sloyer, Earl Walker and Arthur Montgomery decided to carve the original track out of the red Georgian clay on a 750 acre site and in September 1970 the first race was held there. Famous drivers of the time like Vic Elford, Denny Hulme and Peter Revson were on the grid that day, with Stirling Moss as the Grand Marshal, and as as the decade progressed more world renowned aces behind the wheel such as Jody Scheckter, Mario Andretti and Keke Rosberg raced there.


Also by Graham Read...
Mercedes On Top After The Opening Three Day TestAlfa Romeo’s C39 Completes The F1 Class Of 2020The Williams And Racing Point Formula 1 Car LaunchesAlphaTauri Makes A Striking Arrival﻿Mercedes’ 2020 Silver Arrow Breaks Cover
It’s true to say that over the intervening period the circuit has had its fair share of ups and downs in terms of its fortunes, just like many other racing circuits around the world, but the intervention of Don Panoz helped to steer the facility in very much the right direction both financially and in terms of the quality of the venue on and off track.

These days the Michelin Raceway Road Atlanta is benefiting from yet more investment as a brand new multi-storey Michelin Tower building is being constructed alongside the grid and its many functions will include accommodating race control, a new media room and corporate hospitality facilities. The impressive structure should be ready for its official opening later this year at October’s major Motul Petit Le Mans race weekend. 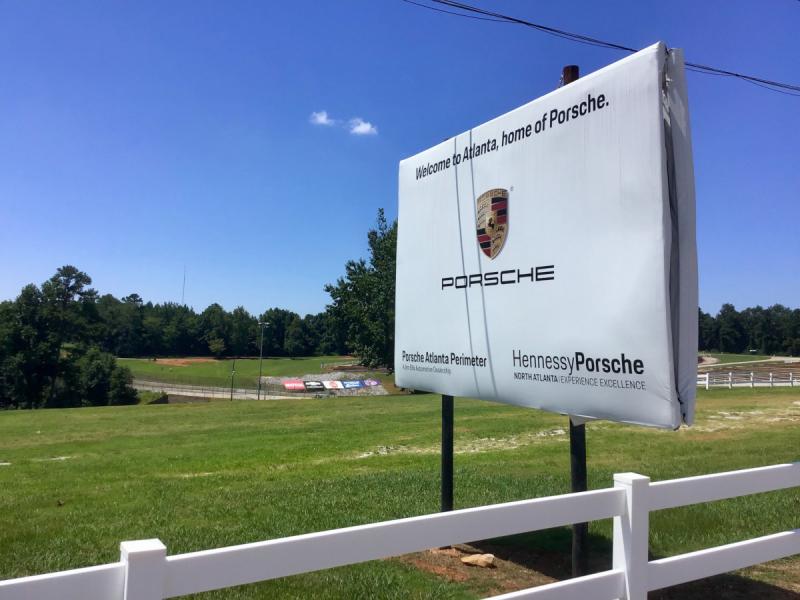 In addition to Chevrolet, iconic German brand Porsche also has its own links to the venue and Georgia
A multitude of varying level racing events, for both four and two wheeled machines, take place every year alongside many track day offerings and manufacturer private testing. The circuit is also highly fan-friendly, with a plethora of viewing locations, including a 10,000 capacity seating area at the Turn 10 complex and new toilet and shower facilities. Part of the circuit’s success is down to the fact that ticket costs have been kept at sensible levels and children aged 12 and under are admitted for free.

There’s so much more to explore too all around the Deep South states that I can really recommend including a visit to Road Atlanta as part of a US road trip and, as we left the circuit, I was already thinking about the possibility of a return to coincide with a major race weekend there.