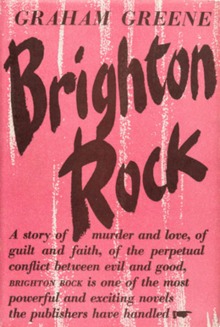 Much has been said about Graham Greene's 1938 novel, Brighton Rock. As with all serious novels, to the intellectual reader there are numerous themes to explore and analyse and this is where I should confess to my own limitations. I have no contextual knowledge of Brighton in the 1930s, I know nothing of gang warfare either then or now, and I have little understanding of Catholicism, or how it influenced Greene. In the introduction to the edition I read, J.M. Coetzee describes Greene as a writer who “interrogates the lives of his characters from a specifically Catholic viewpoint.” I cannot do that.

I also lack the ability, through my profound lack of recall, to draw comparisons to other works of literature. So, the reader might legitimately ask at this point why read what I have to say about this work by one of the last century's greatest writers? My only answer to that fair charge is that I can respond, and I do have an opinion. Counter to those insisting on the necessity of contextual awareness, perhaps measuring a novel’s impact in ignorant isolation is a way to assess the power of the prose and the efficacy of authorial communication.

I began Brighton Rock knowing that the central protagonist, Pinkie Brown, is (as per the blurb) a “figure of pure evil”. Some might assess what constitutes “evil”, but for me, Pinkie is not pure evil. His evil is a by-product. He is misguided, he is pathetic. He is so detached from reality that his artificial universe does not function alongside the rest of humanity. In summary: he is a child.

I observe a theme of displacement running throughout the novel. It is manifest in the more recognizable character stereotypes: the journalist Hale with his disgust of the crowds, resulting in a feeling of guilt and loneliness; he and the crowd are of the same class. After his third gin, he determines that it is the "condemnation" of his higher pay grade which sets his apart from the masses.

This displacement is reflected in the sense that the reader is always kept at arm’s length. Characters are described from the start as if they are already familiar to us. Dialogue is exchanged with the assumption that we readers understand what is taking place. There are many questions left unanswered: open, I suppose, to interpretation as the novel progresses, yet I feel that we can never get close enough to any of the characters to truly understand them, or their motives. And in that sense, the novel, to me, remains distant. It might be that we are not supposed to get too close. Rose, the pitiful teenage waif who falls under the spell of Pinkie, is frequently warned of the consequences of getting drawn in, getting involved. Perhaps we should heed the same warning.

And nothing invites you to come closer. It is not an easy read. Provocative of thought, a complex grouping of characters crowded on a small stage: you read not to find out how it all ends, or whether Pinkie will get his comeuppance, but with a curiosity to see what Greene does with the book, its themes and its questions. Your curiosity draws you in against your will. You do not like Pinkie; you don't care for Rose. Even Ida, the amateur detective hellbent in her pursuance of Pinkie, you do not really understand. I can think of only one character that arouses a shred of sympathy in me, but even that comes with a large caveat.


Graham Greene in 1939
The novel is gritty, for want of a better word. Perhaps it explores the inevitable weakness in the human character. Pinkie and Rose, drawn together ultimately into a sham marriage, are two minors in an adult world. They cannot think like adults, they seek connection as a child might. Pinkie is deeply conflicted. He appears to be running scared from his past, ashamed of his fear, ashamed of himself. His virginity appals and disgusts him as much as the prospect of intercourse, but he cannot be both a man and a virgin.

He is told others don’t think him up to the job of being gang leader. His default response to all challenge and fear is violence and venom. Violence causes consequence, which prompts fear, so more violence; a perpetual vicious cycle. Pinkie controls Rose like a bully would take charge in a playground. He talks almost in code and doesn’t give straight answers. But even Rose is something of an enigma. One has no faith in Rose's ability to comprehend what is being said to her, she looks on the world with naivety. Some truth filters into her brain, some form of realisation, yet it is so clouded by illusion, she is so easily influenced. She is living in a fantasy world.

And so too is Pinkie. We know he killed Hale, "brutally" (although off camera), yet when he experiences pain after a gang fight at the races, it is described as if a new experience to him. Perhaps it is because he feels the actual pain. When he inflicts pain, it is unreal, inconsequential. But this physical pain stirs his dormant faith, and hints at some concept of consequence. He fleetingly considers a confessional box, he is by birth a Catholic: the "eternal pain" (of hell) meant little to him before, but "now it meant the slash of razor blades infinitely prolonged."


Also by Caroline Spalding...
Artistry Of Lancashire: Maria ClancyReview: Anyone For Edmund? By Simon EdgeNorthern Artists – Mark BurgumCurious Stones Of Ilkley MoorReview: The Decadent Society By Ross Douthat
Rose too is Catholic. She enters their marriage deluded by the prospect of his "love" and becoming a woman. She knows their register office marriage is a mortal sin, but she embraces it because she truly believes she is loved. I personally don’t quite understand exactly how Pinkie convinces her to enter this arrangement; I just accept its place in the plot. Her pursuance of domestic settlement, that fantasy, that farce, is created initially from fear. She is a child blindly in need of comfort. After the marriage is reluctantly consummated and the prospect of childbirth eventually dawns on her, she does not display true understanding: they wouldn’t be Pinkie’s children, they would be his “army of friends… If they damned him and her, they’d have to deal with them, too.”

I would suggest the novel is also about futility and inevitability. Pinkie fights a losing battle against his disgust of sex, he starts to drink. Drink is the demise of his lawyer; his gang friends have unrealised dreams of alternative lives. Pinkie knows nothing of the world beyond his constricted borders, he will not live to discover them. Even Ida returns to her Ouija board and considers reconnecting with a former lover as the narrative concludes. Ida, the sometimes motherly, often irritating interferer is key to the book but drops in and out of the story. You cannot like her much either. Life, it seems, is a form of prison. The protagonists are prisoners of their ignorance and self-delusion, they are prisoners to their inevitable destinies. Rose returns to Catholicism which she had apparently cast aside for Pinkie. He is trapped until the end in the belief he must answer one murder with another. We do briefly understand his preference to be simply carried by the tide, accepting any fate so long as it removes his need to make a decision. Another entrapment. The novel, to me, reflects the inevitable devolution of entropy.

There are a myriad themes I haven’t touched upon in this response. Perhaps a testament to the power of this novel is its complexity: the extent of the web a reader can begin to untangle.

From the start you know this won't be a novel to titillate or amuse. You suspect there will be no real resolution or happy ending; the reading experience is not one of joy. Yet, it is worth it. To experience the writing of Greene, his skill with words, his ability to capture you as a reader. Something draws you in, something makes you stay. I perhaps wanted to see how the plot, which struck me as somewhat unbelievable, would conclude. I wanted to discover how the disjointed and deluded characters reached their apogee. It does not, at least to this reader, offer resolution. But it does provoke thought and consideration in spades. You might reflect on ‘what am I being asked to question?’, or you might, like me, simply have a reaction.