Age Shall Not Weary Him Nor The Years Condemn 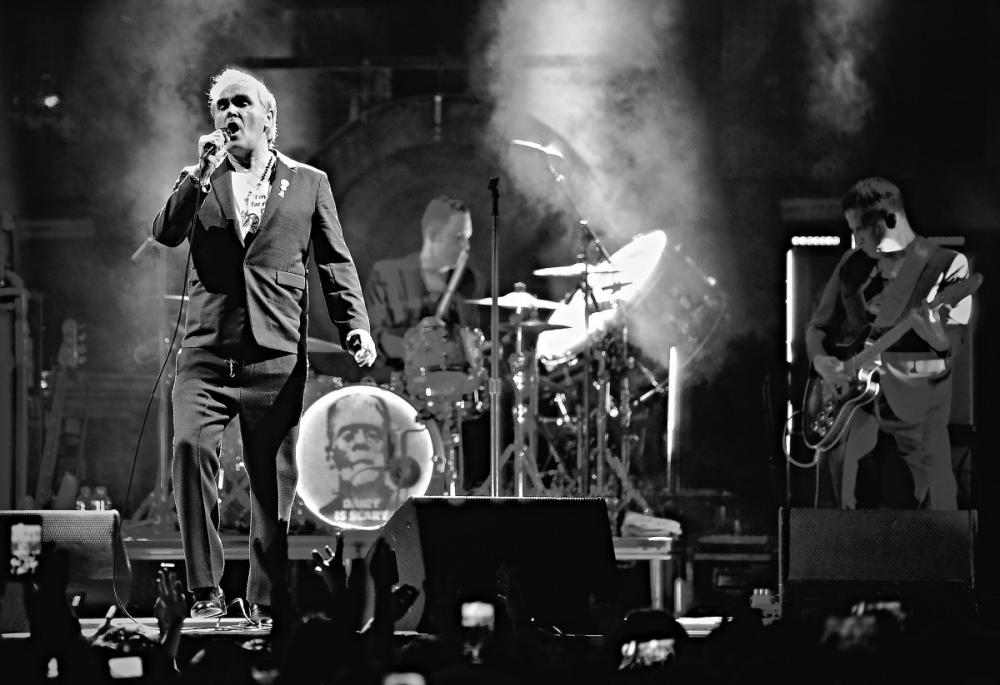 On American Independence Day in 1981 I went with 3 friends to see Iggy Pop play Manchester Apollo. I was 18 years old. We thought we better had – Iggy had been on the scene for just over 10 years and we figured he wouldn’t be going on much longer so it was then or never – he seemed over the hill to us. It was a great show and if my memory serves me correctly he hurled a microphone stand into the audience. Iggy Pop continues to perform to this day. How wrong could I have been?

Funny thing is – it transpired that a pre Smiths - Stephen Patrick Morrissey - was also in the audience that night - doing exactly what I’m about to do right now – write a review. I recall that his review was quite critical of Mr Pop. 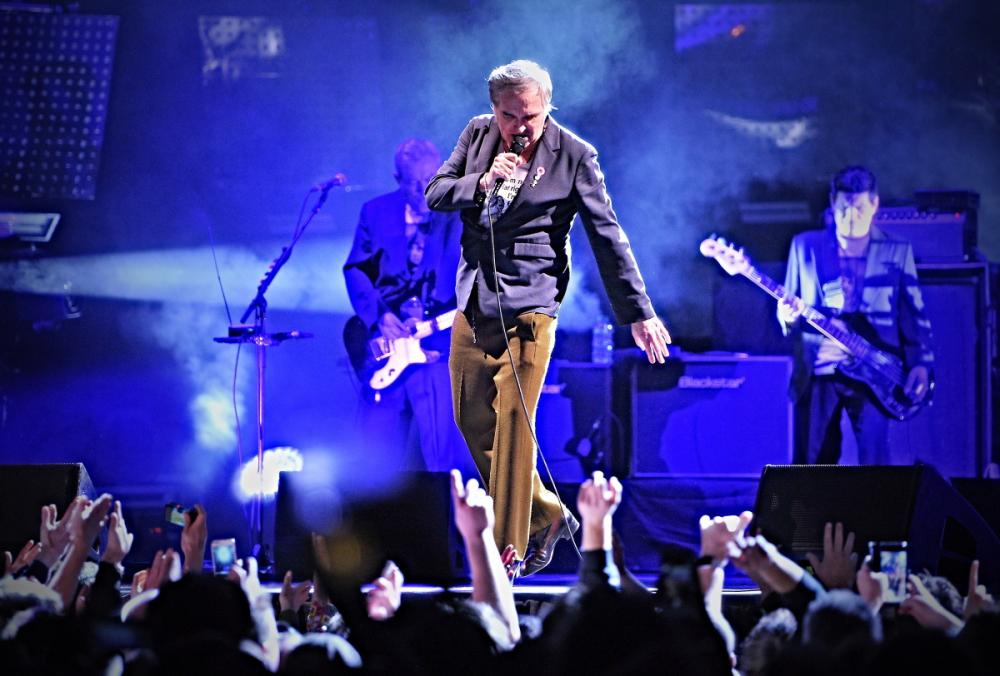 I tell this story for no other reason than to illustrate how some artists transcend time – they are ageless. Despite the fact that Morrissey is 60 – the show presented tonight was powerful, energetic, polished to within an inch of its life and his voice was as good as I’ve ever heard it. This Field Marshal of popular music has many more miles to travel and songs to sing. Let’s hope so at least.

The Morrissey show was preceded by a film. I didn’t get there in time to see it but this is familiar territory. There is nothing unusual in not having a support act other than a retro film of pop music at a Morrissey concert. There are some striking images and it sets the tone for his unique vocabulary of iconic photographs from down the years.

I was too busy getting my camera set up to remember the first song – apologies for that but at least you can see I’m treating the piece with a good deal of honesty.

I Wish You Lonely and The Boy With the Thorn in His Side hit the crowd right between the eyes. The Jerry Fuller song Lady Willpower quickly followed and it sounded immense. In fact – the sound throughout the gig sounded immense. The whole concert was crystal clear from start to finish and it was a credit to the sound guys and Leeds Arena. 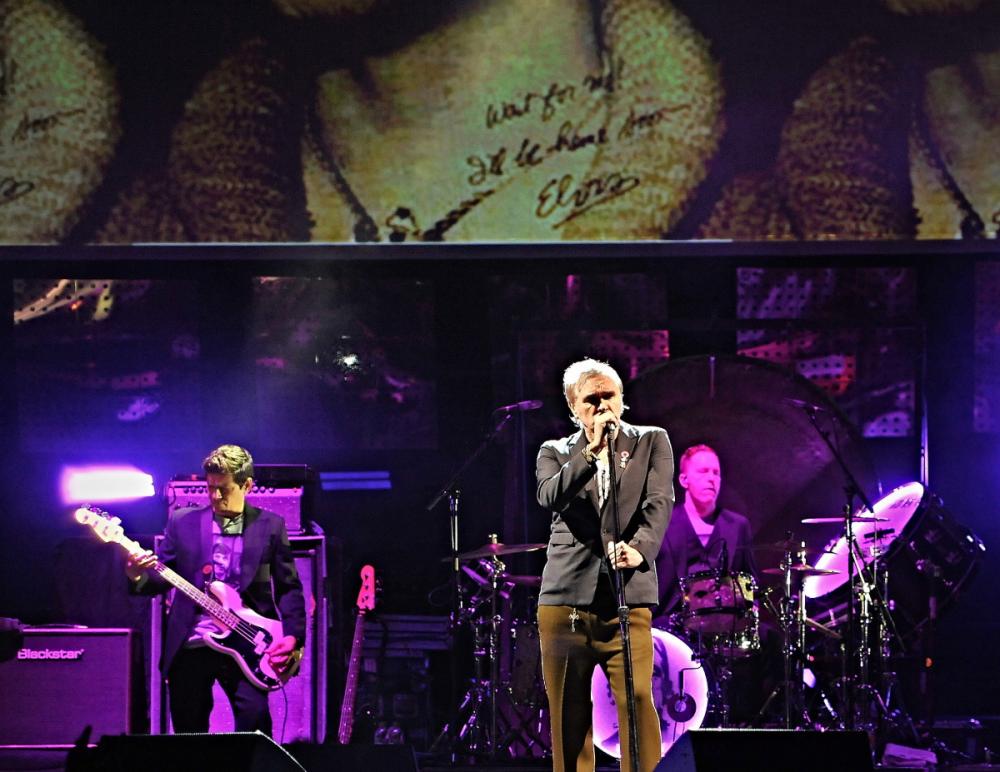 I thought at this stage though - the set lost momentum somehow for 3 or 4 tunes. The songs were played and sung beautifully but it wasn’t until Munich Air Disaster 1958 - with those haunting images projected on to the back drop - that it started to pick up again.

A belting version of I’m Throwing My Arms around Paris was preceded by a piano solo – half classical/half New Orleans honky tonk. The backdrop could be nothing else than a riot torn Paris populated by Gillet Jeune.

Morrissey was typically funny and unusually chatty throughout. He’s really never hard to listen to. His between song patter is welcome and entertaining. He displayed some angst about the reviews to follow – “don’t get upset when you read the reviews tomorrow – they’re already written”. A gritty perspective from a man who has had unreasonable amounts of print focussed on his every word of late.


Also by David J Markham...
Exhibition: Henry Moore: ConfigurationAfter Leeds It Must Be York….The Specials - Leeds O2 Academy - Would You Vote For Them?David Byrne - A Real Live Talking HeadFrom A Boy To A Man. From A Man To A King
Last time I reviewed Morrissey at Leeds I was labelled a racist on Twitter by an artist whom I’ve never met and knew nothing about me. Guilty by association so to speak based on what? On that particular occasion Horace Panter from the Specials lent his views on me and believe me they were far more accurate and I thank Horace to this day for my defence. The offending Tweet was removed but no apology was forthcoming. We live in a sad world where people jump to conclusions and write uninformed twaddle when given half a chance.

The Chrissie Hynde song Back on the Chain Gang got an outing and has now become an audience favourite. I’ve Changed my Plea to Guilty was exceptional and played on a stage bathed in red light.

His able band of men were solid from start to finish. They wore suits and looked sharp. Jesse Tobias on guitar was on the money with every note. He creates an ultra-polished - sharp sound - that has been honed through many Morrissey tours and recording sessions. Boz Boorer seemed to be changing instruments – from guitar to keyboard, it looked like, and back again. It’s just a fabulous wall of sound for Morrissey to embellish with his distinctive delivery.

Jacky’s Only Happy When She’s Up On The Stage finished the set and it was an incredible set closer. I’ve liked this song from day one and tonight the band brought it to life like I’ve never seen before.

The encore followed finishing with Irish Blood English Heart. Off came Morrissey’s shirt and forward to the front of the stage came Tobias and Boorer. What a marvellous end to a Morrissey show. 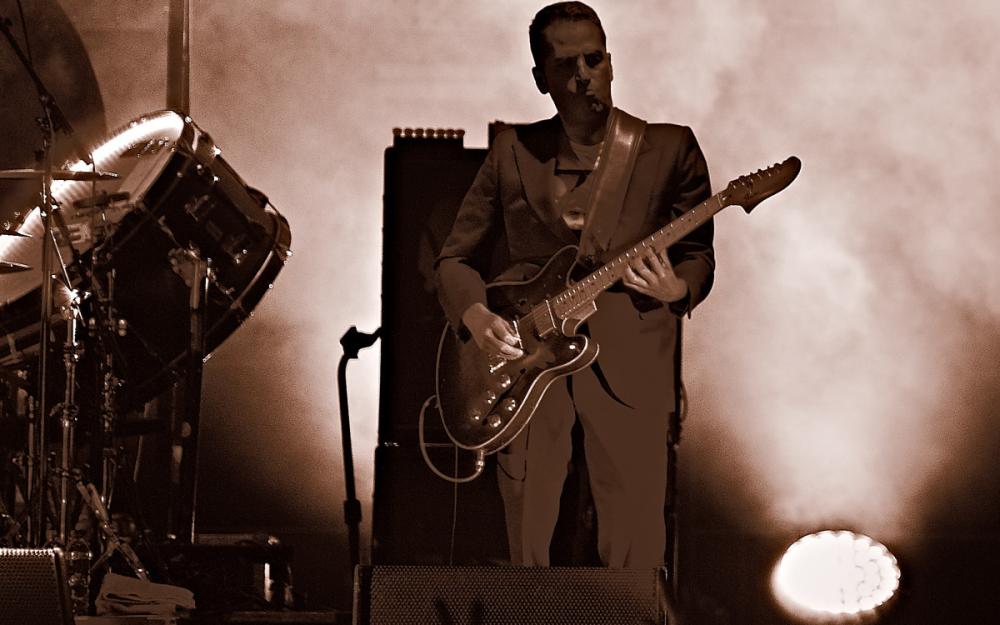 Morrissey could literally play for hour upon hour with his vast back catalogue to plunder. You know what? - I am convinced his audience would stay until the very last note had rung out – you could literally be there for days…

Only one small complaint and it’s always a risk. I was sitting behind what was practically an old age pensioner who was drunk and chanting like a football hooligan spilling beer everywhere. He was then joined by his mates. All equally drunk. They formed a sort of Berlin wall of oafs. Why can people not be more respectful?

All in all - another mature and solid show by one of the all time greats. He still has it in spades…..move over Iggy Pop – Morrissey is here to carry the torch…Cologne, Paris and London await.