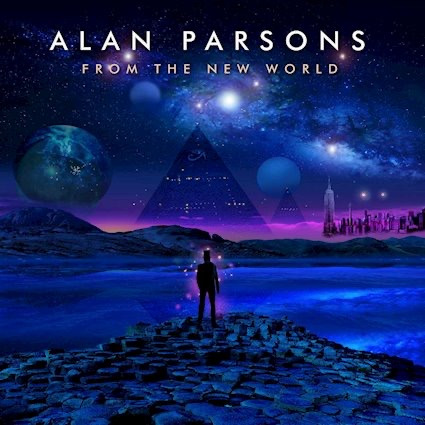 The Grammy Award winning musical icon released his previous studio album The Secret back in April of 2019.

From The New World continues with the classic sound Parsons has become known for during his impressive 50+ year career by fusing progressive, symphonic, and classic rock elements together throughout this new album.

Besides David Pack and Joe Bonamassa, guest appearances include Tommy Shaw of STYX and American Idol alumni James Durbin, all of whom blend seamlessly with Alan and his incredible band. Other featured APLP vocalists are long time lead singer P.J. Olsson, Todd Cooper and Dan Tracey

Listening to the opening track, Fare Thee Well it appears that nothing has changed drastically from the last Alan Parsons' album. If you enjoy well crafted, melodic rock songs you will find plenty to enthuse you with this welcome return.

In an age of auto tuned singers and new albums sounding as if they were made to measure it is a pleasure to hear that the old masters are still working hard at their craft.

There are songs here though that show a nod to more recent groups - The Secret could even be The Stone Roses on a good day, Halos has a mid eighties feel, ultimately though the sound belongs to Alan Parsons, witnessed most pleasingly on You Are The Light.

The old chestnut, Going Home is an unexpected surprise, though given the news of Parsons recent “serious spinal issue” perhaps the lyric is more pertinent than first thought.

The album ends on a more upbeat atmosphere with the inclusion of The Rosette’s 1963 classic, Be My Baby concluding what otherwise is a mellow and introspective album.

Also by Graham Clark...
The Return Of Bingley WeekenderInterview With Dave Hemingway - Ex Beautiful South SingerAlbum Review: James Taylor Quartet - Man In The Hot SeatAlbum Review: Berries - How We FunctionInterview With The Brooks