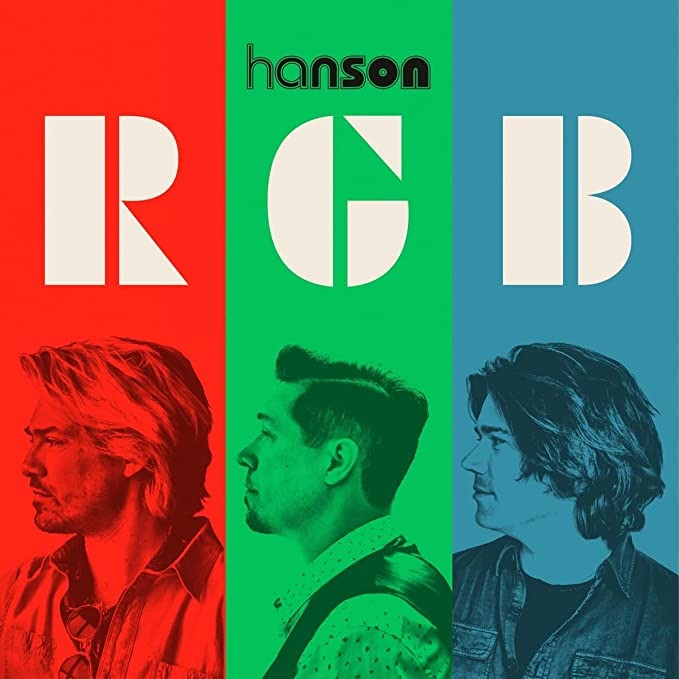 Having taken a moment to look back over their career to date by re-recording a double album with the Prague Symphony in 2018, they spent 2021 releasing a single a month to build up their album, Against The World, and appearing on the US series of The Masked Singer. While Taylor Hanson has experimented with other projects, their latest album is the first that sees all three members exploring solo terrain simultaneously, and rather strangely, together.

Red Green Blue is an album is three parts. Red (Taylor) opens the record, followed by Green (Isaac), while youngest member Zac closes on Blue. With five songs contributed each, the 16 track album also features a demo of one of Taylor's tracks, Child At Heart, to complete the set. With the album in three parts, does it work a body whole?

Before we look at the complete record, let's break it down a band member at a time. The album inevitably opens with Taylor, who for many is the most recognisable of the trio. Having vocalled the lion's share of their releases, his is the voice that most will immediately know. He opens his section with previous single, Child At Heart, which is a uplifting blast that oozes optimism. Arguably the most country leaning of the brothers, this is further echoed in both Rambling Heart and the reflective Truth, however, it is in the 80s blues bop We Belong Together that Red shines the brightest.

Usage of similar instrumentation means the journey into Green is seemingly effortless, thought the gravellier tone of Isaac's voice certainly sets it apart from Red. Although stylistically not overtly dissimilar to his younger brother, Isaac is certainly the most introspective of the songwriters. With an almost old school Country vibe fused with a clear love of a cappella acts, the strength of his vocal really shines on the powerful The Gift Of Tears. Yet it is in the more upbeat and joyous Write You A Song that Green really excels.

Where Red and Green journeyed happily into one another, Zac's Blue stands out immediately in the pack. With a defiant vocal, the early Maroon 5 feel to Blue shows that Zac is unafraid to stand out from the mix. This is his chance to show his true artistic nature and he is going to fully embrace it. While Wake Up and World Goes Around feel very The Walk and Anthem era Hanson, the high energy of Don't Let Me Down and Bad show that Zac brings a radio edge to the trio.

While Red Green Blue is a concept album that could have failed to work as a body whole, it interestingly lifts the trio to a new terrain that needs further exploration. While lead vocal and songwriting duties have been shared over the course of their career, this is the first real insight into who they are as artists without each other. It is eclectic but united. These three brothers know who they are, but they know that they get their best results when helping each other to craft together.
Also by Jeremy Williams-Chalmers...
Album Review: Paolo Nutini - Last Night In The BittersweetInterview With Brooke LawInterview with HatariAlbum Review: Will Young 20 Years: The Greatest Hits.Album Review: Harry Styles: Harry's House