Mabel - About Last Night
About Last Night; Animal; Let Them Know; Shy; Definition; Good Luck; Take Your Time; Let Love Go; Overthinking; Crying on the Dancefloor; I Love Your Girl; When The Party’s Over; LOL. 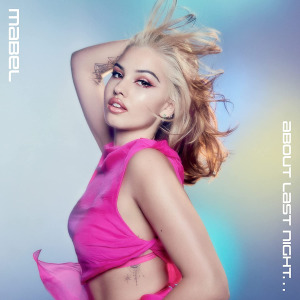 While the singles charts seem to be awash with solo female singers so auto-tuned to death that they all sound the same, it is a relief to hear Mabel yet again standing out from her peers on her second album - About Last Night.

The whole album feels and sounds like a good night out with the singer embracing pop, disco and hi-energy over the course of this sparkly yet unpretentious album.

Mabel much like Dua Lipa knows the value of a good song. Employing a list of songwriters from America and Britain the quality never drops with every song having a commercial edge.

Highlights include Let Love Go, which should be heard in every disco from Iceland to Ibiza; Animal could be a Kylie track whilst Let Them Know utilises a solid House music groove that takes Mabel to a higher level. The song was released as a single last summer but never ignited the charts.

When The Party’s Over might be the sound of the party coming to a close, though when Mabel decides to go on tour to promote the album you can be sure that it will be one of the best parties you have experienced.

A good dose of feel good music with songs that will lift your spirits.
Also by Graham Clark...
The Return Of Bingley WeekenderInterview With Dave Hemingway - Ex Beautiful South SingerAlbum Review: James Taylor Quartet - Man In The Hot SeatAlbum Review: Berries - How We FunctionInterview With The Brooks