Regular readers of my scribblings may have stumbled across my recent review of A Swim in A Pond in the Rain by George Saunders. Ostensibly a book written for writers to benefit from its playful technical musings and acutely mined insights, but one of equal value for any reader interested in the dynamics underpinning fiction’s artistic energies and the active principles at play during the act of reading per se.

Revisiting Saunders’s back catalogue after reading his latest offering amplifies the joy to be had from this hugely entertaining work, shedding light upon previous long and short form works in his oeuvre, whilst simultaneously deepening our understanding of the author, his method and his didactic, satirically articulated pronouncements.

Fox 8 is a forty-seven-page short story written by Saunders and originally published in The Guardian before gaining book form courtesy of Bloomsbury in 2018. Illustrated by Chelsea Cardinal, its tendentiously normative narrative backbone is deceptively simple. The story is told from the point of view of the titular vulpine protagonist in epistolic form - his letter to mankind, an attempt to bring consoling éclaircissement to the perplexing riddle that is humanity’s proclivity towards unkindness and the wanton destruction of nature and the natural order.

The plot, or as Saunders’s would prefer, ’meaningful events’ of the story are straightforward. A fox learns to understand and speak ‘Yuman’ by dint of closely observing one adult couple reading children’s tales to their young offspring. His linguistic capabilities are a phonetic Lingua Franca consisting of butchered spellings, amusing brachylogy predicated upon ellipsis and charmingly naïve assimilations. Yet, Fox 8, and by extension, Saunders’s is never less than heartbreakingly lucid: ‘One lesson I lerned during my nites at that Yuman window was: a gud riter will make you feel as bad as the Yuman does in there Story’.

Fox 8 lives in a verdant wood abutting an iconic American suburb along with his fellow foxes, his life one of innocent, unmolested arcadian simplicity. Then, he reads a ‘sine’… ‘Coming soon, Fox View Common’. A shopping mall is about to obliterate his environment, eudaimonia and brutally shatter his fundamental understanding of society, both vulpine and human. Events escalate from the innocuously puzzling, through to an existential crisis as jarring as it is ineluctably deadly.

Now, here’s the trick…Saunders does not attempt to eviscerate the diseased, morally bankrupt forces gnawing away at the rotting bones of society’s values and vices by way of a vituperative castigation or elegantly worded admonishment. Instead, he employs a far more potent tool; the superficially innocuous, but profoundly didactic force of the fable.

As a literary genre, the fable connotes a succinct fictional story in prose or verse form featuring animals, legendary creatures, plants, inanimate objects or the forces of Nature herself, each anthropomorphised in order to illustrate a moral lesson. The oral tales of a Greek slave thought to have lived between 620-564 BCE were given literary form three hundred years after his death, and now form the corpus we all recognise as ‘Aesop’s Fables’. Saunders, like many others before him, has added his warm, but stridently satirical voice to this powerful morally educative canon.

Contextualising Saunders’s outpourings in terms of their literary provenance and derivation is helpful. David Foster Wallace identified a trend in contemporary writers in his 1993 essay, E Unibus Pluram. He postulated that a new literary movement was forming as a consequence of writers rebelling against the obscurity and nihilism of modernism and the self-conscious detachment of post-modernism.

Such practitioners ached to address the petty and the profound concerns of mankind, treating both with equal ‘reverence and conviction’. This anti-ironical focus has subsequently been coined as ‘new Sincerity’ and Saunders is the epitome of its aesthetic and intellectual singularity. 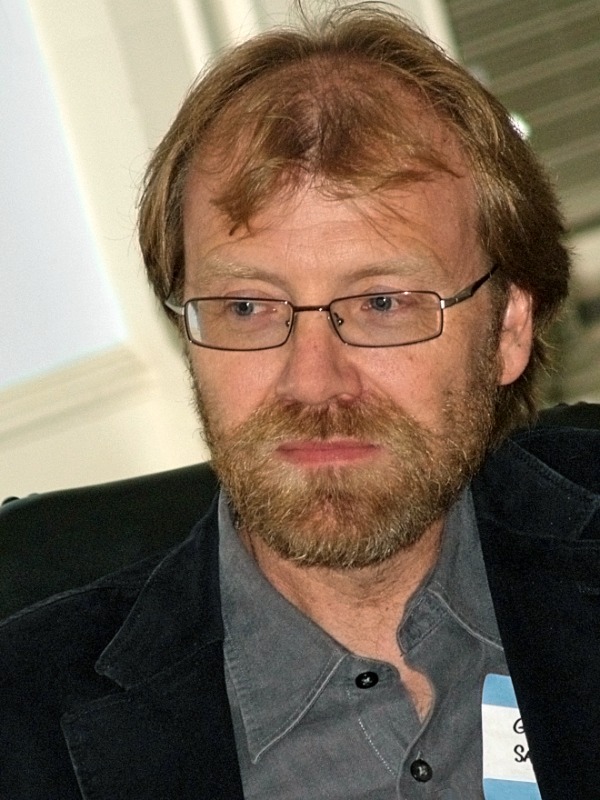 George Saunders. Image - David Shankbone
Let’s take a step back from the book itself and view it through a brief consideration of Saunders himself. Paradoxically, a refractive appreciation of the author sheds elucidatory light upon his deceptively sweet-toned and childishly pellucid tale.

Saunders has written four celebrated short story collections, two novellas and is perhaps best known for his debut novel and 2017 Man Booker Prize-winning Lincoln In the Bardo. He teaches at Syracuse University and in his 2013 commencement speech he tells all we need to know about his conscience and its artistic expression: ‘What I regret most in life are my failures of kindness’. An acknowledged master of satirical nuance, he has found himself beached on the shores of a politically polarised epoch, a challenge for a writer of his ken - ‘Satire is very difficult when the opposition doesn’t accept Enlightenment values’.

His innate faith in mankind and meliorism jars tellingly with his world view, or at least his sense of modern America as he finds her. He once said in an interview with The Guardian, ‘So many of the things that Trump exploited were liberal ideas. Income inequality, shitty education, the degradation of the middle class…It’s a sad time I think’. So, we know his literature is that of protest, of rebellion and designed to both entertain and constructively enlighten, all rooted in a consciousness inextricably pained by humanistic sympathy for his fellow man.

In the same interview, he went on to say, ‘At some point a great country has to have a great animating principle. And somewhere along the way we mistook materialism for our great animating principle…so the way philosophy or spiritual life got out of our animating principle is interesting’. Another enormously illuminating comment further helps us to understand his artistic ends ‘There’s a lot of hypocrisy, and a lot of power getting more power by shitting on little people, which is the oldest American story’.

Turning back to Fox 8 with the above in mind, the choice of a childishly voiced allegorical fable begins to twin perfectly with our author’s sensitivities, ideological imperatives and creative objectives. His story ‘Adams’ took a ridiculously asinine argument between neighbours and developed this incongruously facile conflict into an examination of unspeakable human cruelty. The stories in Tenth of December all become increasingly disturbing, each hinging on an unexpected escalation in mayhem.

His debut itself has been described as both bizarre and impenetrable. A pattern is emerging…Saunders enjoys the artistic challenge of winning over his reader, not by simple charm or unassailable clarity, but by deliberately setting his stall out in opposition to their expectations and exploiting that tension.

He once said, ‘I say there’s a fox and he can spell, I go “Oh yeah; we can do something with that”. And the reader, you may go; “Ok, I don’t know”. And that’s a perfect relationship – for me to be saying “I think this’ll be fine” and you to be saying “I don’t think it’ll be fun”’. Fox 8 gives us a talking, quasi-literate fox expressing himself by way of the fable form and Saunders is counting upon our lack of credulity. He wants to draw the cynical reader into his bizarre fictional world and light the touch paper of revelation, catching them off guard and unable to avoid the blast of his didactic message. Kafka did this with his discombobulating Metamorphosis and Gogol with his existentially sardonic short story The Nose and most potently with his faux-comic magnum opus Dead Souls.

Thematically, Fox 8 is an exploration of human kindness and its lamentable absence. It’s a barbarous condemnation of materialism supplanting environmental truths and the corrupting decimation of the very fabric of societal morality. From Fox 8’s plight and consternation, Saunders bridges his fate with that of mankind itself - rather impressive given that Saunders has restricted himself to forty-seven fable filled pages !


Also by Paul Spalding-Mulcock...
…The Blurred Line Between Friendship And Love: You And Me On Vacation By Emily Henry'...That There Was In Me An Invincible Summer': Three Summers By Margarita Liberaki‘Why Endure My Own Dehumanization?’: Assembly By Natasha Brown'Hurt People, Hurt People...': An Ordinary Wonder By Buki PapillonGothic Musings
A Swim in a Pond in the Rain dissects the short story genius of Tolstoy, Chekhov, Gogol and Turgenev to surface the literary devices animating their masterpieces and giving them both visceral power and moral didacticism. Fox 8 dextrously employs and showcases that which Saunders has gleaned from the Russian Masters. We have the tension between expectation and resolution, the ‘Cornfield Principle’, whereby every event advances the plot in a meaningful way, escalation in tension and logical causality driving the story onward.

His ‘gas stations’ serving to refuel the reader’s desire to read on come in the form of vicarious concern for our protagonist, delight at the author’s linguistic plasticity and the tale’s intrinsic energy being constantly ‘rooted to the story’s heart’.

Saunders uses changes in narrative pace to keep his reader fully immersed in his tale, counterpointing moments of Bambi-like innocence with grotesque savagery, romanticism colliding with utilitarian avarice and the pervasive stench of moral inequity and injustice. Simile and metaphor are eschewed in favour of dramatic contradiction. Our childishly naïve story, couched in its splendidly idiosyncratic lexicon, is disturbingly profound, provocative and shockingly adult in sentiment and meaning. Dramatic irony serves to deliver the coup de grace. The reader does not share Fox 8’s misplaced trust in society and its values and must confront truths all too comprehensible to a ‘Yuman’, if not a fox.

So, Fox 8 is a fable in classic Aesopian mould, an homage to the short story brilliance of Gogol, and a scintillating elucidation of the principles Saunders utilises to both read and write truly magical fiction. It’s a poignant and enriching story which stands on its own four paws as a piece of authorially authentic creative fiction, magnetically influencing the reader’s moral compass as it gently warms their bruised hearts.

Like all good fables, it concludes with an instructive moral. Fox 8 leaves his letter to mankind in a ‘Yuman’ post box, its final line, ‘If you want your storys to end happy, try being niser’.


Fox 8 is published by Bloomsbury