Andre Rieu - Shall We Dance? Live In Maastricht 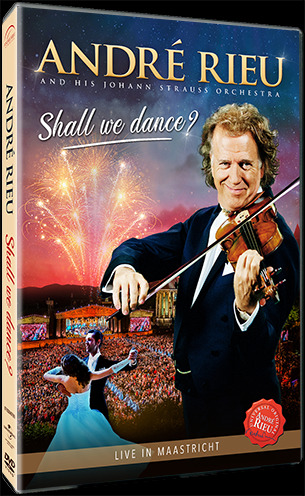 Renowned violinist André Rieu is undoubtedly one of the most successful musicians of our time. Having sold over 40 million albums throughout his career and performing at 90 concerts each year, he has won millions of fans worldwide. Every year ‘the King of Waltz’ performs in the stunning Vrijthof Square in his home town of Maastricht, creating an unforgettable atmosphere full of joy, dance and romance, attracting over 150,000 fans annually from around the globe.

I have been to a few of his Leeds Arena shows and they were very entertaining, mixing his comical style and wit against a backdrop of wonderful music. Even if you are not a classical music fan it was hard not to be impressed.

This new DVD - Shall We Dance? features 28 of the maestro’s all time favourite songs in celebration of his 100th concert in Vrijthof, including a very special award ceremony by the Mayor of Maastricht. The DVD also features international soloists and the camaraderie of the world-famous Johann Strauss Orchestra – tap dancing on their instruments and turning tracks into hilarious competitions for the audience to enjoy.


Also by Graham Clark...
Ward Thomas Head North And Announce A New SingleRock Choir Keep The Country SingingJames Taylor Quartet - People Get Ready (We're Moving On) - Audio NetworkRe-scheduled Shows At Leeds ArenaDua Lipa - Future Nostalgia (Warner Music)
Dedicated to the Waltz, the dance that facilitated the launch of his career over 30 years ago, his fans are invited to immerse themselves in the romance of the most magnificent classical songs, including the beautiful Blue Danube, the White Horse Inn, the Csardas Princess, the Sportpalastwalzer, and of course, the renowned Second Waltz – more romantic than ever with 300 dancers waltzing the night away on stage.

Shall We Dance? also includes beloved Italian favourites such as Volare, Funiculì, funiculà, Ode to Joy, and the majestic Concierto de Aranjuez, as well as the Platin Tenors moving dedication to the Notre Dame de Paris with Au fond du Temple Saint from the opera The Pearl Fishers; and the glorious voices of internationally famed sopranos performing the deeply touching On My Own from Les Misérables, Ebben ne andrò lontana from La Wally and Hallelujah by Leonard Cohen.

If you thought that no one buys DVD's anymore you are wrong - this is one his fans will, but by the bucket load.