Andrea Bocelli Is Coming To Liverpool And Sheffield 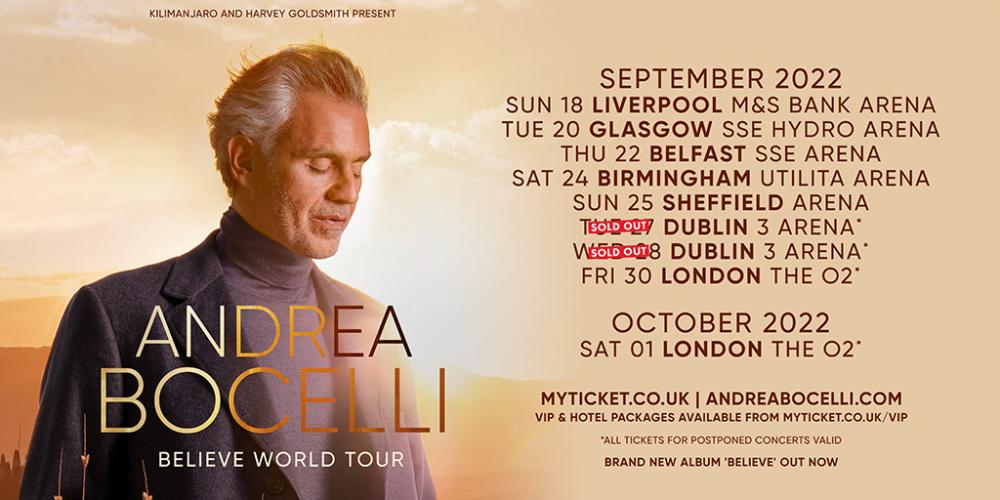 ’The world’s most loved tenor’, Andrea Bocelli, has announced a welcome return to the UK and Ireland in September and October 2022. Bocelli will be visiting Liverpool, Glasgow, Belfast, Birmingham and Sheffield and will also be performing rescheduled show dates in Dublin and at The O2 London.

Musically gifted from birth, Andrea Bocelli is one of the most celebrated singers in modern history, performing at major international events including the Olympic Games and the World Cup, as well as his own sell-out arena shows around the world. He has a Golden Globe, seven Classical BRITs and seven World Music Awards under his belt, plus a star on the Hollywood Walk of Fame. His 2018 album release, Si, reached No.1 in both the US and UK charts.

Despite the global pandemic in 2020, Bocelli was able to create new music – his album Believe contains an uplifting personal collection of songs celebrating the power of music to soothe the soul – as well as reaching new audiences around the world through online streams.

The Italian multi-instrumentalist performed live in his home nation from the iconic venues of Teatro Regio di Parma and Duomo Cathedral in Milan, the latter with over 3 million concurrent online viewers, making it the largest simultaneous audience for a classical livestream in YouTube history.

With a decorated career spanning more than a quarter of a century, having amassed millions of fans around the world with his emotive and instantly recognisable voice, Bocelli has collaborated with a host of A-list stars including Luciano Pavarotti, Ariana Grande, Jennifer Lopez, Christina Aguilera, Ed Sheeran, Dua Lipa, Céline Dion, Alison Krauss, Tony Bennett amongst others.


Also by Graham Clark...
James - All The Colours Of YouCourteeners Have Announced A Massive Hometown ShowTony Hadley Celebrates Over 40 Years In Music With Huge TourGladys Knight Returns To The UK In 2022Wolf Alice - Blue Weekend