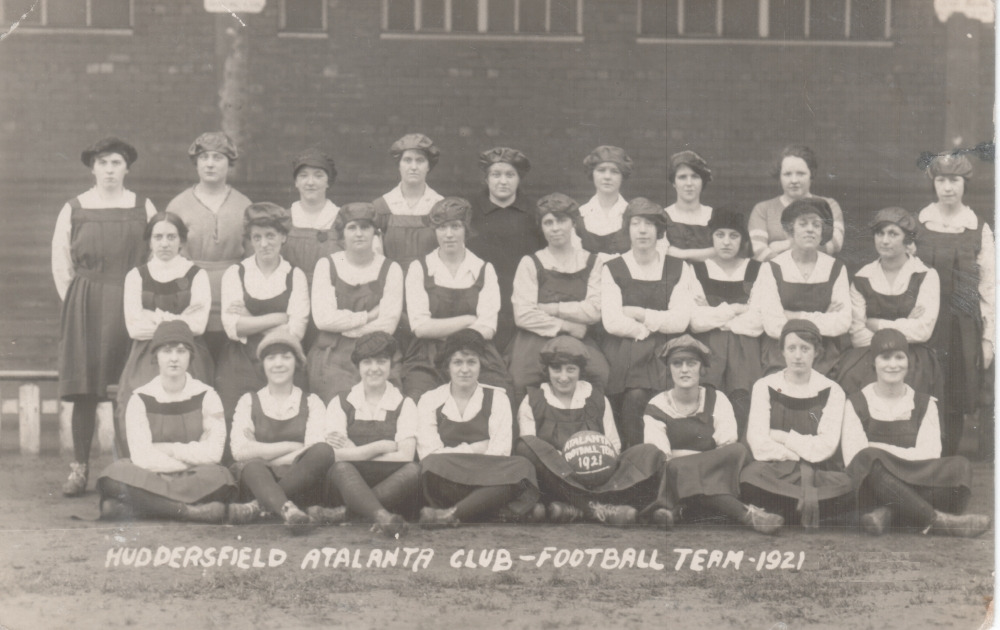 Mikron Theatre are aiming to score with their next theatrical offering for their 49th year of touring. They will be premiering Amanda Whittington’s new play Atalanta Forever which looks at the story of the pioneering women in football in 1920.

Atalanta Forever will kick off at The Piece Hall in Halifax on Wednesday 9th June and then tour nationally by road and river until 19 September.

It is 1920, and in post-war Britain, women’s football is big news. Across the country, all-girl teams are pulling huge crowds in fund-raising games for wounded soldiers. Huddersfield amateurs Ethel and Annie take a shot at the big time. Teammates at Atalanta AFC, they are soon tackling new football skills, mastering the offside rule, and kicking back at the doubters.

Come and cheer for Atalanta as our plucky underdogs learn how to play the game, take on the legendary teams of the era – and find the toughest opponent of all is the FA.

The play is based on the true story of one of three women’s football teams in Huddersfield in post war Britain. Told through the lives of two young women Atalanta Ladies Football Club was formed in 1920 ‘to provide games for the women of Huddersfield, to foster a sporting spirit, and a love of honour among its members.’ During the Great War, several women’s football teams had sprung up around the country, usually based in factories or munitions works, and proved a great success in raising money for hospitals, war widows and so on.

A measure of the popularity of the women’s game may be measured by the estimated 25,000 crowd that packed Hillsborough, Sheffield, for their next game with the Dick, Kerr Ladies of Preston on May 4 which they lost 4-0 to their much more experienced opponents.

In the wider football world, the growing popularity of women’s football was now causing concern. The FA even saw it as taking support away from the men’s game and on December 5, 1921, they banned women’s teams from using FA affiliated grounds.

The pioneering Huddersfield Atalanta Ladies FC raised more than £2,000 for various charities before they folded in 1924.

Amanda Whittington is one Britain’s most consistently popular dramatists. Her plays include Be My Baby (originally produced by Soho Theatre and subsequently staged throughout the UK), Ladies Day and its sequel Ladies Down Under (Hull Truck/UK Tours), Kiss Me Quickstep (New Vic Theatre), Mighty Atoms (Hull Truck Theatre). Other stage productions include The Thrill of Love (New Vic Theatre/St James Theatre), My Judy Garland Life (adapted from the Book by Susie Boyt, Nottingham Playhouse, Bollywood Jane, (Leicester Haymarket/West Yorkshire Playhouse). Amanda is currently an Associate Artist at Nottingham Playhouse.

“I was an 11-year-old footballer in the 1980s, the only girl who played in the boy’s village tournament and I vividly remember being ‘advised’ to stop because it wasn’t appropriate. I still feel the injustice, and the sense of shame for wanting to do something I was not meant to. It brings joy to my heart to see football is now the biggest team sport for girls in Britain. I wanted to write about the battle the women’s game has fought to survive and prosper - and perhaps to tell the 11-year-old me she was right?"

Marianne McNamara, Mikron’s Artistic Director and Director of this show, explains why they chose to tackle this subject:

“Women’s football is making a comeback and not before time. We are thrilled to pay homage to the trailblazing Huddersfield women that paved the way against all odds.”

Just like the great game itself this will be an action-packed play of two halves full of live music fun and laughter with no plans for extra time!


In 2021, Mikron Theatre Company will embark on their 49th year of touring. Based in the village of Marsden, at the foot of the Yorkshire Pennines, Mikron Theatre Company The company are like no other. For starters, they tour for most of the year on board a vintage narrowboat, secondly, they put on their shows in places that other theatre companies would not dream of; a play about growing-your-own shown in allotments, a play about bees performed next to hives, a play about chips to audiences in a fish and chips restaurant, as well as plays about hostelling in YHA Youth hostels and the RNLI at several Lifeboat stations around the UK.

Atalanta Forever will be touring nationally in the Summer alongside Poppy Hollman’s new play A Dog’s Tale which celebrate canines past and present and explores the enduring love between people and their dogs.

For tour dates and information on Atalanta Forever visit http://mikron.org.uk