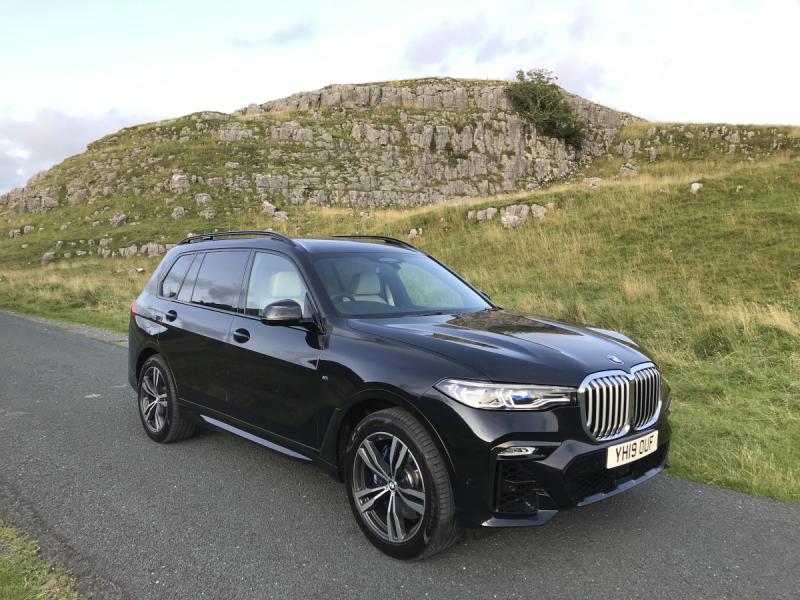 I remember when the BMW X5 was launched in 1999. It was the German manufacturer’s first foray into the world of the SUV. The emphasis was more on sporty on-road driving rather than off-road prowess.

I must confess to coveting one and once a year or two had passed, did contemplate a second-hand purchase, but values remained strong.

Fast forward twenty years and BMW now offers a raft of SUVs for their affluent customers’ delectation, some more desirable in my opinion than others. X1 is the smallest offering, with mid-size X3 and X5 completing the sensible line-up. 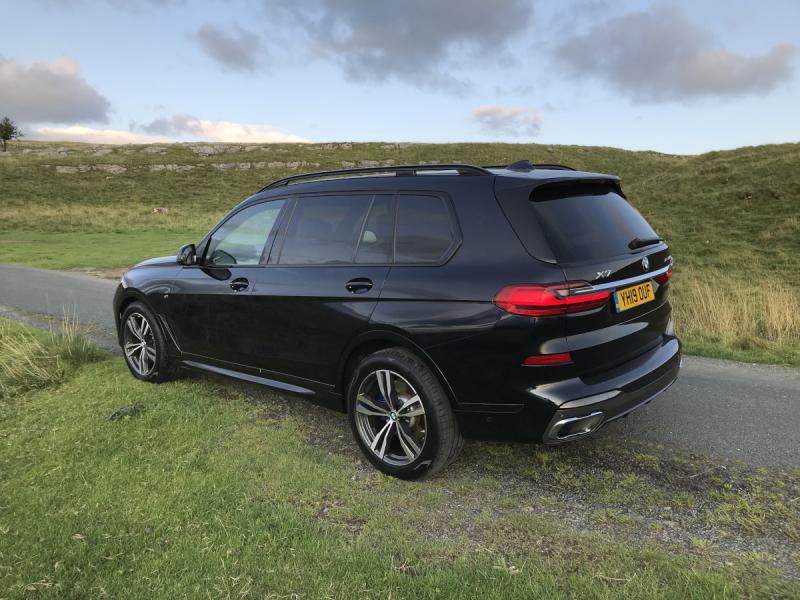 The sleeker coupe-style X2, X4 and X6 models make less sense - style over substance I’d say, but what do I know?

For larger families the X5 is now offered with seven seats, but the rear perches are strictly for children only.

All hail then the new BMW X7, its aim to offer space for seven adults.

I was sadly unable to attend the media launch in Scotland where I gather the day’s testing included some hardcore off-roading. Such a shame but having just spent a week behind the wheel on some of my favourite local routes, I am now in a position to pass judgment.

First impressions are the X7’s rather gargantuan dimensions and the bold front grille. It’s not a car to discreetly go about one’s day-to-day business. 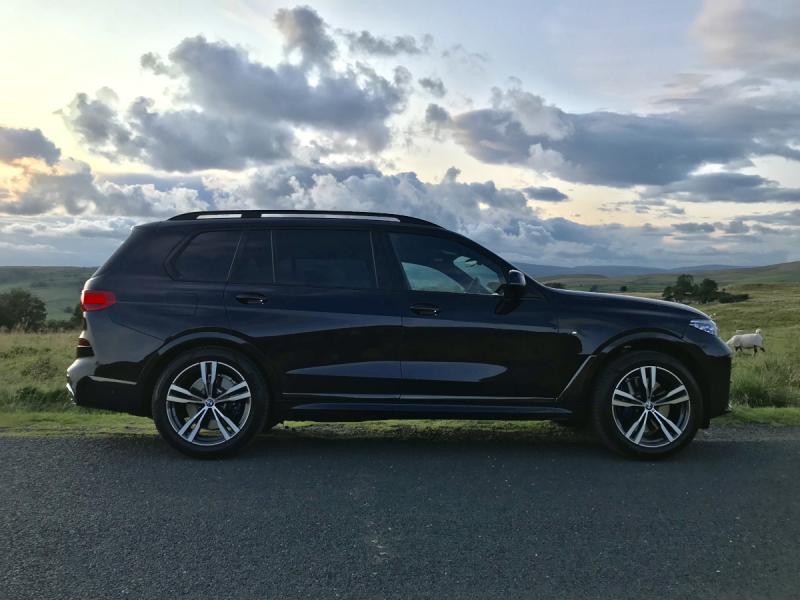 Noticeable are the rear doors, unusually larger than those up front, which makes getting into the rearmost seats a far more dignified experience.

Three six-cylinder engines are offered in the UK, each paired with an eight-speed automatic gearbox. An entry-level 30d costs from £72,195 and uses BMW’s familiar 265hp 3.0-litre diesel engine and that is the model on test here, albeit in M Sport guise.

An extra couple of thousand pounds will get you a petrol-powered 40i, a little quicker but not as frugal.

BMW quote around 33mpg for the combined cycle – I struggled to break through the 30mpg barrier. Goodness knows how the petrol 40i would fare in the real world, fully loaded. 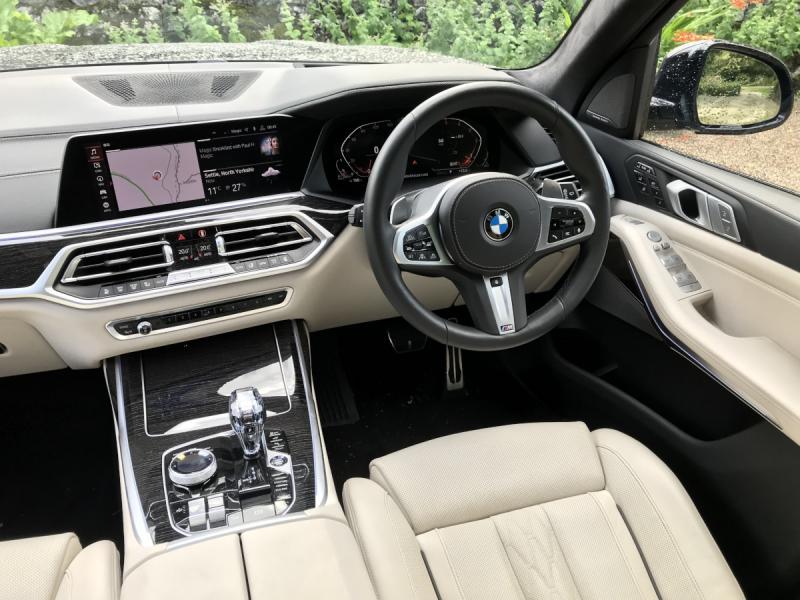 Straight-line performance is brisk for one so large, the engine’s surfeit of torque also providing plenty of power for brisk overtaking manoeuvres. The engine is refined too, only making it presence heard when pushed to the very limit.

Motorway cruising is an X7 forte with excellent straight-line stability and the almost complete absence of wind and road noise. Set the adaptive cruise control and relax.

I tackled one of my favourite cross-country routes, an exciting mix of fast A and B roads. The X7 proved to be surprisingly capable and easy to place despite the car’s considerable girth.

However, you cannot overcome physics and ultimately the X7 rolls rather more on the bends than other X models I’ve driven. Looking at the options list, you can specify ‘Executive Drive Pro’ which aims to stiffen things up. I would tick the box if you enjoy driving. 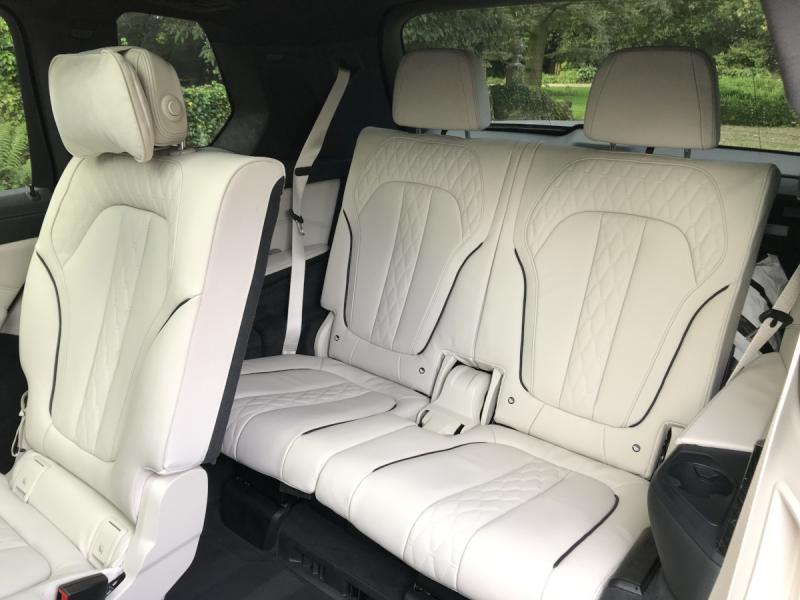 The X7 is air-sprung and offers a cosseting ride even with 21-inch alloy wheels and run-flat tyres.

My off-road excursions demonstrated the BMW’s credentials. Snow, sand, gravel and rock modes together with raised suspension and excellent traction ensured a distinct lack of drama. Capable and reassuring when the going gets tough.

In BMW’s press release, they claim the X7 is a paragon of quality, delivering outstanding luxury and a full complement of advanced equipment features.

And luxurious the X7 most certainly is! Sumptuous merino leather covers almost every surface, with metal or soft-touch plastics elsewhere. Build quality is first rate. 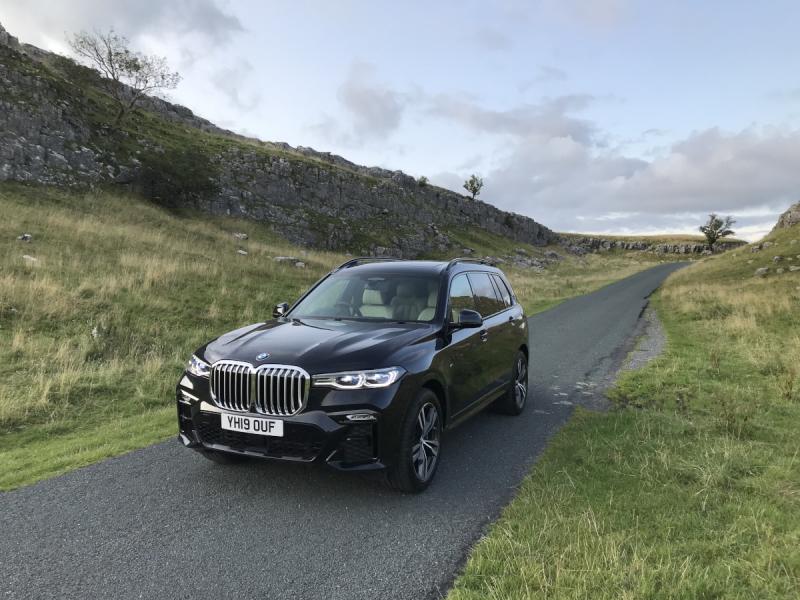 The seats are supremely comfortable not just up front and although a bench seat is standard in the middle row, a pair of individual seats can be specified.

Access to the rear seats is surprisingly good, those large doors coming into their own. My six-foot frame was easily accommodated and with the optional five-zone air-conditioning fitted, keeping cool back there would be no problem.

Even with all seats occupied, there is 326 litres of boots space, extending to 2,120 litres with all the rear seats electrically folded away.


Also by Andy Harris...
Driving Safely In Wet And Stormy ConditionsPeugeot 208 – UK Media LaunchNot So ‘Smart’ Motorways Under ReviewVolvo XC60 T8 Design Pro On TestSizzling Spanish SUV - Cupra Ateca On Test
All cars come with a three-part glass roof which bathes the cabin in natural light, and this can be opened too if one so desires.

Equipment count is exhaustive, but there is still the option to personalise BMW’s largest SUV. Over £13,000 worth of goodies was fitted to my test car. I would take them all.

How then to sum up the BMW X7? Almost unique in its offering, the X7 offers Range Rover luxury, with Discovery seven-seat versatility – no mean feat. The Land Rover offerings will ultimately take you further off-road, but as most owners are likely to do little more than tackle a little wet grass or snow-covered road, an X7 will serve most very well.

The interior’s comfort cannot be understated and there are hints of BMW’s sporting prowess when ensconced behind the wheel.

The bold styling may not be everyone’s taste and the car’s sheer size may deter the urban driver.

But for an owner who boasts a larger family and a healthy bank balance, the X7 is a very desirable product and a well thought out addition to the BMW SUV range.