Beer Of The Month Of December - Magic Rock’s Magic Ingredient

Can a beer be both black and pale?

Well yes, apparently it can, easily. Magic Rock, it seems, can do anything where beer is concerned and their magnificent Magic 8Ball, a black IPA, is the Yorkshire Times’ Beer of the month of December.

A decade or so ago small craft breweries were breaking out like wild fire all over the country. Very many achieved at least modest success but Magic Rock, founded as recently as 2011, has gone on to surpass all expectations. It quickly gained national fame but, after being bought out by Australian giants Lion, in 2019, it is safe to say it is now an international brand.

The question I first put to Richard Burhouse, the genial founder of the Huddersfield-based company which now employs a staff of fifty and produces around three and a half million pints a year, is how was it achieved. Modestly, he wants to ascribe it to social trends, impersonal forces and good fortune. “2011 was a particularly good year to get into the beer business. There was a surging interest in new hoppy American-style beers … The stars just aligned.” 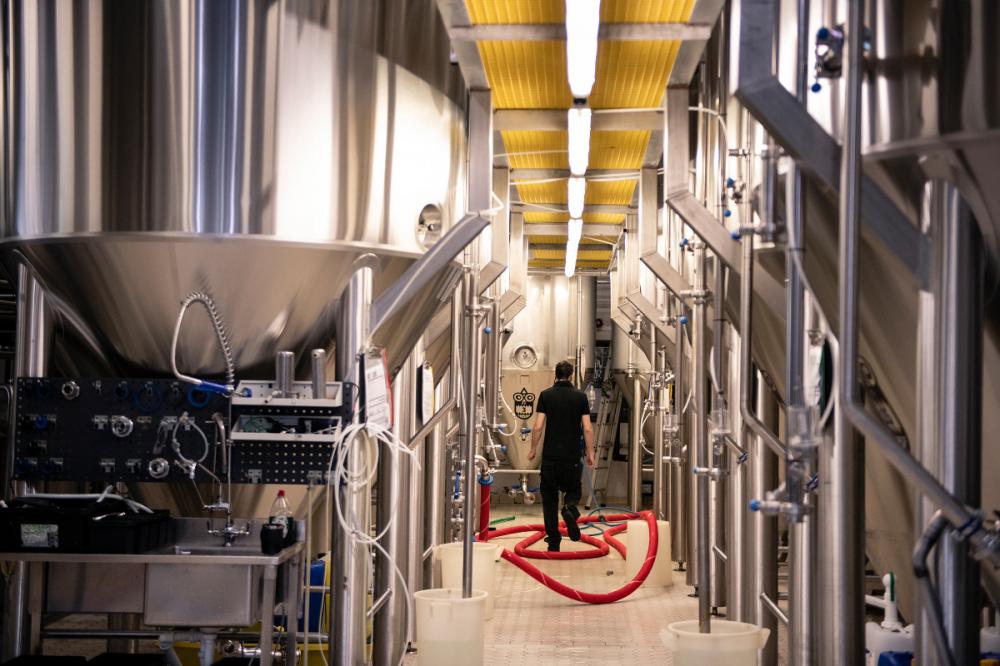 I’m not buying this. I want to know what the magic ingredient was. “Well, yes,” he says, slightly surprised, “I suppose we did put together a very good team and we did all work very hard.” He began first by retailing beers on-line before realising there was more profit to be had by brewing his own. “I was fairly grounded, about 35 at the time with two children.”

He already had extensive business experience through involvement with his father’s firm which sold crystals – hence the magic rock – and he prepared himself by taking a Brewlab course at Sunderland. He also recruited the inestimable services of Stuart Ross who had perfected his brewing skills over a dozen years at Kelham Island and was ahead of the times in being able to capture the style and flavour of the increasingly popular American IPAs.

Richard is keen, too, to acknowledge the sound advice he received from Adam Bamforth, his accountant. Fellow cycling enthusiast Richard Norgate came in to take charge of marketing. He it was who designed the now legendary logos and is still responsible for the colourfully intriguing, slightly surreal cans. “I think you could say we just hit on a formula that people liked.”

I probe to know about the hard work, expect the story of endless years of back-breaking toil I usually hear from those who have made it in the trade. “Nothing massively stressful,” he says. Somehow it seems the passion he had made light work of the early graft, the times when as one of only two staff, he had to do everything including making up the pallets for distribution. “It was good fun,” he remembers.

I ask about the brewery and Richard shows me his serious and technical side: “We have a 50-hectolitre semi-manual brew kit, made by Olympus Automation. We have 1200 hectolitres of fermentation capacity in total with the ability currently to brew around 500 hectolitres per week.”

And so to the Australian connection. “Yes, it was a life-changing deal, giving us mainstream penetration and deals in all the major supermarkets.” He had turned down a number of approaches from other companies but, fortunately as it turned out with Covid 19 soon to strike, he decided the deal proposed by Lion was too good to reject. “We’d gone rapidly from being 12-barrel brewery to 42 barrels, producing 17,000 hectolitres a year. With a much bigger staff we needed help to improve our structure in a number of areas, like safety protocols, human resources etc. It was the right time.”

He thinks about how it has affected his role. “Well, I still have a voice. I’m still involved with senior management.” He laughs. “I still make the decisions but I don’t necessarily have final say any more. On balance I’m very happy.”


Also by Andrew Liddle...
The Lonely Chapatti’s Food For ThoughtThe Nomadic Life At ChristmasTerriers Get The Magic Rock For ChristmasLaughter In The Dark In Leeds - From The Devil’s JukeboxFalsgrave Park, The Town Crier And An Upturned Santa
The success story continues. Even in the straitened times the current output has increased by some twenty per cent, not least because of the supermarket sales and they have so far managed to weather the pandemic with minimal disruption to their Huddersfield operation. They now have a new head brewer, Christa Sandquist, although Stuart Ross continues to be very much hands-on. The new on-site canning machine can - astonishingly - turn out 18, 000 an hour.

Richard who was born in Huddersfield and educated at Honley High takes a strong interest in the local area and is pleased to have played a prominent role in what he calls the resurrection of brewing in Huddersfield. Modest to the end, he reels off a list of Huddersfield-based breweries all of which produce excellent beer.

The interview more or less concluded, Richard pours me a Magic 8Ball. "We first brewed this little number in 2012 and recently revisited it after public demand. I think you’ll like it." Whilst it's settling I get the aroma of pale ale which belies the evidence of my eyes and then I taste it and, “wow”, yes, it's magic all right. A fusion, as the website says, of “speciality malts with a tropical punch bowl of new world hops [delivering] a contradictory yet cultured concoction.” And pretty potent with it at 7 percent ABV!

Somehow it seems entirely right for the season and the run-up to Christmas. “It’s a mash-up between a porter stout and a hoppy IPA,” Richard adds, closely watching my reaction and evidently being pleased by it

“Wow!” I say again. I suddenly realise that is exactly what this fruity-hoppy-malty liquid oxymoron is. There is a heady synaesthesia at work here. I am tasting the sun whilst imbibing the dark arts in the pale moonlight, finding myself seduced by an eight ball of liquid joy, an expression here which I take to refer to something stronger than snooker. You might need an urban dictionary if you don’t get my drift.

In truth, this is but one of their many delightful beers that tend to bring on the good vibe. Their large core range is astonishingly eclectic, all heavily hopped and fruity, all with a hint of magic as can be discerned from names like Dark Arts, Fantasma, Saucery (sic), Magic Lager and Promised Land.

Yes, there is magic in the world.

Oh, and by the way, if anybody wants to know what to buy me for Christmas, might I suggest Magic Rock’s 12 Beers of Christmas, which can be delivered straight to my door in a branded box.