Beer Of The Month Of July: Leeds' Incomparable Best

Leeds Brewery’s outstanding classic Yorkshire bitter is our beer of the month of July. 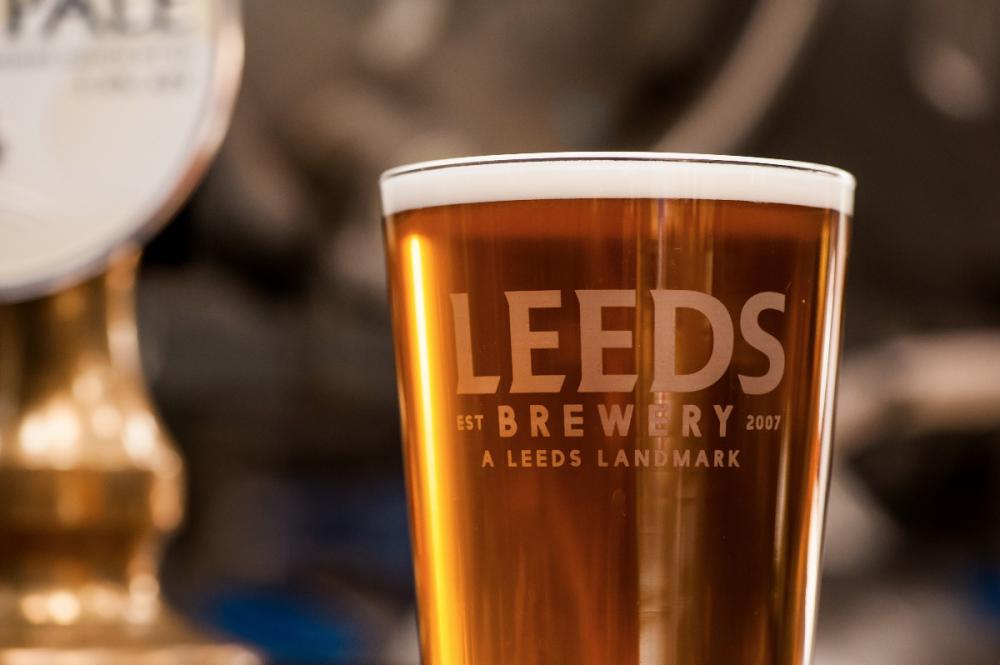 Leeds Best is sold all over the city and throughout the county and I’m anxious to track the lovely stuff to its source. When I arrive at the new brewery, to which they relocated in 2019, in Beeston, nobbut a misplaced Jack Charlton clearance from Elland Road, there is a distinct back-to-school atmosphere about the place. The ten staff, including head brewer, Rob Warriner, have been furloughed for the last twelve weeks and are now back suntanned and bursting with energy and enthusiasm.

Sam Moss, who co-founded the brewery some 13 years ago with Michael Brothman, is somehow finding time to show me round. They were History students at York University when they met, supplementing their grant working at York Brewery. It struck them both that what had been achieved in a handful of years in York might be replicated elsewhere. ‘They were doing okay; why couldn’t we do the same?’ Sam recalls.

This was 2007, a particularly propitious time for new micro-breweries, judging by the number that sprang up around then. ‘There was just beginning to be a concerted move towards local independents,’ he agrees. In Leeds, the ubiquitous name Tetley’s still swung on the sign outside pubs but the market was changing. ‘Maybe people were finding the lack of choice a bit of a bore.’ Tactfully, he doesn’t mention that the red huntsman brand was not what it had been.

However conscious that their new venture might be ‘utterly foolhardy’, the two young men took the plunge, borrowed ‘a load of money’ and set up a twenty-barrel kit, made to their specifications in Dewsbury. ‘We were big for a small firm starting up.’

Both Sam and Michael are real ale men and their original intention, simply to brew ‘incredibly flavoursome, high-quality ale’, that they themselves would enjoy, has served them well. Other discerning people liked them as well and they grew steadily and prospered and their new larger premises have afforded greater flexibility to produce 150 barrels a week, which approximates to 50,000 pints of their core beers and monthly ‘seasonal’ specials.

The brewery is a hive of activity. It’s bulging with tanks and casks – both full and empty. Some are waiting to be washed and some waiting to be filled. Steam rises from the mash tun where today’s batch of Leeds Pale is being brewed. Bags of malt and boxes of hops are stacked against the walls and one of the brewery’s trucks is being loaded ready for its delivery run. 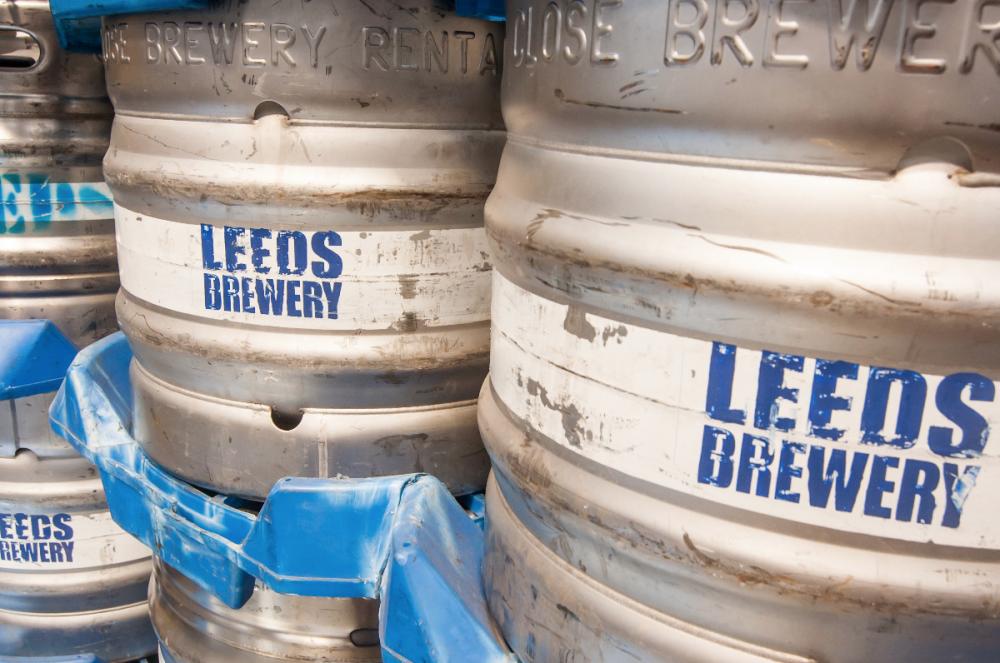 Their heartland is obviously Leeds, where it seems they have permanent lines almost everywhere, being noticeably the beer of choice in so many of the city’s finest pubs, and they supply throughout the county. Sam explains the rationale behind why they have no great urgency to expand further. It seems to be largely a matter of quality control. Both owners see one of their primary - most necessary if most congenial - roles is to be getting out and about sampling their beers in situ. They like to chat to customers and licensees and see their product being served at its peak. ‘We are both passionate about cask-conditioned ales. But we are reliant on somebody else doing their job as well. Beer is a living product and needs to be maintained to the highest standards.’ On rare occasions they have had no hesitation in telling a landlord to take it off if they weren’t satisfied with it.

So they continue to do what they do well, brewing - in addition to Leeds Best - some acclaimed core ales: a refreshing session drink, Leeds Pale (3.8); a light and hoppy Yorkshire Gold (4.0 ); and Midnight Bell (4.8), a dark ale, plus a selection of keg beers. Unlike many breweries they don’t go in much for rebrandings, radical changes of images, but are stout oaks not bending with modish winds. ‘Occasionally, we may tweak our image but not much,’ Sam avers. ‘We are happy as we are.’


Also by Andrew Liddle...
Theatre In The RowntreeAugust's Beer Of The Month - Rooster’s Craft Beer PerfectionMixed Reaction To Brewing Tax ReformsSwing That Music At Lawrence BatleyThe Fat Cat At Kelham Island. Where History Was Made
So as a beerman, how would he appraise this beer? ‘Leeds Best is a traditional Yorkshire bitter and has a thick creamy head and a full ruby brown body,' he says, unhesitatingly. 'It's brewed using entirely British ingredients: Pale Ale and Crystal malts and First Gold and Golding hops combine with the brewery’s unique yeast and of course Yorkshire water. The resulting beer is full bodied and smooth, with a crisp but not overpowering bitter finish.’

The pint in front of me, I would add, with my reviewer’s hat on, is an aesthetically pleasing dark golden beverage, effulgent beneath an off-white head which ebbs to a nicely-clinging lacing, tastes as good it looks and wafts a caramel sweetness. For an easy-rider (4.3 ABV), it possesses a smooth mouthfeel with multiple subtleties of taste and flavour. You can pick up almond notes in the crystal malt and there’s a light floral citrous in the hops which impart a nice clean refreshingly unsweetened aftertaste. It’s very much a hoppy beer. First Gold - England's first hedgerow hop - and Goldings are quintessentially English hops.

According to the bottle it is brewed with ‘a unique strain of Yorkshire yeast’. The reference to the county does actually confirm to the mind that this is, as its subtitle suggests and Sam confirms, a Yorkshire beer, a throwback to a golden age of bitters. It’s almost impossible to define what I mean here but I think the experienced beer drinker of a certain age will readily understand. This beer could be an infusion of so many traditional bitters once brewed in these parts. I might almost refine it further as a West Riding taste, putting me in mind perhaps of Tetley’s when it was Tetley’s, diffused with many choice half-forgotten others.

Sam is a beerman after my own heart. ‘A well-kept pint of cask ale in a great pub is the pinnacle of the drinking experience,’ he says. I raise my glass to that in total agreement and am hugely pleased to hear him tell me The Adelphi, in Leeds, is his local. In the late 1960s it was my regular Friday night haunt. The music from the legendary Ed O’Donnell Jazz Band was simply wonderful to hear, echoing down Briggate. I always found myself running upstairs and experiencing the most joyous flooding of the senses as I was hit by a hot fug of fags, beer fumes and music from the Delta, blissfully loud and stomping. No flower power junkhead of the time ever got a buzz like that. I digress.

Sam intends to be at The Adelphi a minute before opening time on the 4th of July. I think I’ll be there with him in spirit supping a pint of our beer of the month, maybe even hearing the echo of New Orleans’ Jazz.