Beer Of The Week: Are You Going To Scarborough Fair?

This week’s beer of the week is an outstanding IPA which, at 6 percent, is a strong one.

Brewed with a pale Wold-grown malt base, Scarborough Fair is a triple-hop blend with no hint of parsley, sage, rosemary or thyme but a fine crisp peachy bitterness, wonderful on the palate and certainly packing a punch. 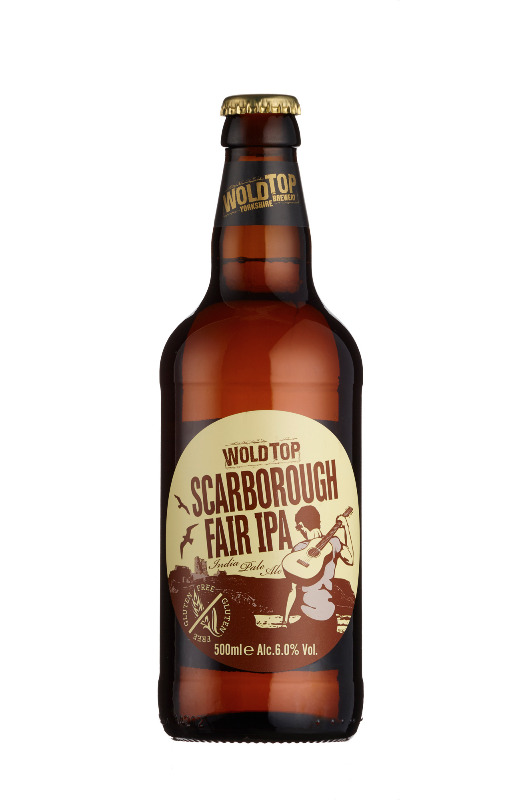 According to the bottle the beer contains maize for foam retention, and it is probably this which imparts a transparent golden colour and initially a generous creamy white head which subsides and lingers thinly. It is gluten-free, lightly carbonated. Its redolence is far more subtle than many IPAs and the taste is distinctive, both fruity and spicy, hoppy and subtly malty. In a word, it’s a really lovely drink and it certainly gives you a feel good glow.

Wold Top Brewery, near Driffield, was founded as recently as 2003. The Mellor family has occupied Hunmanby Grange Farm since 1945, farming the 600 arable acres high on the Yorkshire Wolds. Tom and Gill, however, are the first to put to brewing purposes the home-grown barley and exceptional water from the farm's own borehole organically filtered by the chalk of the Yorkshire Wolds. Using traditional methods and recipes, they quickly established a high reputation as brewers of fine real ales with a distinctive flavour.

In actual fact, they are carrying on an association going back before the Great War, to when the Mellors were publicans in an eighteenth-century coaching Triangle Inn in the Calder Valley village of Triangle. At the end of the Second World War, the family bought the farm and swapped the Pennines for the Wolds.

During their relatively short brewing history their range of Yorkshire-inspired cask, keg and bottled beers that includes Wold Top Bitter, the first and flagship beer, Wold Gold, Headland Red and a range of splendid gluten-free beers including Against the Grain, Marmalade Porter and Scarborough Fair, have won several prestigious brewing award and legions of fans. They put much of this success down to their farming methods, maintaining that the greener the crop, the better the ale. For this reason all their crops have six-feet margins to promote wildlife biodiversity and they set aside 35 acres of species-rich chalk grassland as home to varied flora and fauna.


Also by Andrew Liddle...
Doors Opening For The Georgian Theatre RoyalAnd Then There Were TwoMeet Magic Rock's Christa SandquistSunak Is A Bit Of A DragRadio Gaga
One recent event of note is that they have begun an association with sister company, Hunmanby-based Spirit of Yorkshire Distillery, the makers of Filey Bay single malt whisky. Using casks that once held maturing spirit whisky, they are now producing the well-named Swell, Yorkshire’s first barrel-aged beer. A very special limited edition dark beer, it has matured for eleven months, to pick up seasonings from the spirit as well the woody flavours from the cask itself.

Rich and fruity with an ABV of 12%, Swell is not a beer to be taken lightly but to be savoured. Limited to 6,000 330ml bottles, it is available online and from independent local retailers whilst stocks last.

Swell is, apparently, the first of an Ebb and Flow series of barrel-aged beers. Future releases will explore different styles of beer, matured in different whisky cask types from the Spirit of Yorkshire Distillery.

Scarborough Fair, an uncommonly good English IPA, and other products from Wold Top may be ordered on-line at woldtopbrewery.co.uk