Beer Of The Week: Selby Blonde From Jolly Sailor

Our beer of the week is the outstanding Selby Blonde, which advertises itself as ‘a floral, light and refreshing English blonde ale – suitable for vegetarians and vegans’.

Jolly Sailor Brewery is Selby’s own and might have been called after the town had not another one of that name then existed. That was back in 2012 when Dave Welsh founded the small micro-plant in the back garden of the Jolly Sailor in Cawood, a pub he still owns but leases out. 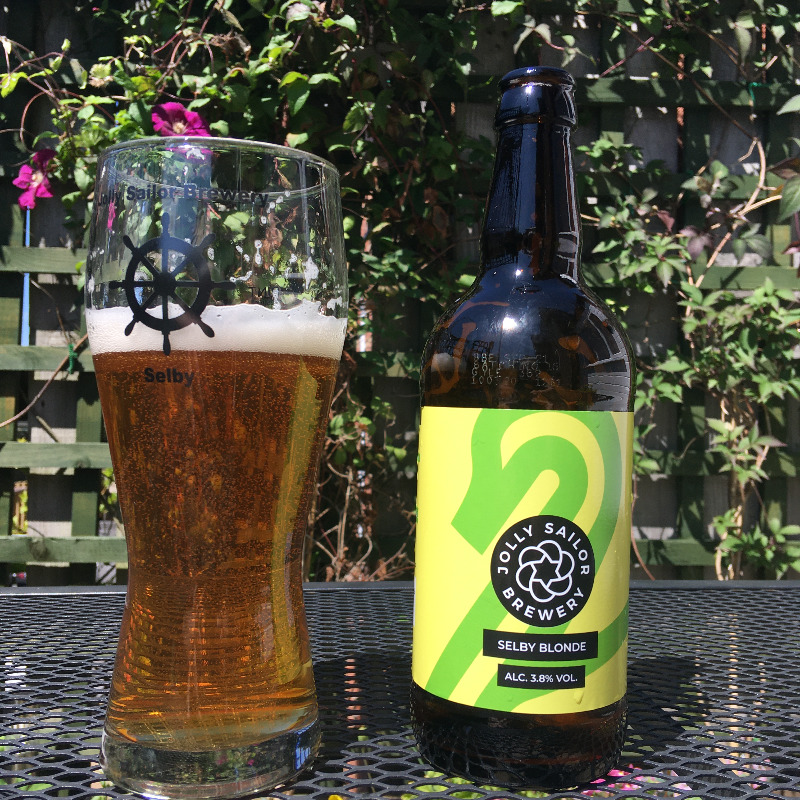 I find him hard at work, brewing for the first time in three years, having had regrettably to furlough his two brewers, James Mason and Steve Hullah, during the pandemic. Clean shaven, a rarity among the bearded breed of brewers, he is obviously not without the hair gene possessing more of the follicular stuff on top that most men in their late fifties.

‘Running both the Jolly Sailor and the brewhouse posed too many difficulties,’ he explains, ‘and I felt the odds were stacked against me.’ He relocated first to an industrial unit before buying the Olympia Hotel, an imposing 1930s’ brick building with some half-timbering, well sited on the A19 York road. It was originally there to supply the workers from the local Olympia Mill as the signboard acknowledges in an image of large millwheels. The former boxing club behind the pub has been converted into a six-barrel plant and a shop.

Run off his feet as he is, he’s happy to pass me to Gemma Bishop, his vivacious, ever-smiling step-daughter and business manager. She takes me first on a tour of the plant, to inspect the pine-clad steel utensils and conditioning tanks resplendent in their silver insulating jackets, where David is studiously checking the various levels. I ask her if there are any remaining traces of the boxing club and she humours me by taking me behind the scenes to see graffiti related to the noble sporting art. Then we sit in her office upstairs and, as she pours me a bottle of the blonde, chilled in anticipation, she tells me about the brewery.


Also by Andrew Liddle...
Georgian Theatre Royal Gets Grant To Boost EnvironmentChick Corea, Colossus Of The Jazz KeyboardMagic Rock Zooms In With A New AleTop Of The Hops: Magic Rock’s Eight HaulA Dumb Blond In Charge Or A Malign Force?
My attention is first drawn to the reverse of the bottle where I find ‘The Vision of St Germain’, three closely printed paragraphs relating the story of Benedict, a French monk, compelled by the saint to found a monastery in ‘Selebaie’. He would know it by the presence of three swans.

2019 was a particularly busy year for the brewery being the 950th anniversary of the town. ‘To mark the occasion, we rebranded and issued special ales,’ Gemma explains. ‘We adopted a swan motif on our bottles and pump clips in honour of the local coat of arms. Till then we had been quite retro and had a jolly pin-up girl.’ She laughs again. ‘We thought we should move with the times.’

Normally they have six core ales, including popular favourites, Selby Bitter (3.8 ABV), the sweetly delicious Selby Mild (4.0%) and the Selby Pale (3.9%). ‘You’ll find our beer all over Yorkshire and we’ve extended into Nottingham and Lincoln.’ They are also well represented at beer festivals in the north.

Our beer of the week, Selby Blonde, stands comparison with any of the genre. Let the brewer’s website speak for itself of this ‘refreshing, light and floral extra pale ale. Harnessing the citrusy characteristics of Nugget hops for bittering, then complimenting it with Savinjski Goldings aroma hops, this beer is perfect for ale and lager drinkers alike!’

Nothing to dispute there. This is a hugely desirable blonde with a nice blend of citrous fruitiness and delicate malty sweetness cut by a clean, lager-like crispness. It satisfies, cleans the palate and engages your interest. I have already developed a taste for it!