Best In Britain: Prestigious Award For Apprentice At Yorkshire Housebuilder 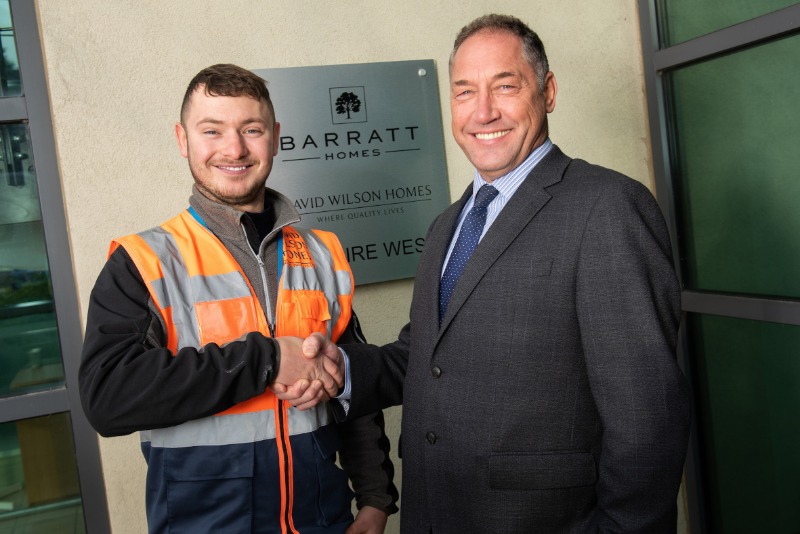 Wesley Betts with Darren Johnson
Yorkshire-based apprentice Wesley Betts, from Barratt Developments Yorkshire West, has been crowned Regional and National Apprentice of the Year at the housebuilder’s annual awards.

Wesley, 26 from Pontefract, was nominated for the Regional Apprentice of the Year award by Gary Taylor, Apprentice Ambassdor after demonstrating his outstanding work ethic at the housebuilder’s Chapel Lea development, in Wetherby. He saw off fierce competition from other apprentices for the regional award, before being awarded both regional and national titles at the Barratt Development PLC Awards at The Belfry in Birmingham.

Wesley joined the team as a labourer when he was 17 and joined Barratt’s trade apprentice programme two years ago, where he has completed his NVQ Level 2 and is now studying the advanced bricklaying course at Leeds College of Building. Wesley was attracted to Barratt’s programme due to the opportunities to study and work simultaneously.

Wesley said on the win: “I’m still a little overwhelmed. To win one award is fantastic but to take home both the regional and national titles is really rewarding! I’m determined to be the best I can in my career and am lucky to have a brilliant team supporting me and helping me to develop. I’d recommend Barratt’s apprentice program to anyone looking to get into the construction industry.”

Darren Johnson, Construction Director at Barratt Developments Yorkshire West commented: “We are very proud of Wesley and over the moon that he has walked away with both the national and regional titles. He has worked incredibly hard and he thoroughly deserves these accolades. He has set a great example to the other apprentices and has shown that hard work really does pay off!”