Bombs & Bananas: The Last Dinosaur In Doncaster By Sarah Wimbush 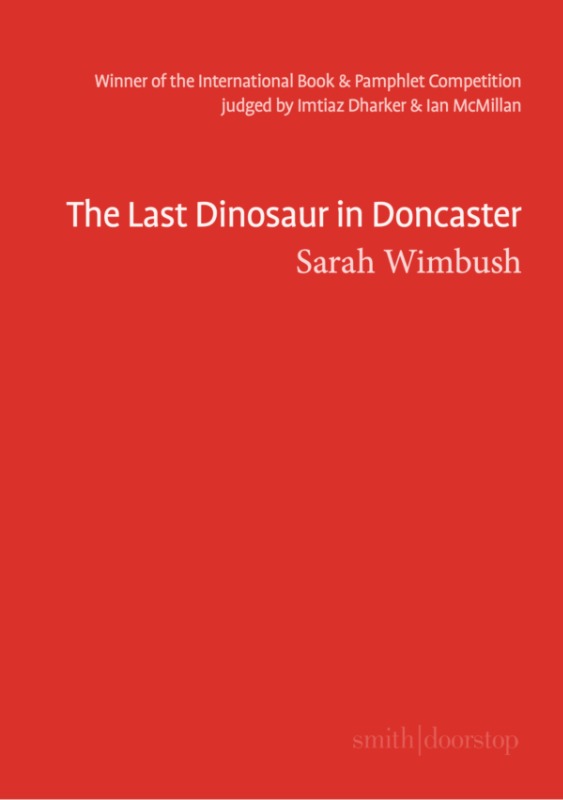 It is a rare and cherishable thing to find a poet whose absorption in the hinterland of her own past is so complete that her rendering of an earlier life is unclouded by ambiguity of vision. The reader of Sarah Wimbush’s award-winning collection of poems is privileged to scrutinize an era of tectonic social change through the microscope of local detail, to feel the reverberations of cultural nuance in the textures of the landscape and the voices of its inhabitants, whose dialogic interjections breathe life into a sclerotic post-industrial heartland.

Wimbush is a very skilled practitioner: the simplicity of her language filters, rather than betrays, the elegiac impulse on which her poems thrive. Her style is unique - a studied detachment enables the dissection of social and domestic conditions in the South Yorkshire of her youth entirely without sentiment, and with an easy insinuation of good humour. Not that you can detect a prominent formal seam - Wimbush’s depiction of retrospective reality relies as much on the power of intensely focused memory as on its conduit.

Nor are we hamstrung by the critical enigma of authorial intention: Sarah Wimbush’s descriptions look to be as near autobiographical as is demanded by the overarching tone of the poems; a direct form of address is punctuated on every page by the kind of contextual detail that locates us in the early eighties of the Miners’ Strike and urban dereliction. The people too – often identified by name, neighbours, associates and denizens of Doncaster’s wider terrain - bring a collective authenticity to an affecting tableau.

Not least in the person of Sylvia Grant-Dalton, the last incumbent of the subsiding, ‘losing battle’ of Brodsworth Hall, whose crumbling façade is a metaphor for the decline of an industrial ‘aristocracy’ of mine and mill owners, and before them, plantation proprietors and slavers. In ‘Near Extinction’, Ms. Grant-Dalton plasters over the scabby cracks as the juxtaposed miners and miners’ wives hold back the onrushing tide of McGregor’s Praetorian Guard as best they can, with tea and sandwiches, emollients to the ‘burned-out’ heart of Mr Selby, who sits ‘in his chair, waiting / for the snowdrops.’

Spring, of course, will never arrive. Wimbush’s drawing of decline is corrosive and concise; time’s process of deconstruction – ‘subsidence / scribbled on the wall – / the roof a drain, gardens besieged’ – erodes architecture as efficiently as the undermining of trust in those for whom metaphors must be secondary to food on the plate. Because you should not be fooled into thinking that Sarah Wimbush’s approach, though in some ways distanced, is anything less than committed to the interests of the many who make up the dramatis personae of this rather beautiful collection.

The moving ‘decline’ of Mr Selby, the optimist Brian, and the productive Lesley Boulton, ‘a pin-up girl at Highfields Welfare’, are archetypes of the teeming many who make the narrative of The Last Dinosaur in Doncaster thrive as an act of general commemoration. ‘Rosso’ Youthy 1984’ does for a soon-to-be-extinct culture what Tony Harrison’s Eloquence sonnets did for the working class voiceless, and in a precise interchange which yields a sense of confraternity in local demotic. The Harrison comparison is deliberate: the fragmented formulation of her poem breaks thirteen lines into distinct couplets and an italicized interjection, which together build a resounding portrait of a lost time through utterly convincing ‘period’ observation, and the capturing of a time’s moment in the measuring of a cig’s journey to ashy extinction:

‘The amber of a cigarette, a finger held aloft
passed around like a syringe full of shit
drawn into a tail of drooping ash.’

Wimbush’s opening line - ‘Talk’s all pit-head gates’ – is pure Harrison, from the instinctive elision to the introduction of theme. And even where the echo fades, we find a verisimilitude of language use, an easeful drop into a vernacular with which she identifies, whether this be in the forcing shed of regret amongst enervating reality – ‘How they’d gu back tomorra’ (‘Markham Main’), or in the drumbeat block of a prose/poem which finds affiliation in vocation, in consanguinity and in a resolute sense of ‘Them & [Uz]’. The language of ‘Our Language’ is shaped by a folk memory which is rough-hewn and fundamentally unknowable outside of the Pit’s cognoscenti. And it hammers home the desperate meaning of Heimat with unrestrained consonantal vigour:

‘This is the language of the pony riders and jumped-up check-
weighmen, of Davy lamps and Dudleys, the oncostlads and
gaffers, of black nails and snap tins’. 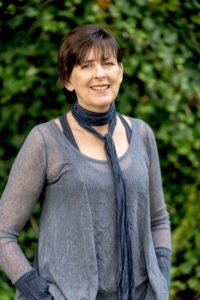 Sarah Wimbush
Wimbush’s extraordinarily focused memory enables the making of metonymic suggestion from the fine detail: in a moment of sublime precision, the Bildungsroman of ‘The Pencil Sharpener’, draws an affecting series of images of a father using a desk-bound machine with the delicacy of a lathe-turner. An embodiment of pure artisanal skill, he is no less a figure for natural creativity than Heaney’s father in ‘Digging’; and similarly, his powers will clear the ground for his daughter, the writer:

‘above the whiteness he’d excite the air
with tiny circles. I imagined words
like: daughter, sharpen, write.’

An identification of the making of words with the idea of work, and especially with the work of remembrance, gets close to the heart of the mandate. This is mettled poetry, reinforced with a resilient carapace, robust and defensive of a culture and a place to which the poet owes a debt of gratitude. The irony of displacement – the ghostly figures supping ale in the ‘early doors’ boozer now look out over a Chinese (‘The York, Edlington’) – is reified by Wimbush’s instinctive directness. And the armour is not seriously weakened by the presence of irony: a clatter through the humdrum domestic drama of ‘Bombs and Bananas’ – the comic inversion of a mobile in a Skype conversation, a room squinted at upside-down, a mug floating across a screen in the unpracticed hands of an ingenuous elderly technophobe – is not unsettled by counterpoint:

‘How Edlington village raised enough money
for one torpedo during War Weapons Week.
How you ate your first banana, unpeeled.’


Also by Steve Whitaker...
Poem Of The Week: ‘All The Pubs Where We Used To Meet Are Sinking’ By Carole Bromley'These Are The Hands' : Many Different Kinds Of Love By Michael Rosen'Wor Jackie and the People's DreamingPoem Of The Week: 'Going Blind' By Rainer Maria Rilke (1875-1926)Frank Worthington: Football Legend - 1948-2021
A natural, understated form of humour in any case punctuates Wimbush’s collection, and well wrought though its presence may be, it looks effortlessly sardonic against a backdrop of regional decline. Comedy leavens the bread of change, removes the sting of enforced deracination with a shrug, and reminds the reader of a childhood impervious to doings outside of its own immediate realm. Delivered with deadpan directness, we find wit in the working class habit of makeshift utility: the tip yields a washing machine door which will double nicely as first a ‘goldfish bowl,/ then a trifle dish’, and a contraption erected by her father on the conservatory roof, which was ‘set at an angle to the other planet’…

‘and if we turned the spanner in the tank cupboard
the water was glorious for at least two minutes.’ (‘Giant Leaping’)

And a little later in time, a battered Capri (‘her big end fell off’) denotes another stage in the learning process, in a masking-taped world cheerfully unconstrained by H & S and risk assessments:

‘five gears, two doors, four seats; ruptured exhaust gaskets
so them in the back suffered headaches
and breathing difficulties.’ (‘I learned to drive in a metallic blue Ford Capri’)

Which seems to be the point: Sarah Wimbush’s refreshing take on a ruptured, but ineffably colourful, past bursts through conventional borders of definition to celebration, and is never derailed by the bittersweet, ‘kumquat’ irony of co-existent pain. Her documenting of memory dignifies the struggle with inventories of tangible detail, fixes in perpetuity the vision of a landscape at a time of cataclysmic change. Her observational powers are astonishingly acute, a sensual assault, leaving us breathless at the accumulative and repetitive weight of an imagery whose presence bespeaks a photographically authentic sense of a former life. Many of her readers will identify with this poet’s rendering of Doncaster and its environs, the tokens of which resonate across the North: the former Hillard’s supermarket chain; the semi-lethal tin openers ‘cutting sheet metal in one breath’; the ‘lager and black’ and Lambert and Butler quaffed and inhaled in the square-mile clotting of pubs – ‘Gooin’ round Donny town Satdy?’ – all vouchsafed in ‘Our Language’ and the commonality of lived experience.

And at the back of everything, the sense of something profoundly significant behind the quotidian façade – the details of a life, and the embodiment, perhaps, of a poetics:

the witchcraft circle beneath Edwardian Lady wallpaper
in the box room, door bolted

from outside.
Geese as they fly south. (‘It’s the backs of things’)

The Last Dinosaur in Doncaster is a winner of the International Book & Pamphlet Competition, judged by Imtiaz Dharker and Ian McMillan, and is published by smith|doorstop.