Terry Geo
This story is incredible…isn’t that what Science-fiction books are meant to be? Or maybe the best retain some credibility even if the imagination is stretched just a fraction.

The first few chapters of this book are indeed credible – there has been enough written about the power of dreams to at least make you wonder about the possibility of harvesting our nocturnal visions, and of the existence of a company like Silicate.

An incongruous group of people are gathered together, in plausible fashion, and find themselves part of a technological drama which could result in the end of the human race. The story builds and the secrets of Silicate are slowly revealed. Problems are hinted at but its nemesis only comes to light in the latter half of the book, in time for a brief, exhilarating showdown. The reader must suspend disbelief to engage with the narrative but it is of the sci-fi genre and, as I said, that is to be expected. The character of Jake says at one point - ‘I still can’t get my head round it’, and as a reader, it is almost better not to try. 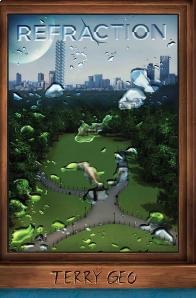 The story does career into the realm of Star Trek (I always remember Kirk’s hologram holiday), Star Wars and all manner of childhood fantasy (read it to see what I mean). The world of ‘Edutainment’ is created with vivid imagination and pure delight and ‘The Museum’ gives new meaning to extreme theme parks (even wilder than Jurassic) where experiences are varied, ‘real’ and supposed to be safe. Personally, having apparitions interacting with real characters was, at first glance, a step too far but it soon became clear that it was a necessary plot device.

I have to say that a flying white dragon and a Nimbus 2000 being the chosen modes of transport for the heroes in hot pursuit of a manic villain towards the end, did make me laugh and relieved the tension which had been sustained for several chapters. Whether or not you view the ending as a triumph is for you to decide – no spoilers here.

We are told that the author, Terry Geo, felt the loss of his cat, Megara, deeply and wrote her into the novel as a memorial to her. She is treated with sensitivity and it is clear this writer knows his animals – just a little added extra which enhances the book still further.


Also by Artis-Ann ...
'You'd Better Get Yourself Off Then, Pet': The Seagull By Ann CleevesThe Bonds That Define Us: And The Mountains Echoed By Khaled HosseiniReview: Beast By Chris SpeckOf Mice And Men By John SteinbeckReview: The Girl From The Hermitage By Molly Gartland
The rest of the characters are believable and interact well, although at times, it is hard to remember which is the child and which the adult in Isabel and Abby, especially in the museum and in the final action. The stereotypical northern farmer mellows as does the geeky schoolboy, when they find themselves in more comfortable surroundings, with people who accept them for what they are. The relationship between Jake and Padman is a little overplayed. I am neither prude nor homophobe but all that kissing ‘on the lips’ (and at some most inopportune moments) was cringeworthy - as it would have been between a heterosexual, or indeed any other, couple. Save it for the end – less is more!

I spotted a few typographical errors missed by the editor, but it feels almost churlish to comment on them. They didn’t spoil my enjoyment and maybe I am something of a pedant – yes, I said pedant!

Although perhaps not of the calibre of Wyndham, Asimov or Bradbury, this is a great read for Sci-fi enthusiasts and I hope the response of religious activists to Isobel’s new book, publicised in the epilogue, is not echoed here. It’s a story…I think.


Refraction is available in Kindle and paperback formats