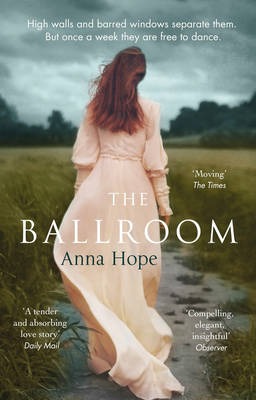 The imposing Menston Asylum, better known to me as High Royds, (and in the novel as Sharston Asylum), was previously a psychiatric hospital and prior to that, a dreadful prison where people who somehow didn’t ‘fit in’ with society’s expectations were incarcerated. It has now gone the way of so many old buildings (magnificent and dominating as it was) and is a new housing development, half a mile from where I lived for twelve years, on the edge of the Yorkshire Moors.

Once again, to my delight, this skilfully written novel blurs historical detail with fiction, although the author explains she has a personal connection with the main character, John, who is based on her great-great grandfather. Her description of the identification of the ‘mentally ill’, their incarceration and their treatment at that time, serves to remind us how lucky we are today, when mental health and well-being is treated with so much more compassion and understanding. At the time of this novel’s setting, there were those who thought that ‘these people’ were lucky to be housed, clothed and fed at all and that ultimately, they should be grateful... if only they had their senses.

Set in the early twentieth century, Eugenics was the talk of the day: the sterilisation of the ‘under-class’ of society so that they could be ‘bred out’- a (very) slightly more subtle version of Hitler’s desire for a Master Race some twenty years later. It is fortunate that a Eugenics bill was never passed by Parliament, despite the support of Winston Churchill, then Home Secretary, but following the less extreme Mental Health Deficiency Act of 1913, which ruled out enforced sterilisation, asylums like Menston instituted a policy of segregation: men in one wing, women in another, to avoid any possibility of breeding! 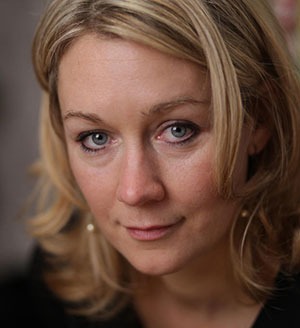 Anna Hope
The opening of The Ballroom leads us into a story which continues in flashback, coming full circle only at the end. The action of Book One is arresting (pun intended) from the start. The harsh treatment of inmates by cruel warders, termed ‘nurses’, is not concealed – there is no sugar to help this bitter pill go down. The violence inflicted on others, and that which is self-inflicted, are woven together throughout the novel and yet, The Ballroom is more a sensitive romance: the story of Ella, held at the Sharston Asylum. Her supposed exhibition of ‘madness’ was the breaking of a window in the textile factory where she worked, so that she could see the sky. Meanwhile, in the men’s wing sits John Mulligan, an Irishman suffering from depression brought on by the death of his baby daughter, and ensuing divorce from the wife who (seemingly illogically) blamed him. Grief may manifest itself in many ways. Once a week, John and Ella are brought together by the Friday night dance, arranged by one of the doctors, and romance between the two blossoms. The doctor’s own tormented existence forms a sub plot where as much is implied as stated.

The harsh reality of life for these poor unfortunates is set against the raw beauty of ‘God’s own county’ – the wild moors of Yorkshire - and Hope’s descriptions do good service to nature – as Hardy does for Wessex. There are hints of Marjorie Darke - I think particularly of her novel A Question of Courage - in the depiction of force feeding, but in truth, this book stands alone, beautifully crafted writing about a time of raw emotion. Thank you, Janet, for lending me a copy.


The Ballroom is published by Transworld.


Also by Artis-Ann ...
‘You Need All The Luck You Can Get’: A North Sea Tale By Chris SpeckIn The Eye Of The Storm: A Cotswold Ordeal By Rebecca Tope'Women Are From Venus': Joanna Trollope And Helen Fielding‘Hindsight Is A Wonderful Science': Artistic Licence By Katie Fforde'Science Turns Paradise Sour': The Nuclear Imagination