British Medics To Tackle Measles Outbreak In Samoa Over Christmas 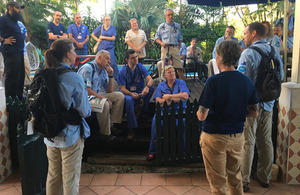 The UK government has confirmed today (9 December) that a second UK aid-funded Emergency Medical Team (UK EMT) of 14 British medics will be deployed to Samoa to tackle a deadly measles outbreak over Christmas.

A first team flew out from the UK on 29 November and is working for two weeks in Samoa to help people suffering from the virus. The UK government has now committed to extend its support.

The second UK team will replace the current team of 14 British medics and is expected to arrive on 15 December. They will be working 12 hour shifts over Christmas to treat critically ill children in Samoa’s national hospital in Apia.

120 patients are currently receiving treatment in Samoa’s national hospital for measles. Over 90% of those who have died since the outbreak began have been children under three. The UK team has been treating and resuscitating children with measles to prevent further loss of life.


Measles is a highly contagious virus that can spread to others through coughing and sneezing.

Measles is a highly contagious virus that can spread to others through coughing and sneezing. Each case can infect many other people and complications can lead to pneumonia, severe diarrhoea and encephalitis or inflammation of the brain.

"I want to thank those British medics in the South Pacific for their dedication, especially at this time of year, for working so hard to tackle this deadly outbreak and treat those who are infected.

"The next wave of medics will ensure that patients will continue to be seen over the Christmas period, and that the UK will play our part in stopping more families losing loved ones to this deadly disease."

"The medical system here is under the most enormous amount of strain, with the hospital operating far, far beyond its usual capacity. The local staff have been working around the clock for weeks and weeks on end, many of them without proper breaks or any days off. Some of them are absolutely on their knees.

"We’ve seen some cases of very, very sick children. Children are dying from the complications of measles."

"Almost all of the patients are children under the age of five.

"It’s great to see this NHS team just click into place here with real professionalism. We will treat as many patients as possible and hopefully save lives."

"UK-Med and our partners Humanity & Inclusion are glad to have prepared a second team of healthcare professionals to help treat children affected by the measles outbreak in Samoa with funding from UK aid. We’d like to thank our hugely dedicated team members, who have been working around the clock alongside AUSMAT and Samoan colleagues, for their dedication and professionalism.

"Thank you to our committed second wave team members for supporting this vital response to help save lives and alleviate suffering of those affected."