Broady Thrashes Willis In Shock Second Round In Sheffield 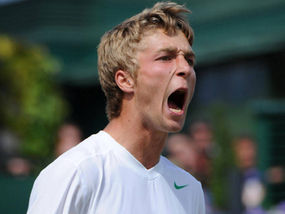 Liam Broady roared through his second round match against Marcus Willis.
The seeded players continued to fall on the second day of the ITF Futures event in Sheffield this afternoon, as only three of the eight seeded players made it to the last eight of the competition.

The latest to fall was fourth seed Marcus Willis, who had been showing some impressive form of late, but was annihilated by an on-song Liam Broady to take their head-to-head record level at 2 matches apiece.

The pair had played each other twice over the last month, with Willis emerging triumphant both times, but today was a different matter as Broady strolled to an emphatic 6-1 6-1 victory to seal his place in the quarter-finals.

Willis struggled on his service game in particular, serving an uncharacteristic 9 double faults throughout the match, while Broady capitalised with his strong returning game, all the while remaining solid on serve: one ace, no double faults, and only three break points conceded - all of which were saved.

Broady has shown signs of improvement of the past few weeks but this is the first time he has really demonstrated his ability to outplay some of his close British rivals. And clearly, having won the Junior Doubles at the 2012 Australian Open with partner Joshua Ward-Hibbert, he enjoys playing on the hard courts.

Broady will go on to play Myles Orton, who defeated eigth seed Lewis Burton yesterday and continued his decent run with victory over Alexander Jhun today. In a tense first set, Orton was just able to seal the decisive break of serve in the crucial 3-3 game, and after clinching the first set, it was relatively plain sailing from there.

Meanwhile, the only all-seeded quarter-final will take place between top seed Dan Cox and sixth seed James Marsalek. Cox was able to claim his third straight victory over Joshua Ward-Hibbert with relative ease, while Marsalek came from a set down to defeat unranked Samm Butler 4-6 6-2 6-1,