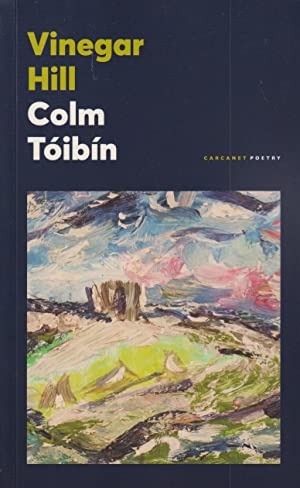 Colm Tóibín is both present and not present at moments of immense significance to the teeming protagonists of his poems. As otherwise invisible as the bronzed figure of Icarus in ‘In Los Angeles’, as seemingly extraneous as the boy who falls into the sea in Auden’s ‘Musée des Beaux Arts’, the novelist contrives an invaluable detachment in his first poetry collection. A shadowy figure pulling the narratorial strings, Tóibín gives agency to a multiplicity of Orlando figures who are behind and in front of events, sometimes diving through the temporal carapace to declare a consonance of narrative and experience, sometimes removing themselves into realms of the imagined.

The narrator’s presence in ‘The Long Trick’ is as protean as the shifting perspective of waves: an observing figure on the Estonia a year before it sank in the Baltic, taking 852 passengers with it, or diving on the Great Barrier Reef a month after two snorkellers were left behind in the ocean by accident. Barely perceptible in the gentle rippling, any sense of cataclysm, of celestial occurrence, is marginalized by the amniotic blandishment of the water into which the mythical boy careened:


‘So there was really nothing to worry about, nothing
To suggest disaster, except the waves themselves,
The swell that is unnatural even at the best of times,
All highs and lows, untrustworthy even when calm,
Just undulating wilfulness, no conscience, no regrets’.

Or amongst the clouds in freeform incognito, the narrator turns invisible by degrees, like the slow inveigling of poison into the body of Socrates. Tóibín’s achingly lyrical rendering of predatory nature in ‘High Up’, dissolves as darkness rises and a cacophonous avian ‘utterance’ becomes Larkin’s birdless silence: ‘Soon, they will be gone. / And the sun’s round mouth will shut tight /Against the dark’.


Tóibín’s ability to turn the cadences of discord into witty irony is well established in his fiction.
The tempering of time and the music of time into a single pliable form is achieved so diligently in this expansive collection that one marvels at Tóibín’s capacity to traduce, or render anew, a novelist’s instinct. The effortless conflation of time and war in ‘Anton Webern in Barcelona’, suggests interior knowledge, an impossible presence, as though the narrator was a party to collective memory in a space where civil war is heralded as troops gather, the players of an orchestra ‘awaiting command’. Resonances inhere to the fabric of the psycho-geographer’s landscape like the leavings of a moth’s wing. The empty rooms of ‘Open House’ invoke earlier presences in a thin inventory presided over by the house’s remaining occupant, and betray the realtor’s pitch that ‘all is change and flow’. Palpable in absentia, existences are underwritten in despite, as though the quotidian Mr Bleaney might be recalled by the evidence of the condoms he never needed; or the shadow of the dead summoned in measured commemorative observation (‘Blue Shutters’).


God’s bisexual promiscuity in ‘Eve’ lends His persona the profligate capriciousness of the Greek pantheon, and is conceived with rich satirical and metaphorical relish lest we were in any doubt as to the homelessness of the Old Testament view.
The poet’s loose manipulation of form is engineered to accommodate a widely-scoped thematic and semantic terrain. With a fiction writer’s instinct for rhythm, Tóibín’s sense of narrative momentum is well served, and without constraint. Not averse to the use of pause, hiatus and metrical reversal to good effect, his poems do not subject the greater work of reception and recognition to formal limitations. This is especially true of the ‘autobiographical’ series of poems which reinforce a sense of displacement by other means. The ghosts of the past are no less palpable in the present than the shadowy figures of the narrator’s own childhood. Sometimes framed in the ingenuous language of the young, these poems insinuate the wider implications of cultural context into their tableaux by innocent stealth. And so it is that the framework of religious observance in Enniscorthy hoves into contradictory view, as esoteric and obscurely ritualistic as the Rosary, and as fathomless as the apparently bottomless reservoir chute into which the young boy would chuck a stone and wait for a distant echo (‘Vinegar Hill’).

Tóibín is rich on Catholicism, especially insofar as observance is tested by the vagaries of an increasingly secular incursion. The inventory of names adorning the pillars of Enniscorthy Cathedral in ‘Bishops’ is as suggestive, and oddly enduring, as myth. As the clergy’s names descend down the walls, the church continues to yield the illusion of perpetual ascent, as certain as the rising sun:

For much of its history
Even as Latin moved
To English

And each bishop
On the scroll made way
For the next one.’

Tóibín’s ability to turn the cadences of discord into witty irony is well established in his fiction. The gentle observation of an unusual circumstance that occurred in Wexford in 1963 – the day of the philandering US president’s visit coincided, more or less, with the death of a pious local bishop – evolves into an imagined scenario of the latter poleaxed by anxiety, now caught in limbo, ‘His episcopal soul in suspension, like Schrödinger’s cat’. The innocent anticipation of the eight-year-old Tóibín on Kennedy’s visit, in a sense, heralds the dawning of a new kind of world, and it is characteristic of the poet’s sense of fun, here and elsewhere in this wonderful collection, that the iron-slow erosion of Catholicism’s Irish hold should be measured in the terms of a gleaming new culture from over the water:

‘I believe that if people had been asked to choose between
A dead bishop and a live President, they would have opted for

The latter. I was only eight, but I too would have cheered
For Kennedy. I had been taken out of school and liked
Excitement. We stood on the quays and waited for his car
And went home with news of his suntan and his teeth.’ (‘Kennedy in Wexford’)

That meeting of cultures, celebrated in the droll and wickedly understated tercets of ‘Vatican II’, could not better be described than in the image of newly motorized nuns hitting the road and ‘Putting the fear of God’ into other road-users. Or in a prayer for a ‘cure’ for the saccharine ornamentation of ‘metaphor’ (‘A Prayer to St Agnes’). The clarity that animates Tóibín’s poetry – his exposition is relatively uncomplicated, his syntax clean, and his lineation often foreshortened – imputes a paradoxical truth to the demand for the ‘unsweetened bliss’ of the simple approach, in spite of the prayer’s disingenuous suggestion. God’s bisexual promiscuity in ‘Eve’ lends His persona the profligate capriciousness of the Greek pantheon, and is conceived with rich satirical and metaphorical relish lest we were in any doubt as to the homelessness of the Old Testament view.


...or weave the frightening spectre of grim possibility into the dawning realisation of a Trump presidency : ‘It is sobering / To remember we were not laughing anymore’
Assuredly on point, whether in relation to the changing terrain of homosexuality, or the church, or the anxiety of inherited illness, Tóibín is adept at construing a bigger socio-cultural picture from the detail. In ‘Dublin: Saturday, 23rd May, 2015’, an odyssey through the ‘thicket’ of the proscribed gay underworld of the city during a long period of transition, his narrator is also the outsider who fears his own shadow, the thing we all run from. Fleeing from the Special Branch for no reason, a chase without evident pretext, he describes the purpose of his flight in terms of a general apprehension: ‘Because within all of us hides a latent guilt / That waits to be woken by Branchmen real or false (‘I Ran Away’).

A sense of striving obtains as the poet climbs out of the canvas and into the terrain of earlier experiences, earlier mappings of the past. His sense of Dublin is rifled through with a synaesthesia of tonal nuance, as though the simple music of a tercet might evolve into a symphony, the better to illuminate a city’s compound cultural eclecticism (‘Two or Three’). The received effect is deeply satisfying and disquieting in the same breath. The stripped-down, profound lyricism of ‘Emily Kngwarreye in Dublin’ condenses a feeling of moment in its opposite, describing a city and country whose vagaries resolutely refuse to measure up to the teleology of anticipation. A poem whose observation is as enigmatically distilled as an Eavan Boland moment, is ironised into a celebration by the beauty of its own imagery: ‘Briars and brambles, / Windfall-sweetened / Soil’. And even where the thrust of the poet’s mandate is reflective, conversational, he never drifts into the merely prosaic. The series of American poems here digest frightening new political agendas, alight upon unusually telling examples of otherwise unnoticed protocol observances, or weave the frightening spectre of grim possibility into the dawning realisation of a Trump presidency : ‘It is sobering / To remember we were not laughing anymore’ (‘November in America’).

But Tóibín is at his best when his wide-ranging and erudite poems on art, on culture and on family coexist on a moving platform of suggestion, where time slippages oblige the memory of the living into the coffins of the dead and the nailed down lids barely contain the pain of grief (‘In Memoriam’); or the tempering of longevity by an accident of genetic inheritance circumscribes reflection into inevitability:


‘I have their two weak hearts in one
Weak heart, their eyes merged in my gaze.
His slow smile, her soft side-glance
Oversee my days’. (‘Two Plus One’)

And somewhere between ‘The Torturer’s Art’ - an exquisite drama of intertwined pain and duty, of cruelty and observance – and the earnest effort of extruding words into being in the manner of Hopkins (‘Life’), lies the harrowing truth of severed human connection and words left unspoken:


‘From then I did not put my trust
In anything much. When I summon up the names
Of ones I love, for example, I recoil
At having to whisper what has remained unsaid’. (‘December’)
Vinegar Hill is a moving, learned and profoundly wise collection.

Vinegar Hill is published by Carcanet.

More information here
Also by Steve Whitaker...
Poem Of The Week:Owdham Footbo' By Ammon Wrigley (1861-1946)Poem Of The Week: The Wireless By Jean StevensBurned By Light: Dovetailing - Gathered NotesNight Swimming:Towards A General Theory Of Love By Clare ShawPoem of the Week: 'Together' By Robert Gibson