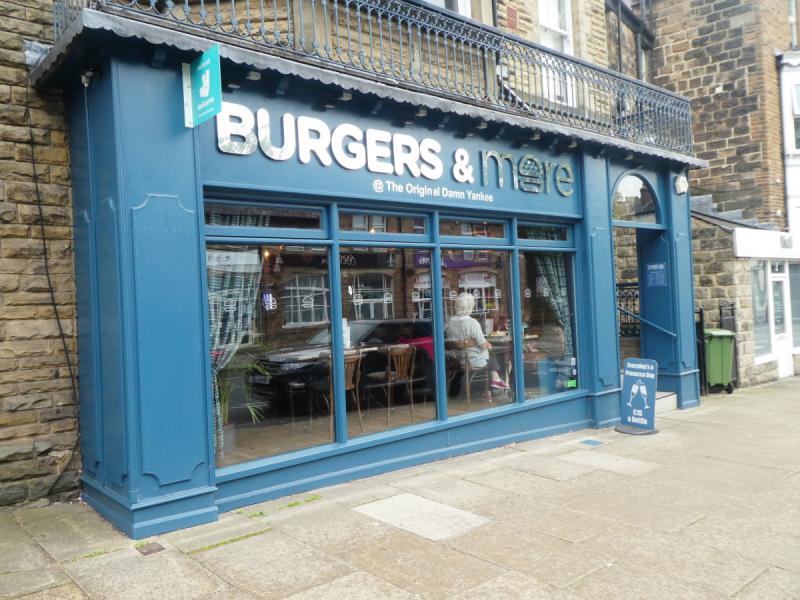 Harrogate has had its fair share of Burger restaurants over the years and thre have been some casualties too - Byron's only lasted in the town less than a year.

Burgers and More is independently owned. The first thing that struck me was the passion all the staff seem to have about the food they serve. It is a friendly place and they genuinely seem to care about their customers, which probably explains why they havre a regular clientele. If you have not visited I would urge you to give it a go.

The restaurant has only been in its current position since March. From the outside it looks slightly dour. I would have thought a brighter signage might have caught more people's eyes, but then this is Harrogate, we can't have a brash sign disturbing anyone.


Also by Graham Clark...
Bolton Abbey Estate Re-opensJamie Lawson Returns - You Might Not Have Been Expecting ThatMake It Your Quest To Discover Quest Apart Hotel, LiverpoolAlexandra Burke Releases NHS Charities Together VideoBoyzlife Are Coming To Hull
The burgers range from the "Classics" to their own creations with over 17 variations such as the Elvis Mark 2, which if you feel hungry consists of a beef burger topped with cheddar, crispy bacon strips, deep fried pankoed banana with a slice of peanut butter ice cream. Apparently this type of burger was a favourite of Elvis. Perhaps after this you will be all shook up or love it tenderly!

As the restaurant is on the site of the former Damn Yankee, a much loved Harrogate institution, there is also a burger dedicated to their legacy called Yankee be damned!

The "more" bit in their title means you can also try a 12" pizza with 8 varieties and 3 vegan options.

We started off with a shared starter of Cheesy Garlic Pizza. It is a meal in itself so be warned. Priced at £5.95 it was definitely cheesy and very greasy, but enjoyable.


Ultimate cheeseburger
Ian the friendly and knowledgeable owner told me that they served 2,000 Ultimate Cheeseburgers in the first few days when they opened in March. I can see why it is their most popular burger. You can have any burger served on a plain or brioche bun.

A very beefy burger topped with cheddar and Yorkshire squeaky cheese, pork burger topped with Mozarella and Katsu coated Camembert with a slide of Stilton and mixed cheese sauce served with your choice of fries and a salad garnish. Priced at £13.95 it did not disappoint. With more cheese than a Wensleydale creamy it was a cheese lovers delight.


Classic burger
My sister went for the classic burger priced at £11.95, topped with bacon and melted cheddar cheese. "This is a proper burger" she remarked.

You probably will not have room for a pudding as the burgers are so huge and filling. As well as such temptations as Cherry Choc Brownie cake and a Knickerbockerglory for adults only called the Hickerbockerglory there are 4 ice cream sundaes.


Roly Poly Sundae
The Roly Poly Sundae came with custard ice cream, warm Swiss roll with strawberry sauce. Sweet and satisfying which makes you think to hell with the diet!

If you want a warm friendly Yorkshire welcome with good tasty food you have found the right place.