A group hoping to reopen a disused West Yorkshire railway tunnel for walking and cycling has welcomed provisions to safeguard the Victorian structure.

Queensbury Tunnel, linking Bradford to Calderdale, has been at the centre of a long-standing dispute between Highways England, who intend to partially infill it due to perceived safety concerns, and sustainable transport campaigners who believe the tunnel should be repaired to form a key connector in the proposed Bradford-Halifax Greenway. The infilling works may cost around £8 million but more than 7,300 people have so far objected to the planning application. 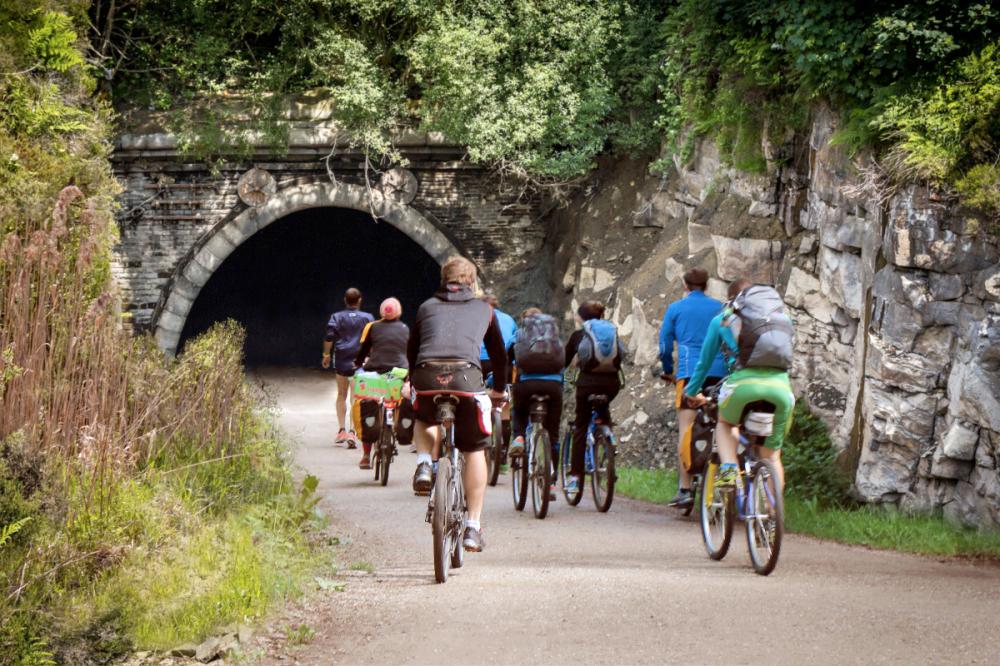 A visualisation of cyclists approaching the tunnel's south portal. Credit: Queensbury Tunnel Society
The West Yorkshire Combined Authority and two councils at either end of the 1.4-mile long underground passageway have expressed their support for the greenway scheme. Last year, a study by Bradford Council found that the route would deliver £5.60 in social and economic benefits for every £1 invested in it, representing high value for money.

The Council’s draft Local Plan, which is currently out for consultation, includes a commitment to expand and improve the district’s network of off-road cycle routes, both for commuting and leisure purposes. An extended Great Northern Railway Trail - running from Queensbury to Keighley - is identified on the policies map, together with Queensbury Tunnel and approach paths.

The chapter on Queensbury states that “The Local Plan will protect the Queensbury Tunnel which runs under the settlement as part of a wider connection with the Great Northern [Railway] Trail which provides a longer walking and cycling route connecting settlements including Cullingworth and Thornton.”

Norah McWilliam, leader of the Queensbury Tunnel Society, said: “We’re obviously delighted that the Council is acting to ensure that this unique engineering asset is safeguarded against the destructive intentions of its current custodians.

“The public’s appetite for walking and cycling was demonstrated strikingly through the first lockdown when so many of us took advantage of the green space and clean air that came with so many vehicles being off the road. We have to encourage more people to step outside on foot and bike by creating more safe routes for them to explore.”

In January, the West Yorkshire Combined Authority published outline proposals for the development of a mass transit scheme linking major population centres across the county by 2040. Queensbury Tunnel was identified as a possible route for the Bradford-Halifax leg, but WYCA made clear that “the initial priority is that it is retained and becomes a walking and cycling route.”

Dr McWilliam continued: “It’s very clear that Highways England and the Department for Transport have not recognised the strategic value of Queensbury Tunnel for future transport use and have managed it blindly as a liability for many years.

“As we build a better future for our children and grandchildren after the pandemic, we have an obligation to invest wisely and ensure that maximum benefit is derived from our existing infrastructure. Queensbury Tunnel presents opportunities to help with improvements to our health, our well-being, the environment, the local economy and connectivity between communities. These opportunities cannot be lost to ignorance, a wasteful culture and lack of ambition.”

Government-funded studies into the feasibility of a Bradford-Halifax Greenway and technical options for repairing the tunnel are due to be completed by the end of this month.

“Highways England’s responsibility for Queensbury Tunnel is purely to maintain the safety and integrity of the structure.

“Our work on the structure benefits any future plans to reopen the tunnel by keeping it safe now, and supports the Department for Transport, local authorities and West Yorkshire Combined Authority as options are looked at for the future use of the structure.

“In the meantime, we are progressing with the emergency works in the tunnel which are essential for safety of local communities and our workforce. Preventing an uncontrolled collapse is the best option for keeping the tunnel viable for future use.”