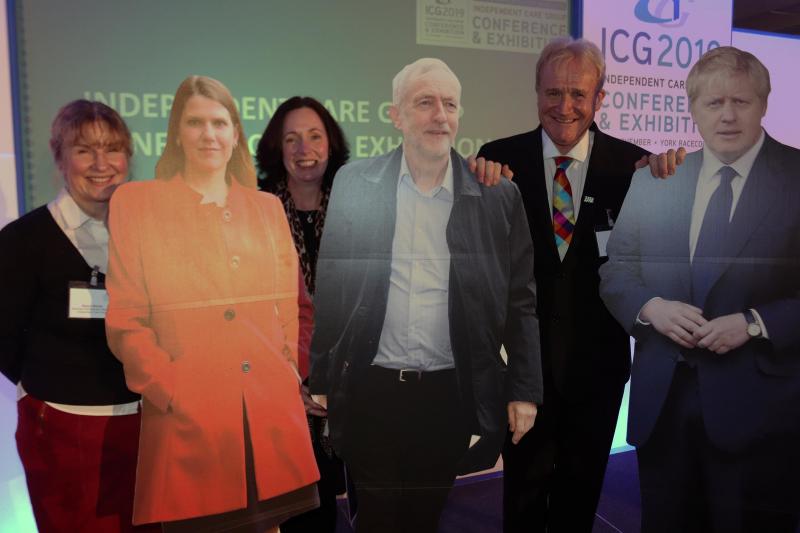 Life-size cardboard cut-outs of the three main party leaders took to the stage today when the politicians themselves failed to attend a major conference on social care.

It wanted to hear how they will tackle the crisis in social care which has left 1.5m living without the care they need.

When none of the leaders arrived, life-size cardboard cut-outs of all three were put on stage instead.

About their non-appearance, the ICG’s Chair, Mike Padgham said to delegates: “I think ladies and gentlemen, that might demonstrate to us how highly they place social care as we head to the polls for the third time in five years!

“This General Election has to be the catalyst for saving social care – we might not have another opportunity for a long, long time.

“Today is a rallying call. It is about sending a very clear message to politicians that social care is in crisis. It is about telling them that this cannot go on any longer. 1.5m people not getting the care they need. Providers failing.

“We appeal to politicians to make social care their number one domestic priority – not just on the hustings, but after the election has been and gone and we have to get on with the job of rebuilding care. Yes, let’s get Brexit done, but let’s get social care done too! This is our time… this is the hour!”

He said government after government – from Tony Blair to Boris Johnson – had failed to grasp the nettle of social care.

“Who is to say that once the election is over and the government decided, they won’t – as they have so many times before – kick social care down the road as they get on once again with Brexit, Brexit, Brexit!

“We have to pledge today that we will not let them get away with doing that again. There is too much at stake.”

Mr Padgham read a poem to the delegates called ‘Broken Promises: a poem for all the parties’ which he commissioned for the event. (copy attached below)

He told the conference he is optimistic about the future.

“A future that will see care provided for the 1.5m who currently aren’t getting the care they need; a future where people don’t have to sell their homes to pay for care; a future where commissioners can pay providers a proper price for care. And a future where carers are recognised and properly rewarded,” he added.

The ICG has launched its own social care manifesto calling on politicians to make firm pledges to tackle social care and commit to investing more in the sector.

In its manifesto, the ICG calls for the next government to get more money into social care to halt a crisis which has seen care homes closing and home care providers handing back untenable contracts.

It wants a guarantee that people receiving publicly-funded care can receive it in their own home or close to where they live so that they remain in their own, familiar, communities.

The ICG calls for better funding of social care, through taxation or National Insurance and for social care and NHS care to be merged and managed centrally or locally.

The ICG suggests that a fixed percentage of GDP should be spent on social care, that dementia should be regarded as a health issue, like cancer or heart disease, that there should be a cap on social care costs, including ‘hotel’ charges and that people should be encouraged to save for their own care, as they do for a pension.

It also calls for measures to improve the standing of care staff to improve recruitment, including a minimum wage for social care workers, above the National Living Wage and more nurse training and bursaries to encourage recruitment and help end the shortage of nurses in care.

The ICG also wants to see a minimum, agreed level of care fees, social care businesses to be zero-rated for VAT so that they can claim it back, as other business sectors do and the Care Quality Commission to have much greater powers to oversee all commissioning practices such as per minute billing and 15-minute visits.