Canada was the venue for this evening’s final Formula 1 Virtual Grand Prix before the sport returns for real in Austria on 5 July and it was George Russell who dominated, taking a fourth victory in a row.

The Williams driver was already the unofficial champion before the start of the race as the only person who could challenge him, Ferrari’s Charles Leclerc, was absent from the grid after competing in this weekend’s Virtual Le Mans 24 Hour encounter. I say unofficial as these digital F1 contests were only ever intended to be a series of eight online races without any points awarded or championship positions, but events overtook this. 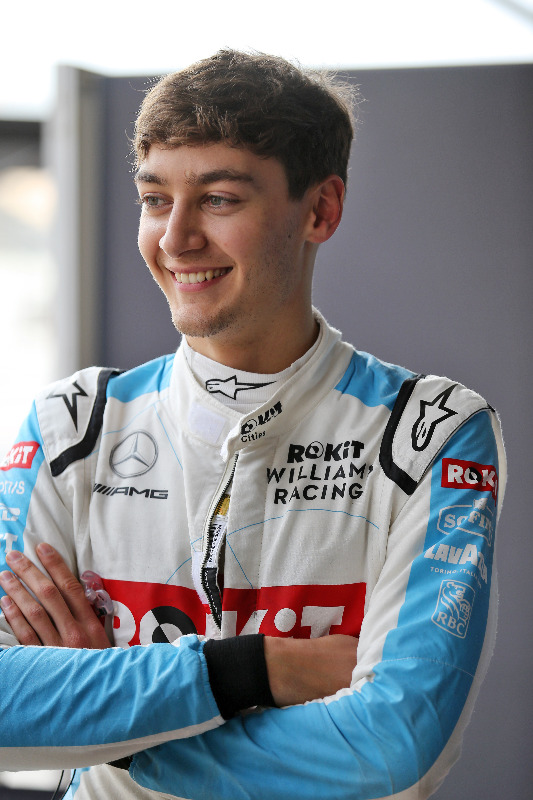 Williams’ George Russell was again in a class of his own
Montreal has always embraced the annual visits of the F1 community and its army of travelling multi-national fans, with a racing theme very much in evidence throughout the downtown area and with the nearby Grand Prix itself around the Circuit Gilles Villeneuve on a man-made island in the St Lawrence Seaway always very well attended.

On the Friday before the virtual Canadian finale we witnessed the expected official announcement that the 2020 Grands Prix in Azerbaijan, Singapore and Japan have joined the ever growing list of those cancelled. This year’s real race in Montreal should have taken place today and there’s still a possibility it may be rescheduled for a later 2020 date, but it’s more likely that pandemic and/or climate reasons will delay its return until next year. 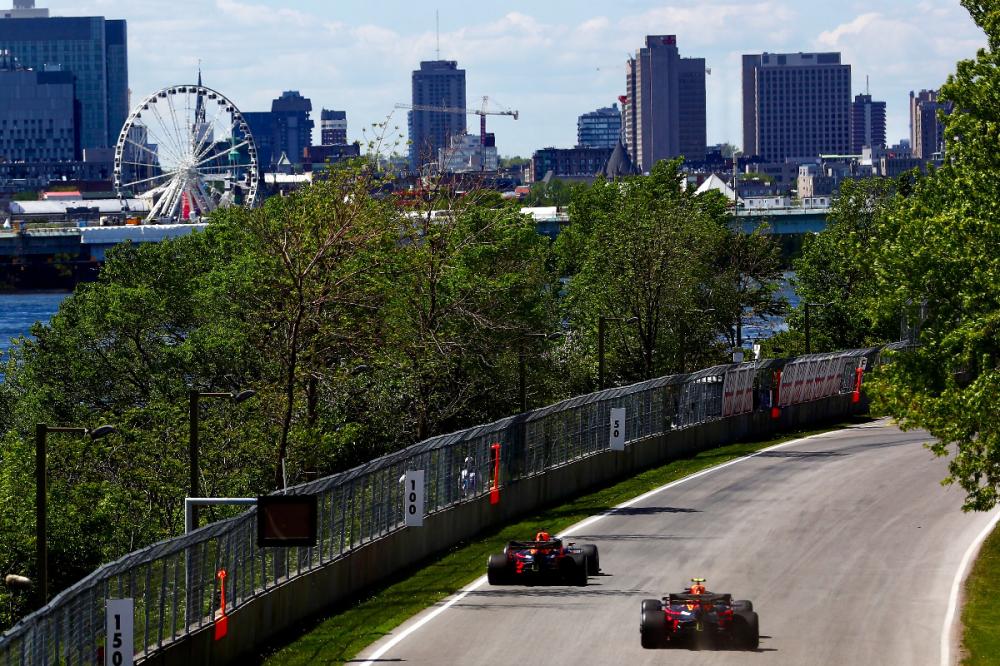 Montreal is a popular fixture on the F1 calendar, but we’ll have to wait for more real action there
Italy’s Imola circuit, which is sadly often best remembered as the track where Ayrton Senna suffered his fatal injuries on 1 May 1994 and which hasn’t hosted a Formula 1 race since 2006, is a strong possibility as a venue for an autumn race, with nearby Mugello also under consideration. Discussions are underway too with Portugal’s Algarve International Circuit, often known as the Portimão Circuit, about a potential brace of races there in late September and early October. The last Portuguese Grand Prix was held at the Estoril track near Lisbon back in 1996.

Returning to today’s virtual race in Canada, Russell lined up alongside his real life Williams team-mate Nicholas Latifi and they were joined by two other current F1 pedallers- Red Bull’s Alex Albon and AlphaTauri’s Pierre Gasly.

French manufacturer Renault used an all-Renault Sport Academy line-up for the Canadian event, with 21 year old Chinese driver Guanyu Zhou paired with the teenage Brazilian debutant Caio Collet. Zhou was making his third appearance in the virtual series after winning the inaugural race in Bahrain and is set to compete in Formula 2 this season, whilst Collet was the best rookie in the 2019 Formula Renault Eurocup and will be returning to the championship again this season.

Elsewhere on the grid there was still no Lewis Hamilton, but at least we did get to see his half-brother Nic race, even if he pretty much had a day to forget. Biffy Clyro (yes, I had to Google that!) lead singer Simon Neil and alpine ski racer Jon Olsson also made their debuts. 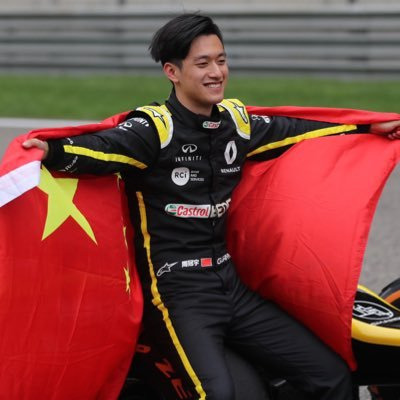 Chinese F2 driver Guanyou Zhou returned for a third race
Russell stamped his authority on proceedings in the 18 minute qualifying session as he set the fastest time ahead of Albon and Latifi and come the start of the 35 lap Grand Prix this trio of current drivers romped away out front. On the third lap we briefly witnessed a Williams 1/2 as Russell led the Canadian Latifi before Albon regained second position and Latifi compounded matters by spinning into the famous Wall of Champions where so many F1 greats have suffered in the past at the exit of the final chicane.

Russell and Albon both made their first pit stops on the seventh tour, switching to medium specification tyres, and as the race progressed the leading Williams driver pulled out a 4.5 second lead over his rival, but close friend Albon, saying over the radio to his engineer “What on earth has been going on behind me?!”

Former F1 driver Esteban Gutierrez was already making third place his own before he and the leading duo all headed down the pitlane to make their second and final pit stops and so it remained to the chequered flag, with Russell, Albon and Gutierrez climbing onto the final podium of the series. Just behind them Collet put in an impressive drive to complete the leading quartet. 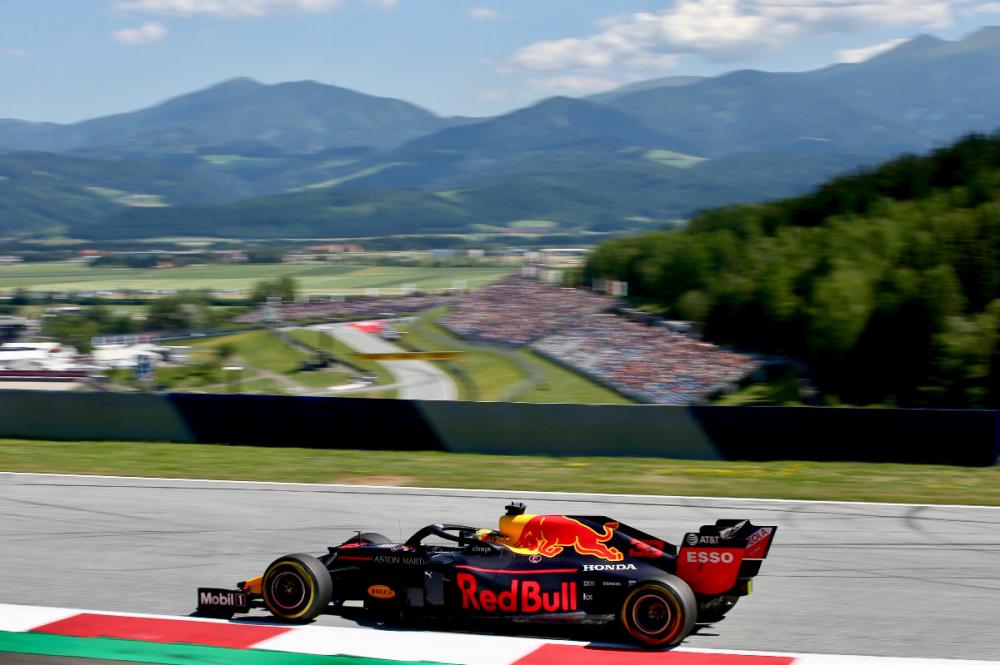 Austria’s Red Bull Ring, demanding and so beautifully located too
In just three weeks’ time Formula 1 fans around the world will at last be able to enjoy the opening real Grand Prix on this season’s much delayed and amended calendar and it‘s fitting that this race and the subsequent one seven days later will be at the technically demanding but scenically beautiful Red Bull Ring circuit, one of my favourite venues on the whole F1 calendar.

Sadly but understandably the event is set to take place behind closed doors with a whole host of strict anti-coronavirus measures in place and fans will have to wait until at least later this year, if not beyond, before being able to attend a race in person to cheer on their heroes. It will at least be great though to see the sport spring to life again as it seems such a long time since the last real race back on 1 December in Abu Dhabi.