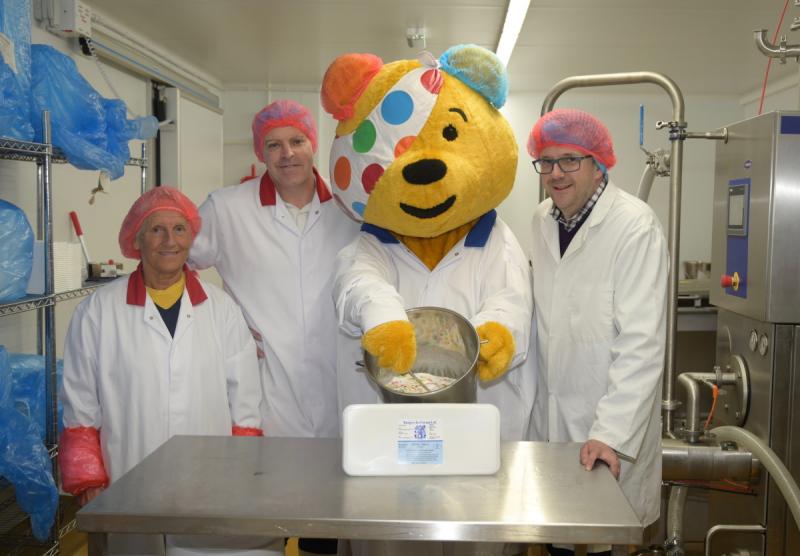 The Children in Need mascot joined James Ducker from Langlands Garden Centre and local children at Burgess Ice Cream’s factory on Tuesday 29th October, where they were shown how to make ice cream.

The visit kick-started Langlands’ 2019’s Children in Need fundraising. The team is aiming to raise £5,000 through a range of initiatives, the first of which is a collaboration with Burgess Ice Cream to create a limited-edition ice cream. A percentage of the proceeds from Pudsey’s Dream ice cream sales will be donated to the 2019 Children in Need appeal.

After donning hair nets and lab coats, Pudsey, James and the children headed into the factory where they were shown how ice cream is made by Burgess general manager Richard Wilson, and each had a turn mixing the new product.

Eve Wilson was one of the children involved. She said, “I can’t believe I made ice cream with Pudsey Bear! It was so exciting, and I can’t wait to try the ice cream.”

James Ducker from Langlands Garden Centre added, “Our staff are aiming to raise £5,000 for Children in Need this year through a whole host of different activities. The charity ice cream is the first of those, and the visit from Pudsey was a great way to get the fundraising off the ground. Everyone did a fantastic job and whilst I think we have some superb future ice cream makers on our hands, Pudsey Bear might be better sticking to his day job!”.

Pudsey’s Dream ice cream will be on sale at Langlands Garden Centres in Shiptonthorpe, Leeds and Sheffield from Saturday 9 November. 50p from every tub sold will be donated to Children in Need.