Choices, We All Have Choices: Both Of You By Adele Parks 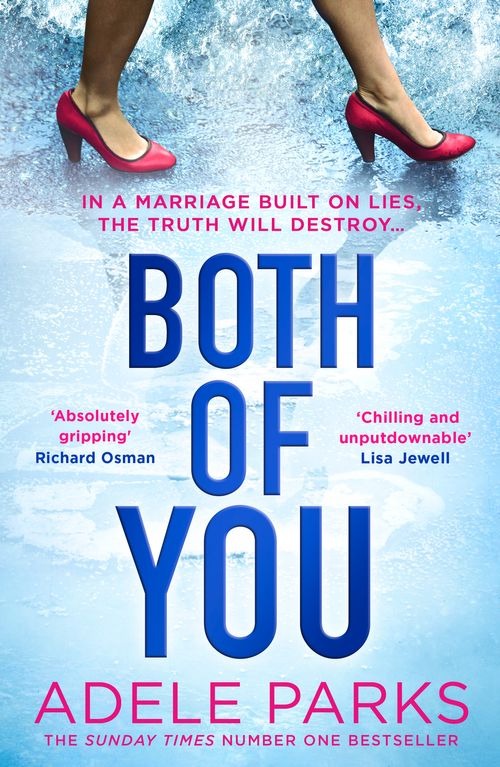 The weather having been what it has over the last week or two, and Covid having restricted activities just a little, it’s been a great opportunity to read, if only to escape yet another ‘Christmas Special’ on TV. And this book was a good one! It is a hard review to write without giving away the plot but I’ll give it a go without need of a spoiler alert!

The novel opens with an unidentified woman waking up to find herself lying on the floor, tied to a radiator in an empty room. She has no idea where she is or how she got there. Visiting her again and again, the reader is treated to some realistic detail of what it is like to be held captive.

Then, Leigh Fletcher is reported missing by her husband when she fails to return from her regular weekly work trip. It appears they argued before she left and he has put the lack of usual texts and phone calls down to her ‘making a point’. Arguments between them are rare but this one was bad. It turns out, she is his second wife, his first having died when his children were small. Leigh has adopted his two sons, who have become ‘their boys’. Home life is comfortable with all its familiar mess and normality. Leigh has kept them all on track, cooking, cleaning, living, loving and laughing. Her disappearance leaves them shattered; the once strong unit is fractured.

Kai Janssen is married to wealthy Dutch businessman, Daan. It was a whirlwind courtship before he romantically got down on one knee and proposed. Theirs is a life of luxury in a London penthouse apartment, with dinner parties, theatre trips and all the trimmings money can buy - until Kai goes missing, in the same week as Leigh. Daan reports her disappearance to the police. She has not returned from her regular trip up north to visit her ailing mother and has seemingly evaporated, leaving no trace. Her disappearance leaves him at first distraught, then angry.

Leigh Fletcher’s case lands on the desk of DC Clements; Kai Janssen’s on the desk of her colleague. Clements knows that people disappear all the time - far too frequently. Often, they are running away, and sometimes taken against their will. Sadly, a few never return. Her sidekick, Constable Tanner, hopes to find a body because ‘he’s never investigated a murder and is dying to’ – pun intended.


Also by Artis-Ann ...
WHO Knew? - The Murder Mile By Lesley McEvoy‘From Small Things, Greatness’: A Single Thread By Tracy ChevalierOptimism: A Useful Trait: A Man Of Honour By Barbara Taylor Bradford"Coincidences Are As Rare As Unicorns" : A Song For The Dark Times By Ian Rankin‘The Heart Of Most Murders is …’ : The Heron’s Cry By Ann Cleeves
The two missing women are from very different worlds and their disappearances are unlikely to be connected other than by timing - and yet, something tells Clements they might be, and she brings both case notes together. Her superior officer has told her to back off. The Covid pandemic is about to unleash itself, lockdown is imminent and the police expect to be kept busy – too busy to deal with free-thinking adults who have simply walked out of their lives. Clements, an experienced detective, trusts her gut instinct, however, and is determined to find out the truth and hopefully bring both women home.

Leads in both cases are few; both husbands are acting strangely. Why does Daan become so angry? Kai might have been only one of many women he has bedded but she was the one he married. Mark married Leigh within a year of the death of his first wife. Was her death as innocent as it seemed? Was it too soon? Could Leigh ever live up to the ideal which lingers in his memory? He seems to become reliant, too quickly, on alcohol – and Leigh’s best friend, Fiona, steps in to help balance the ship and look after the boys.

Clements is dogged in her pursuit of the truth and her investigations into these seemingly unrelated cases slowly uncover a complex web of secrets and lies. When the principal player in the mystery is at last revealed, the ending comes quickly and the reader is seemingly hurried along to the tense and gripping climax.

The narration is shared among all the main characters and Parks successfully creates a different voice for each. The reader shares the reactions of them all: Leigh and Kai, two husbands, two children and a best friend. The clues are drip-fed to the reader although a major twist is revealed less than half way through, adding a whole new dynamic. Parks casts a shrewd eye on family relationships and interrogates what we see, what we look for and what we miss, even if it is staring us in the face. She considers honesty, idealism and just how far some people will go to satisfy their desires.

I was hooked from the start of this novel and was swept along. Not all the twists are predictable. It was only when stepping back and having reached the conclusion, that it became clear some suspension of disbelief had been called for. Is it plausible? Does it matter? This is a dark and unsettling tale about jealousy and choices and how far some people will go to get what they’ve always wanted. Most, if not all, questions are answered but the reader is more than capable of applying a sprinkle of imagination to tie up loose ends for themselves.


Both of You is published by Harper Collins