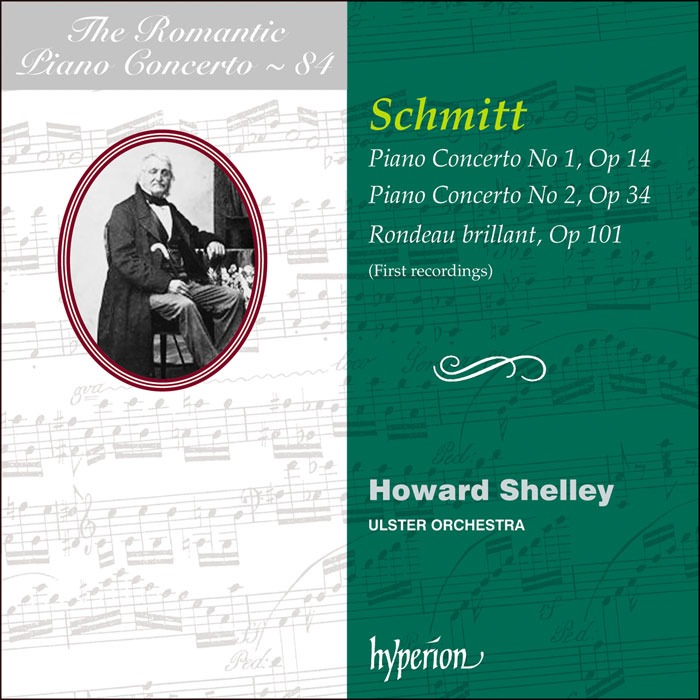 The indefatigable Howard Shelley introduces us to Schmitt’s contributions and it is a more than welcome addition to the catalogue. There are Beethoven (third concerto) and Mozartean-like influences.

The orchestration is for flute, two oboes, two bassoons, two horns, two trumpets, timpani and strings. The beautiful adagio is tenderly played with such wonderful interaction between soloist and orchestra. The wistful playing leads into the jaunty playful finale which once again is phrased so well by Shelley demonstrating his adroitness.

The second concerto for the same orchestration opens with an allegro in triple time and some lovely woodwind playing especially the bassoons.

Both concertos feature Schmitt’s ability to develop a great theme and his ability to write a romantic adagio supported by strings. The catchy tune and virtuosic playing of the dazzling last movement will make it a one-hit wonder.

Playing on a Steinway in the Waterfront Hall, Belfast, Shelley concludes with Schmitt’s Rondeau Brilliant, the polonaise theme transforms into, as Nicholas points out, a glittering, nimble-fingered helter-skelter, providing a thrilling conclusion.