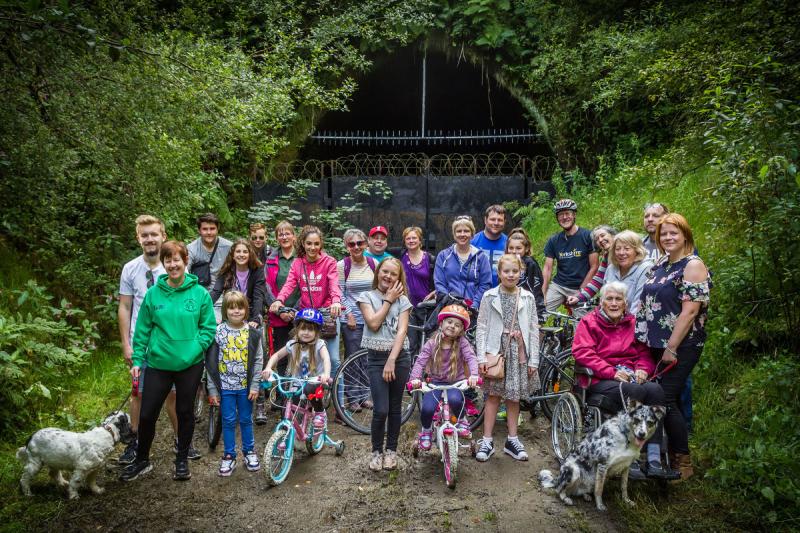 Campaigners at the tunnel. Photo by FourByThree.
Bradford Councillors have expressed overwhelming support for the idea of restoring the disused railway tunnel under Queensbury, West Yorkshire, to host a cycle path connecting the city to Halifax.

They voted unanimously in favour of a motion tabled by Andrew Senior who represents Queensbury ward for the Conservatives. It asks Bradford Council to engage with interested parties in exploring options for the tunnel, investigate the feasibility of taking on its ownership, facilitate discussions with the Department for Transport (DfT), Highways England’s Historical Railways Estate (HRE) and other funders, and requests an early report to the Executive setting out these actions.

Mr Senior told Councillors: “The tunnel has been earmarked for an abandonment project involving blocking it all up with concrete at a likely cost of £3 million. If the Council was to allow this to happen, it would mean this marvellous piece of Bradford heritage would be lost forever.” 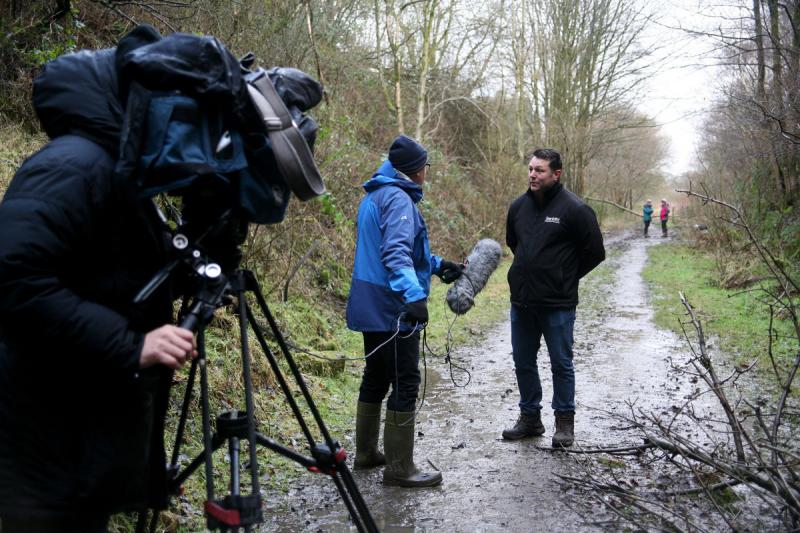 Andrew Senior interviewed for ITV Calendar. Photo by Queensbury Directory
Of the tunnel’s “exciting” proposed reuse, he said: “It will attract people from outside of the Bradford district to visit and, in a forward thinking way, this project will create an income back to the Council.”

Paul Cromie, Independent - a fellow Queensbury ward Councillor - also focussed on the economics. “We need to keep in mind the long-term effect the tunnel will have on the environment and the community. Sustrans estimates that, over the next 30 years, it will benefit to the tune of £37.6 million from a cycle network with the tunnel as its centrepiece. £3 will be returned for every £1 spent.”

“Queensbury Tunnel - we support in principle…it’s in line with our cycling strategy to expand key cycling networks across the district,” said Councillor Alex Ross-Shaw, Executive Member for Regeneration, Planning and Transport. “The issue is trying to work out the accurate costs. Highways England’s is many, many millions; the Queensbury Tunnel Society - who’ve done fantastic work in raising awareness of the tunnel’s potential as an asset - their figure is a lot lower.”

Mr Ross-Shaw revealed that the Council will be asking the Historical Railways Estate to extend the June deadline imposed on the Council - after which abandonment works will start - to ensure sufficient time is available to establish a robust repair cost and assess possible funding sources. HRE recently told the Society that works are on course to get underway this summer, subject to the outcome of a planning application. 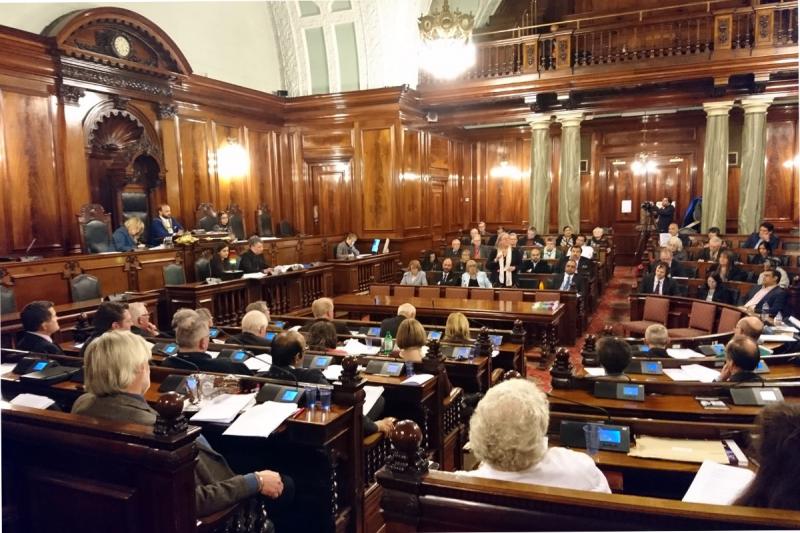 Councillors at the meeting
Taking up this point, Councillor Alun Griffiths from the Liberal Democrat and Independent group, asserted: “It’s been there for a hundred years; it won’t hurt to hang around for a bit longer whilst a decision is made and funding is sorted. There is no urgency to fill it in. We should do everything we can as a Council - with the support of other organisations - to put a stop on the filling-in so we make some sensible decisions about what could be an absolutely brilliant asset to this community.”

Norah McWilliam, leader of the Queensbury Tunnel Society, responded: “What the Councillors’ support demonstrates is that this is not a party political issue. Everyone with their eyes open can see the sense in transforming our historic tunnel into a facility that will improve connectivity, benefit the environment and help in our battle against obesity, rather than pumping public money into a valueless abandonment scheme.

“We must look now to the Council’s own structural investigations to ensure they deliver success, not excess. We have said from the outset that the only sustainable repair option for the tunnel is one that’s proportionate, pragmatic and developed by engineers with deep, specialist insight. We don’t want to waste public money on ‘over-the-top’ repairs either.”

Support for the tunnel’s reuse as a cycle path continues to build. An ePetition, which seeks to suspend HRE’s abandonment plans, has gained more than 7,200 signatures, both from across the UK and abroad. It can be signed at www.tiny.cc/QueensburyTunnel.