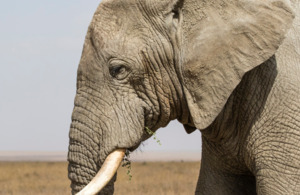 Elephants are commonly targeted for their ivory tusks and the demand for ivory is known to contribute to poaching, driving a decline in elephant populations. The ban will ensure vital protection for the world’s elephants by putting a stop to the UK trade in ivory.

The ban covers ivory items of all ages, not only those produced after a certain date, allowing only a narrowly defined set of exemptions. As a result, it will now be illegal to deal in ivory items unless they have been registered or have an exemption certificate.

"Today is a good day for elephants.
The number of elephants free in the wild has declined by almost a third, with the savanna elephant population plummeting by around 30 percent – equal to 144,000 elephants – across 15 African countries between 2007 and 2014. It’s estimated around 20,000 are also still being slaughtered annually because of the global demand for ivory.

The UK’s world-leading Ivory Act is one of the toughest bans on elephant ivory sales in the world, with some of the strongest enforcement measures. Those found guilty of breaching the ban will face tough new penalties including an unlimited fine or up to five years in jail.


Animal Welfare Minister Lord Goldsmith said:
"The world-leading Ivory Act coming into force represents a landmark moment in securing the survival of elephants across the globe for future generations.

"Thousands of elephants are unnecessarily and cruelly targeted for their ivory every year for financial gain. As one of the toughest bans of its kind, we are sending a clear message the commercial trade of elephant ivory is totally unacceptable.


The ban coming into force will now close domestic ivory markets, representing a step forward in leading global efforts to protect the elephants after delays due unsuccessful legal challenges.

The UK Government is pushing for a global species abundance target to be agreed at this year’s Conference on Biological Diversity and has contributed £3.98 million through the Illegal Wildlife Trade Challenge Fund to projects around the world that protect elephants from poaching and illegal trade to benefit wildlife, local communities, the economy and protect global security.

The Government is also considering extending the Ivory Act to other ivory-bearing species and will publish the response to the consultation later this year.