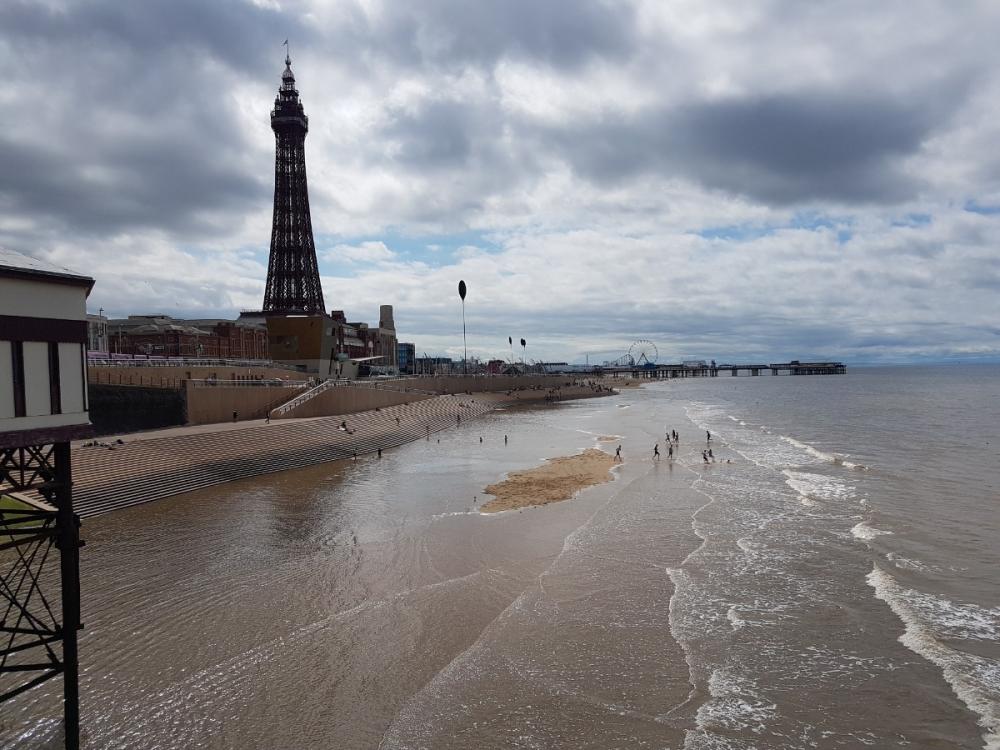 “If you can see the Tower we’re nearly there!”

The nostalgic narrative was the same but there was something different: maybe it was the fact that it was 2020 and I had found myself using the very same words to my wife that had been uttered to me by mum in 1967!

She’s been dead for many a year now, and so has dad, but there was a time when Blackpool was my second home. ‘Back in the day’ Leeds families fell into two categories: West coasters and East Coasters: those who headed to Morecambe, Southport and Blackpool and those Loiners who preferred the joys of Scarborough, Bridlington, Whitby and Filey.

We were West Coasters and, towards the end of the 70’s, my mum would look at dad and say: “Peter, can’t we go to Brid for a change? Blackpool’s been your second home for as long as I can remember!” But he’d have none of it!

The Tower Ballroom and Circus, Notarianni ices, The Golden Mile, trams, donkeys, Kiss Me Quick Hats, Gypsy Petulengro, the piers and, of course, The Pleasure Beach: all part of my staple diet as a child from landlocked Leeds!

Today was my trip down memory lane. I was returning to Blackpool for the first time in decades and there was an air of expectation as we covered the last 20-mile run in to that most British of resorts.

Daish Holidays’ North Shore Hotel at 224 Promenade would be hosting us for two nights and I was looking forward to a very English experience. 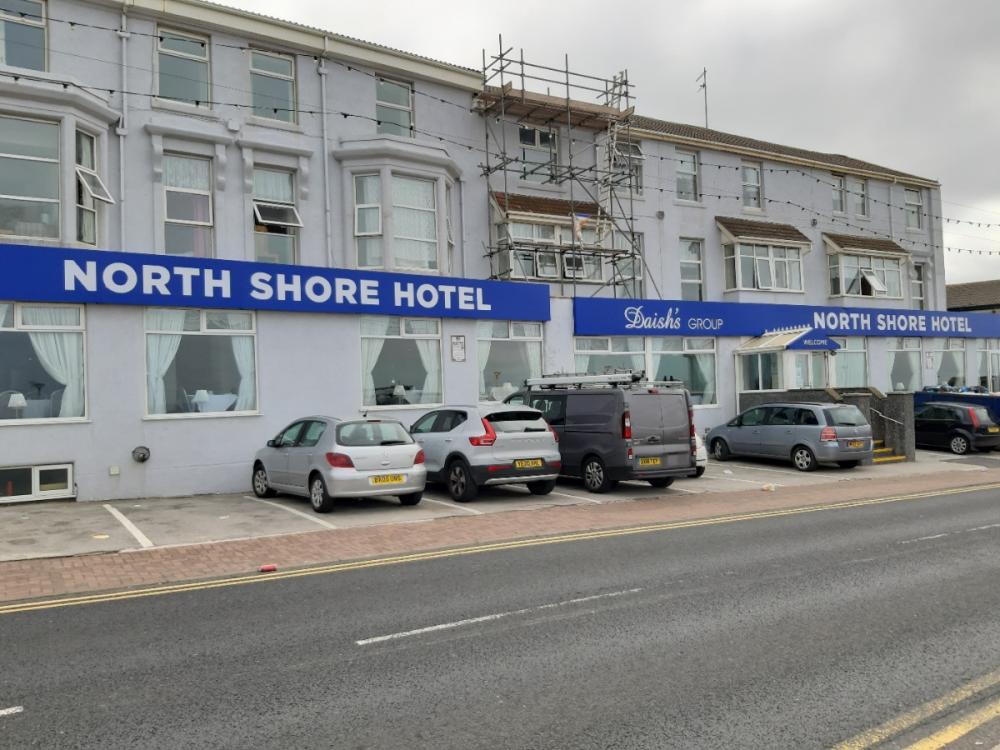 But it took just seconds for the shock to register as we drove along the sea front! Where were they? Surely they hadn’t been retired? Then, a gleaming metal knight floated past me with the near silence of a Promenade ghost. Who was this interloper? A ‘modern’ tram…..just like the ones in Sheffield and Manchester? But where were the iconic cream and green ones that used to have interchangeable seats depending on whether you were heading to the North or South Shore?

It was that long since I’d been to Blackpool that even the ‘new to me’ trams were still comparative veterans! However, it didn’t take long to realise that very little else had changed. It was all there, slightly more modern, perhaps, with a few more facemasks here and there, but the bling was intact!

We were too early to check-in so, parking our car outside the North Shore Hotel, we made for the nearby North Pier, opened in 1863 and Blackpool’s only Grade II listed pier. 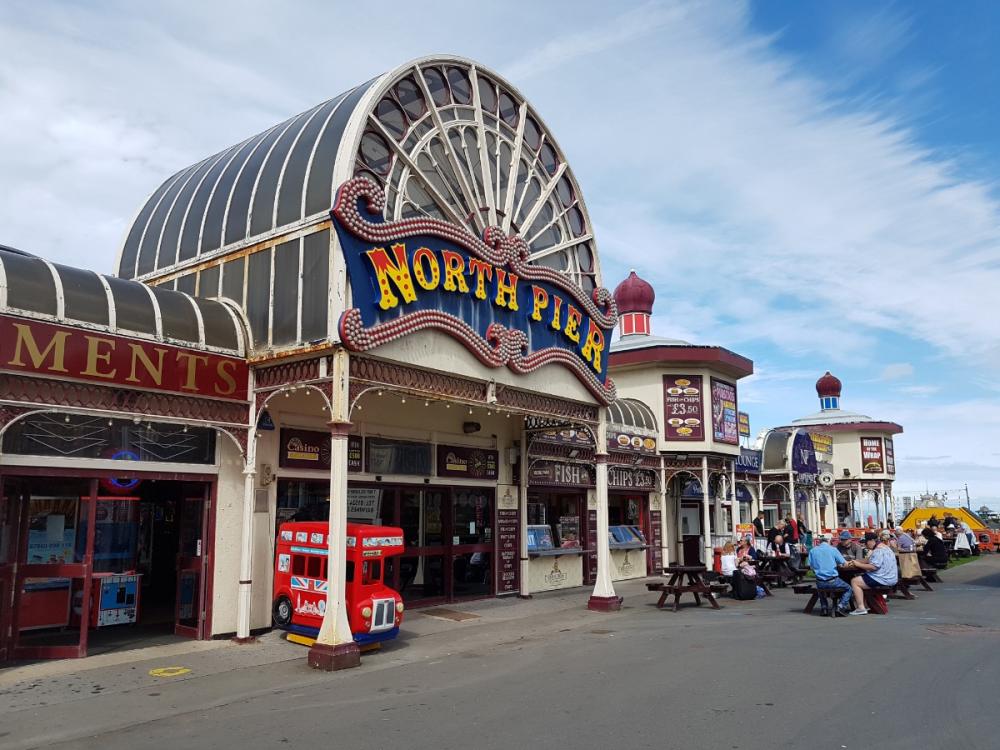 Photos of Harry Corbett and Sooty, along with Morecambe and Wise, Lily Savage and Frank Randle, spoke of the structure’s long entertainment pedigree, the original brainchild of architect Richard Knill Freeman. 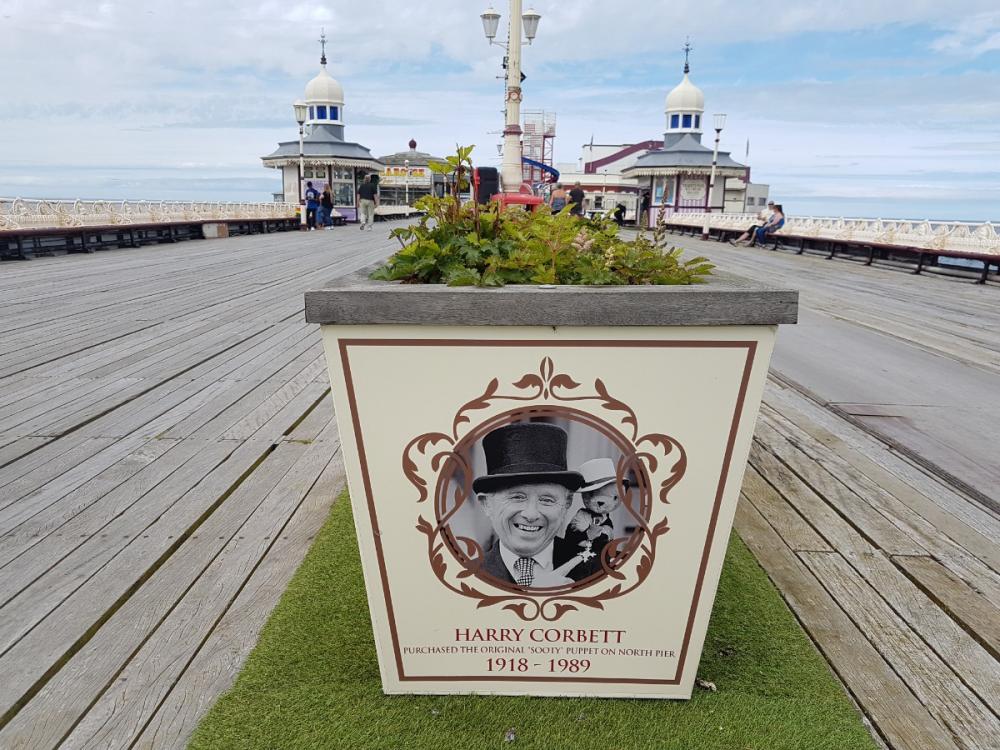 At the end an organist played in the Sunset Lounge & Carousel Bar as visitors quaffed their 10.30am pints whilst listening intently from the comfort of their patriotic red, white and blue under cover deckchairs. Outside the sun shined brightly. The prodigal son had returned.

Right now the British ‘staycation’ is alive and well, largely due to the Covid-19 pandemic, and it is no surprise that hotels are reporting bumper receipts as lockdown lifts a little more day by day: for now at least!

So, it was a welcome opportunity to re-visit the West coast to see whether Coronavirus had had any positive outcomes for the resort.

Initially the North Shore Hotel was quiet but this was a temporary illusion!

Not long after our arrival, there was a power cut further along the Promenade whilst another hotel, which had permanently closed its doors a few days earlier leaving pre-booked holidaymakers standing outside with nowhere to stay, had delivered some good news to the North Shore.

“We had a huge queue last night, all wanting rooms”, reported our breakfast waitress on the second morning.

“We’d nowhere to put them all so we booked in who we could and helped others find rooms elsewhere because their phone batteries had run out. Having said that, it wasn’t easy, the resort’s packed.”

But, for those who did secure a room at the North Shore, most would not have been disappointed.

The North Shore Hotel has, traditionally, targeted the grey market – older people looking for all-inclusive ‘value-for-money’ coach holiday stays - however, spying an opportunity to piggyback the Coronavirus demand for UK staycations, the hotel has been quick to adapt its offering to the wider family market and this was reflected in the profile: a genuine mix of young and old, certainly at Daish’s Blackpool property.

It is a clean, tidy, albeit simple budget hotel that will make you feel welcome. 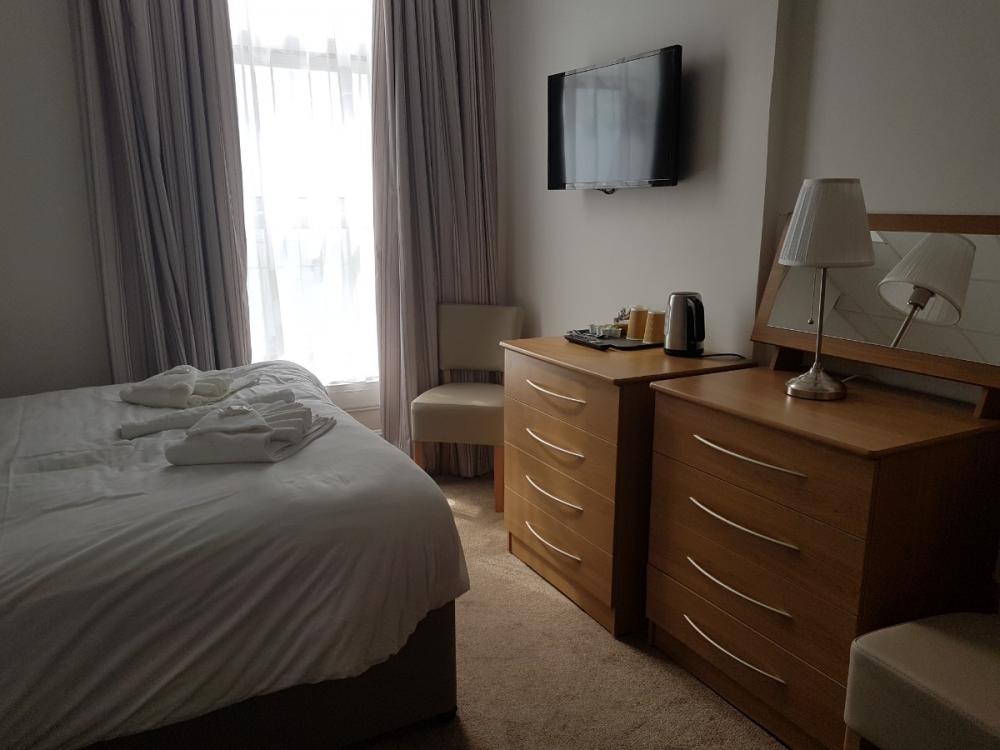 “Ooh, I’ve forgotten my Corona visor!” confessed one of the housekeeping ladies as she stepped to one side to let us pass on the staircase. “Everything all right in yer room love?”

“Smashing thanks,” I replied. And it was. Simple and basic but clean and more than adequate. The North Shore is a classic British hotel located on the front and, once in full flow, it will have a coffee bar, full catering and yes, evening entertainment! But, for now, like so many other properties, it is experiencing a slowly, slowly re-opening after months of lockdown.

“You can get a bar meal tonight but, right now, you might say we’re more of a B&B operation until everything is back in full swing,” we were told.

But, in truth, that was fine. It gave us chance to ride out to Cleveleys on the bus one night, courtesy of our phone app tickets from Blackpool Transport, and enjoy a Thai curry.

And, if food were the primary reason for our visit (which it wasn’t!), then earlier in the day we had taken in the joys of a cheese toastie on Lytham Road at the back of the South Shore’s ever-present Manchester Bar, 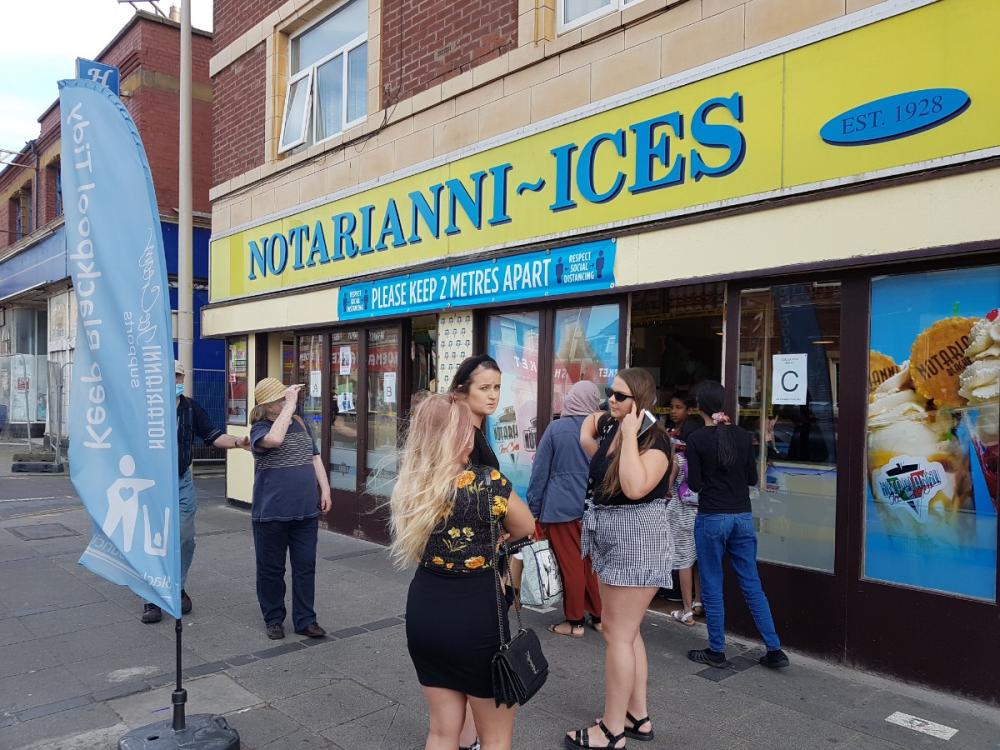 ....ahead of a Notarianni’s ice-cream on nearby Waterloo Road and a visit to Blackpool Pleasure Beach.

However, whether cheese toasties, ice-cream and fizzy drinks are a perfect fit with the Grand National, The Big One or any of the Pleasure Beach’s other ‘Number One’ rides is debateable! 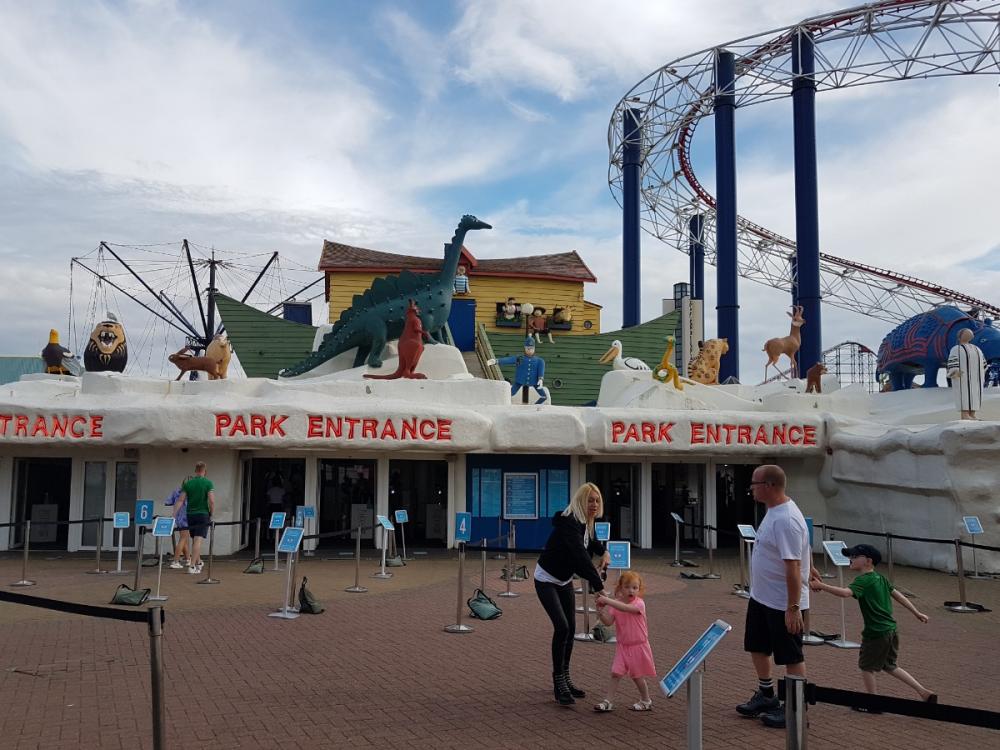 – I had been in it many times as a kid - but, more than a ride, it now sat atop a grander entrance to the theme park. No more simply ‘walking in’ as we had done in the sixties, it was now about security checks, barriers, handwash and physical paper tickets or QR Codes depending on your poison!

But the Kentucky Derby was still there along with the Revolution, The Steeplechase and the Derby Racer. 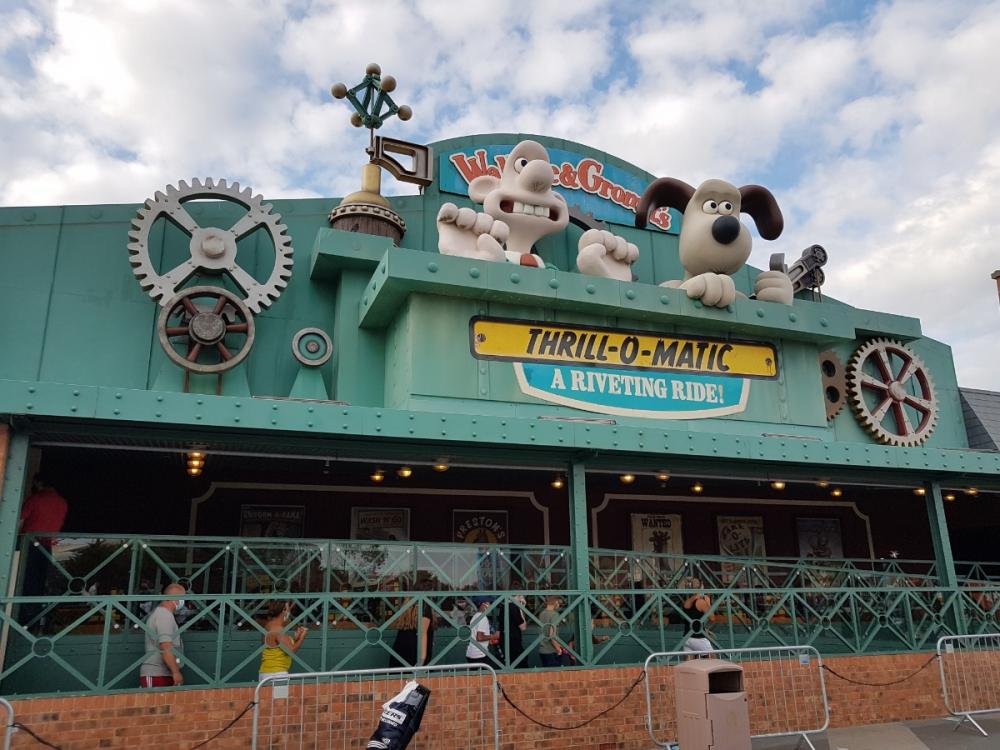 Village People and YMCA was blasting out here and there, the laughing man was still tickling everyone’s fancy, albeit in a different location, and there were even signs in Russian, a tell-tale comment on the changing face of multi-cultural Britain. Everything was the same but not quite!

We played it safe on the rides, fearing that the afternoon food might make an unexpected reappearance if we went on too many ‘challenging’ rides! Nevertheless, it was as much fun walking round the Pleasure Beach as it was watching those of a younger generation enjoying themselves. I had just turned into my dad!

Using our multi-functional Blackpool Transport passes, downloaded to our phones and for use on both buses and trams, we caught a tram back to the Tower for our 380ft ascendance to the Tower Eye and Skywalk. 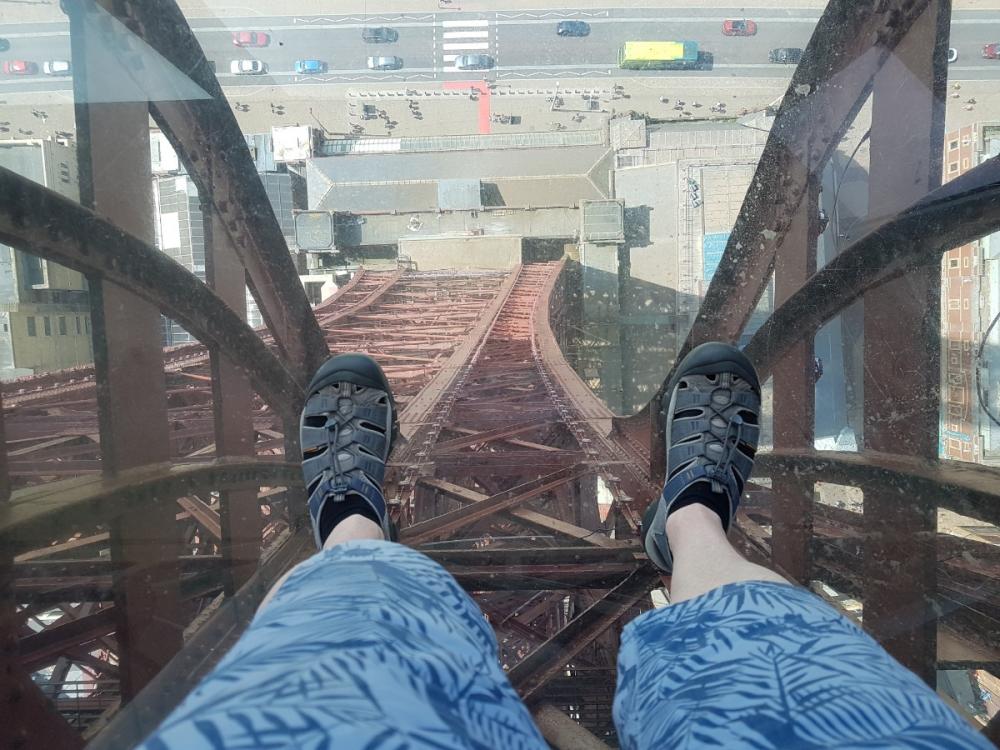 There, a five centimetre thick glass viewing platform enables you look down – a long way down! – out to the Irish Sea and even along the famous Promenade below.

The 126-year-old structure originally inspired by Paris’ Eiffel Tower, still draws them in like a magnet.

But, while the sun may be shining above ground, down in the depths of the Tower, things are very different indeed. The Blackpool Tower Dungeon houses some of the creepiest and most callous creatures you’ll ever encounter, and they’re just waiting for some company.

With a full cast of brilliant actors, 10 shows, fully immersive 360° sets, special effects and an exciting drop ride, it's a 60-minute journey through 1000 years of Lancashire’s gloomy past.

Madam Tussaud’s, however, just a little further along the Prom, is a little less harrowing, with the likes of Ant and Dec 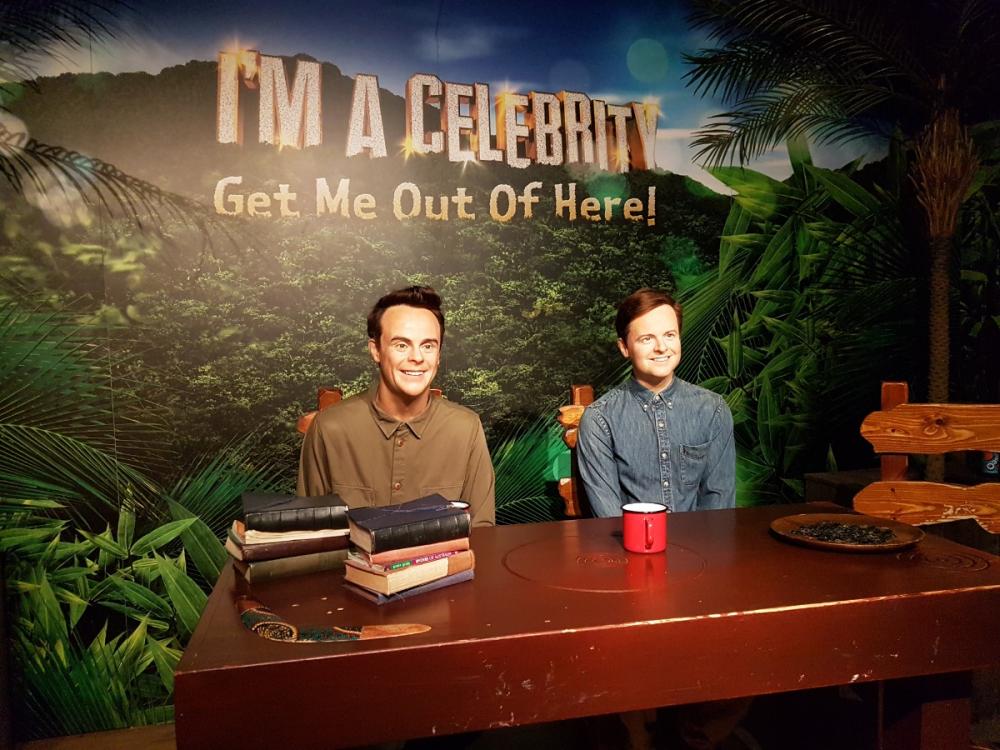 and a myriad of other celebs inviting you to join them for the afternoon.

Gypsy Lavinia had a special offer running: “£5 both palms. Today only.” Did she know something I didn’t?

So little had changed.

“Sandwich?” prompted my wife. She’d made a pack up, just like my mum. We were sitting on the Front overlooking the sea. “They’re egg and I’ve brought a bottle of Coke,” she added.

What, no flask of tea? Clearly two things had changed: I was 40 years older and Coke would never be an adequate substitute for mum’s thermos flask!