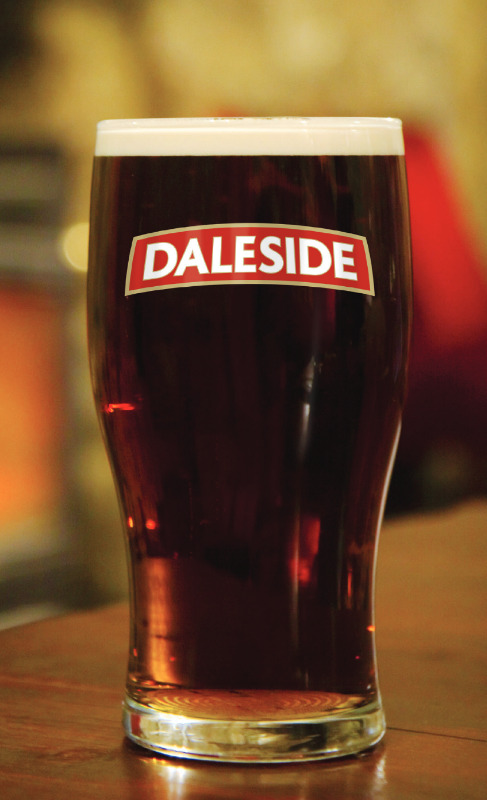 Old Lubrication: fruity, spicy, nicely zesty, not too much head, low carbonation: a beautiful taste not forgotten even after an absence of a quarter of a century. Behind it is the fascinating story of one of the earliest and best of microbreweries which has gone from strength to strength over a thirty-year period.

I would know this beer anywhere. I used to drink it years ago, in some volume, in the bar at the St. George's Road Cricket Ground, Harrogate, and it is a taste I associate with warm summer afternoons and the sound of leather on willow and those sixty-over Yorkshire League matches, so demanding on the players they needed to take a mid-innings ten-minute ‘siesta’. No wonder so much Old Lubrication went down at the end of the day.

Then I lost touch with it. It just seemed to disappear. Recently, it returned like an old friend thought lost forever bringing much pleasure with it.

It was originally crafted in a five-barrel plant by The Big End Brewery which back in 1988 was something of a rarity, micro-brewing being then in its infancy, if it were alive at all. It was set up in Otley Road, Harrogate, by Bill Witty, a farmer-turned-brewer. He was a founder member of CAMRA whose love of real ale may well have stemmed from the Witty family tradition of brewing which goes back more than 600 years to when they arrived from Belgium. Bill retired from the company in 1999 but continued to have close links until he passed away in 2007. He is remembered fondly as a pioneer in the fight to restore real ale.

It is a matter of interest, by the way, that the doyen of American brewers, Garret Oliver, actually spent some time learning his craft under Bill before becoming an apprentice brewer at the Manhattan Brewing Company, later head brewer at the Brooklyn Brewery, in New York.

In the winter of 1991, changing their name to Daleside, they moved to larger premises at Starbeck, between Harrogate and Knaresborough, with Bill’s son Craig now on board. The converted carpet warehouse, in Camwal Road, allowed them to expand into a 20-barrel plant, at first producing Daleside Bitter, Dalesman Old Ale and Monkey Wrench. Finding their ales increasingly in demand by a public newly awakening to the delights of the real stuff, they gradually extended their production to about 70 barrels a week, selling to pubs, beer merchants and eventually supermarkets.


Also by Andrew Liddle...
Theatre In The RowntreeAugust's Beer Of The Month - Rooster’s Craft Beer PerfectionMixed Reaction To Brewing Tax ReformsSwing That Music At Lawrence BatleyThe Fat Cat At Kelham Island. Where History Was Made
The brewery premises were expanded in 1995 and again in 1999 to meet demand and in June 2000 new equipment was installed and the whole plant re-organised.Over the years their real cask ales, kegged beers and premium-bottled beers, brewed with the best quality malts, whole-leaf hops and Daleside’s own yeast, have achieved wide recognition winning local, regional, national and international awards. Daleside Lager was launched in April 2013 and quickly established itself in that market.

To get back to Old Lubrication: it was originally kept on by Daleside but did, alas, disappear at some stage after Big End had ceased to be, but its recent reappearance, in bottled form, brought out by Daleside, immediately pricked my interest and whetted the appetite. I paid them a visit to investigate and first spoke to head brewer, Robert Millichamp, to get to the bottom of it. Originally from Gateshead, he is one of a very rare breed of brewers who actually has a degree in the subject. He studied Brewing and Distillery, a subject new to me which I should imagine is very popular, at Heriot Watt University, in Edinburgh.

He proudly shows me round the busy well-organised 20-barrel kit, in Starbeck, where I am pleased to witness traditional brewing at first hand, using the traditional mash infusion one-step process in traditional open-top and conical fermenters. It couldn’t be more traditional. He has worked at Daleside in two spells since graduating. He returned in 2019 as head Brewer after a spell away, at the award-winning Mordue Brewery, Wallsend.

‘Old Lubrication was never officially extinct,’ Robert tells me. ‘It’s still very popular and we resurrect it from time to time - and at the moment we are bottling it.’ I press him on its future and after a moment’s thought he agrees there’s a fair chance of it re-appearing on draught when all eight furloughed staff return and things are back to normal.

He describes their Blonde (3.9 ABV) as their best seller and Monkey Wrench (5.3) as their ‘ambassador’, the one that’s scooped the hugely prestigious SIBA award and is a serial winner of CAMRA gongs. I enquire about the marketing strategy behind bringing out an ale called Old Leg Over (4.1), which seems to be adopting the blokey-jokey mode of promotion almost de rigeur these days in the trade.

‘Actually it used to be called Yorkshire Dales Country Style,’ he says. I have an instant recall of a fruity mid-brown ale of that name. ‘It had an image of an old man climbing over a stile which led everybody to call it “Old Legover” so we went with it.’

Clearly Robert loves his job, is delighted to be back and his passion is brewing. ‘Hopefully, soon we’ll be able to develop some new beers,’ he confides. He confesses to ‘inventing on average four a year’, his greatest pleasure being reading the feedback on Untappd.

Busy with a batch of Blonde, he takes me upstairs to meet Mike Berriman, who for the last five years has been Marketing Manager, bringing with him more than twenty years’ experience in similar positions with brewing giants, Vaux and Cameron’s. I find him poring over design drawings, considering colourful marketing images for new beers, seasonal beers, promotions, pump clips. His shelves are equally colourful, laden with bottles of beer not, alas, for drinking but display and historical record. Charts on the walls reveal sales figures and distribution details.

‘We enjoy a strong reputation for a full range of good honest beer,’ he says, waving an arm at a shelf. ‘We have a great reputation for our range of good honest beers and also have an excellent relationship with our customers throughout our core trading area of Yorkshire and the North East. Through our strong relationship with Wetherspoon's and leading cask wholesalers, customers can enjoy our beers locally, regionally and nationally.’

I wonder if beer as good as this, a permanent fixture in such fine pubs as The Wheatsheaf, at Borrowby, The Anchor (Wixley), Duke of Wellington (Danby), Guy Fawkes (Scotton), needs much marketing. ‘As a smaller regional brewer we do need to promote our core beers given the amount of advertising the big companies go in for. We like to brew and market beers that we know that our customers can enjoy on a regular basis, but also to experiment with new product development, beers that are sold through our monthly guest beer programme. There is sometimes a need to advertise our seasonal ales, even though we know they speak for themselves.’

Old Lubrication can certainly speak for itself. It’s a light copper brown ale, with a pleasingly caramel aroma. It certainly lubricates the tastebuds with a gentle malty sweetness pepped up by a luscious hoppy nuttiness, with a hint of the grape, perhaps. It’s one of those ales that tastes better and better the farther down the glass you drink. Difficult phenomenon to explain but the beer lover will understand what I mean. Now that I have found it again, I do hope they decide to make the comeback permanent.