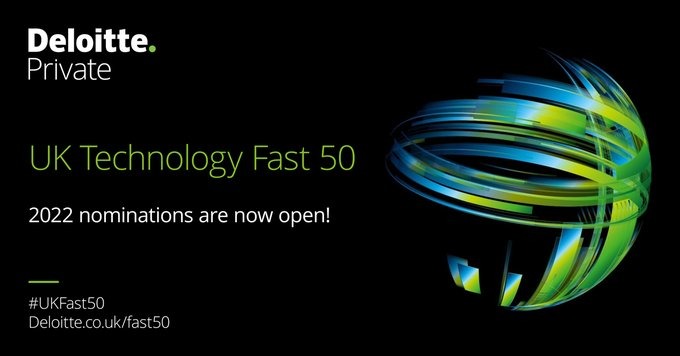 Companies from across Yorkshire can now enter the Deloitte UK Technology Fast 50 awards, one of the UK's foremost technology awards programmes. Now in its twenty-fifth year, the awards are an acknowledgement of the 50 fastest-growing technology companies in the UK. The ranking is based on revenue growth over the last four years.

Previous winners, including a number from across Yorkshire, are from both large and small companies and include some of the most dynamic players in all areas of technology sectors, including AdTech, BioTech, CleanTech, EdTech, FinTech, HealthTech, InsureTech, Communications and many more.

Since 1998, the Deloitte UK Technology Fast 50 awards have showcased an increasingly innovative and diverse range of UK-based technology companies. Last year’s cohort generated cumulative revenues of £2.92 billion in 2020/21, an impressive average growth rate of 3,337% and employed more than 19,000 people.

This year’s awards will see the launch of the new Fast 50 Women in Leadership Award, a ranking that will recognise those companies within the Technology Fast 50 that were either founded by a woman*, have a founding team comprised of at least 50% women or have a female CEO.

“The tech sector in Yorkshire has shown resilience following the pandemic and it’s testament to the county’s tech businesses and entrepreneurs that this sector continues to grow.

“Tech businesses outside of London always have a show of strength in the Deloitte Technology Fast 50 awards - winners of the last two Fast 50 awards hailed from the regions, demonstrating the continued success of start-ups outside of the capital.

“Our annual Fast 50 awards, now in its 25th year, showcases the businesses that are making a real influence in their sectors. We look forward to seeing more companies from Yorkshire in the 2022 ranking and, most exciting for this year, being able to celebrate the success of women in the technology sector through our new Women in Leadership Award.”

For full details and the entry form please visit: www.fast50.co.uk.