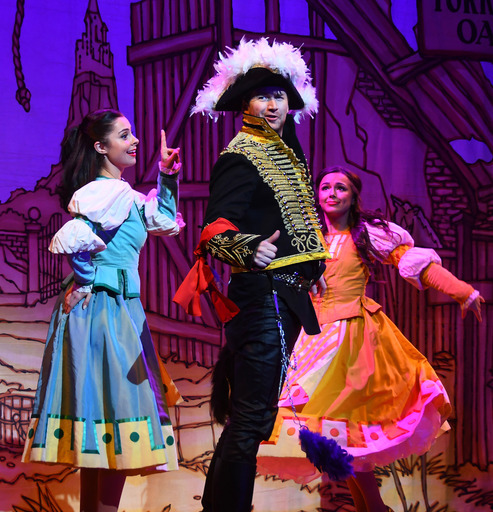 Daniel Conway as Dick Turpin
Would you believe it? A flying horse, a talking crocodile and a plethora of jokes you’ve heard more times than you care to remember!

And, the Grand Opera House, York, can boast that it apparently has one of the oldest and longest serving Pantomime Dames, Berwick Kaler, appearing as Dotty Donut.

In fact, when I spotted the posters outside the Grand Opera House proclaiming “the legend returns!” I was not too sure if that referred to Dick Turpin or Berwick Kaler

As Kaler walked on to the stage one could be mistaken for thinking it was a pop concert, such was the rapturous welcome his York fans gave him. Well, he is regarded as a legend in York. 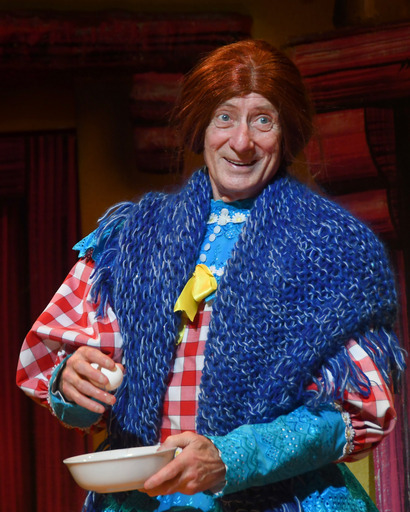 Berwick Kaler as Dotty Donut
Dick Turpin Rides Again was written and directed by Kaler. It's topical theme is centered around Dick Turpin, who, as many know, was caught in York and later buried in the city.

However, I did ask myself if there was a storyline, it seemed to be one comedy sketch after another; the plot seemingly getting lost along the way.

Kaler surrounded himself with a strong supporting cast although no big star names, the show does not really need them.

Martin Barrass as Dunkin Donut provided a good match to Kaler – they have a natural chemistry built up over years working alongside each other.

Suzy Cooper was brilliant as Donna Donut - her facial expressions might have been over exaggerated at times, which in a panto as crazy as this, were rightly placed. One minute she was dressed as Peter Pan, the next she was practising her yoga.

Daniel Conway as Dick Turpin was the handsome highway man, though a little less of the charm might have made his character more in keeping with the traditional image of Turpin.

The visual special effects with the flying horse at the end of the first half enthralled younger members of the audience (and I'm sure, a lot of the older ones too) and provided a thrilling moment as Turpin’s horse literally flew over the audience. Well done to The Twins Effects.

Despite some of the jokes being old hat, and the plot flimsy, judging by the smiling faces leaving the Grand Opera House, it looks like York has another front runner again this year.