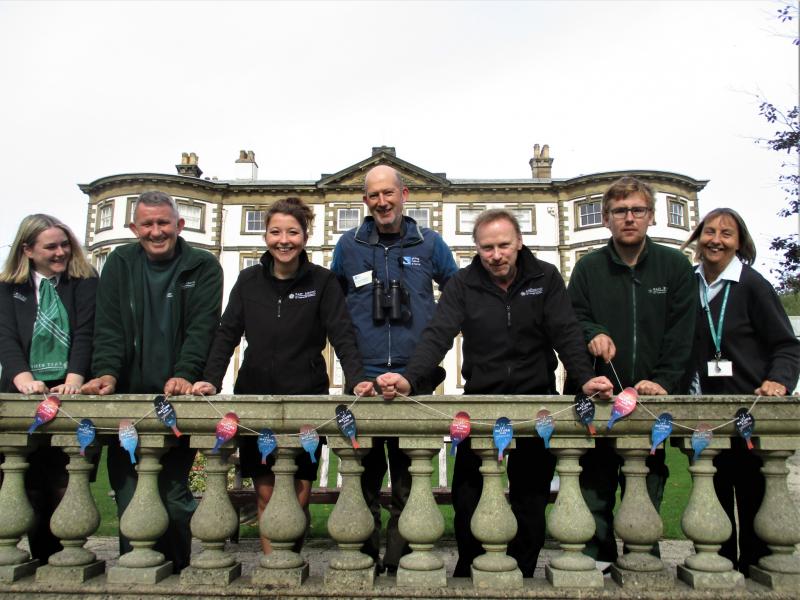 Members of the East Riding team at Sewerby Hall, with RSPB Bempton Cliffs’ site manager Dave O’Hara, get ready to put up Birdsong Takeover bunting
Pop into your local library or council customer information centre on Thursday, October 17, and you may be surprised to hear birds singing.

East Riding of Yorkshire council is working with the team at RSPB Bempton Cliffs by taking part in the charity’s latest initiative – a Birdsong Takeover.

Maria Prchlik, Communications Officer at RSPB Bempton Cliffs explained: ‘imagine if there was no dawn chorus. Or no blackbirds singing outside your window. This event is all about alerting people and politicians to the fact that birdsong may disappear by playing it in unexpected places.

'Since 1966, the UK has lost more than 40 million birds and that trend is set to continue unless urgent action is taken.'

Councillor Shaun Horton, portfolio holder for tourism, culture and leisure at East Riding of Yorkshire Council, said: ‘I am delighted that the RSPB is attempting to fill public spaces right across the UK with birdsong. It's a great idea to raise awareness of the threat to nature through the power and beauty of birdsong. The council is more than happy to support the RSPB in this initiative at our libraries and customer service centres, and at Sewerby Hall and Gardens.'

Not letting our gardens and countryside fall silent is vital. A recent government poll found that 82 per cent of people said birdsong makes them feel positive. And medical science agrees. After a successful pilot, NHS Shetland and RSPB Scotland have developed ‘Nature Prescriptions’ – connections to the natural world that are beneficial to health. Listening to birdsong is one of the recommendations.

Maria continued: 'by getting involved in our Birdsong Takeover, East Riding Council is sending out a clear message of how important nature is in the lives of both residents and visitors to this beautiful part of the world and highlighting the need to work together to preserve it for future generations.‘

So why does the sound of a chirping robin sound good to us? We have a deep human need to connect with nature that the American biologist EO Wilson identified as ‘biophilia’, and listening to birdsong is one of the simplest ways to do this.

However, birdsong plays quite a different role in the lives of those that produce it: it either drives away rival males or attracts females.

Earlier in the year, the RSPB released a single of birdsong to engage younger people in the fight to save nature and it reached number 11 in the music charts. It’s hoped that Birdsong Takeover will be equally successful at reaching out to everyone concerned about the plight of nature.