The Bradford Telegraph and Argus recently carried an amazing picture of Farsley Cricket Club taken in 1868. It is endlessly interesting in so many ways. Most of the players are wearing neckties. All have headgear of one kind or another. A couple are wearing the type of cricket caps that carried through to the last century but the rest are just in everyday wear of the time, when men seldom if ever appeared outdoors without covering their heads. One chap, possibly hatless and evidently quite shy and hiding at the back, rejoices in the name Winter Hustler, which might suggest he's playing the wrong game. 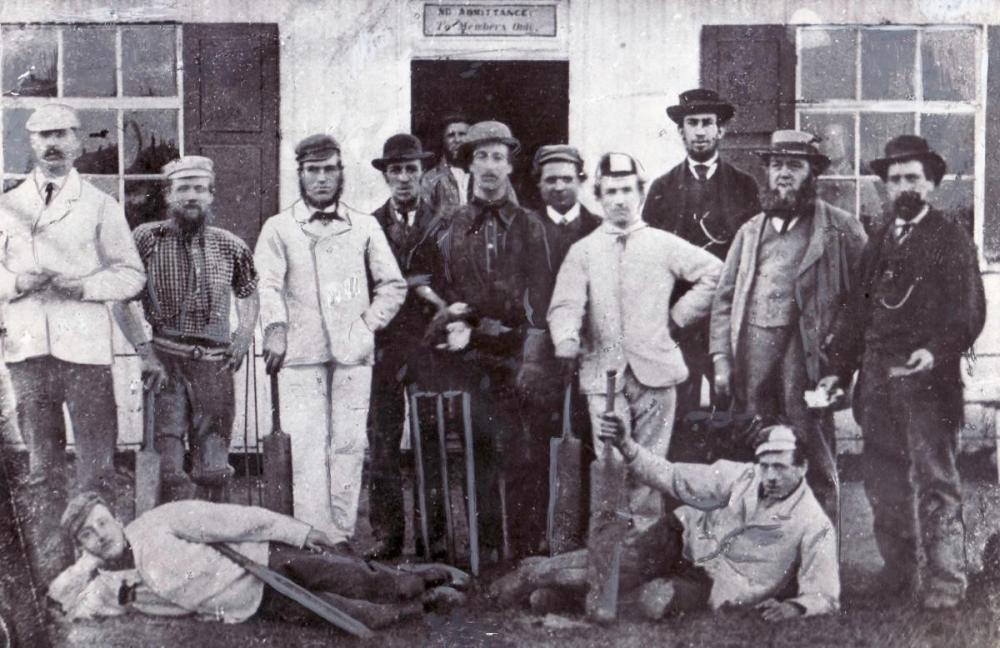 On the back row (left to right): Wiggie Isles, David Grimshaw, Martin Jack, Will Pearson, Joe Child, Peter Hollings, I W Wade, John Outhwaite, Ben Andrews, Joe Wilby. In the doorway is Winter Hustler and on the ground are Jack Hustler and John Fairbank.
I'm no expert on Victorian fashion, but I think I see assorted flat caps, a couple of bowlers, a slouch hat and on the right of the picture some rather imposing taller hats that presumably could fall off quite easily, not that their owners looked as though they did much running. The gentleman on the extreme left, Wiggie Isles, appears to be wearing a plain white flat cap not dissimilar to the one sported by Dickie Bird a century or more later. The tallest gentleman, John Outhwaite, has the look of a Methodist preacher about him, with his rigid winged collar, black tie and trimmed beard. The central figure, Joe Child, with a casually tied bandana and a stitched shirt that I associate with the Cisco Kid might have come over from the Wild West.

A couple have fob watch and chain. Most are bewhiskered in varying combinations of moustaches and beards. Two are reclining on the ground, a practice I always mistakenly associated with I Zingari old Harrovians, Oxford and Cambridge teams in the 1920s and the like. There's a ghostly face at the window.

All are ultra-serious, apart perhaps from the preacher with the suspicion of a faint smile playing about his lips. For most this must have been the first time they had ever been photographed and, apart from the reclining figures, they seem to be standing rather rigidly to attention. Of course, in those early days of photography, they would have had to hold their pose for what must have seemed like an age to avoid the image coming out blurred.


Also by Andrew Liddle...
Doors Opening For The Georgian Theatre RoyalAnd Then There Were TwoMeet Magic Rock's Christa SandquistSunak Is A Bit Of A DragRadio Gaga
They appear to be in front of a reasonably well-appointed pavilion which according to the sign over the door allows admittance to members only. Presumably it is their home ground, at the Britannia Fields, now a business park. Formed in 1864, they were originally called Farsley Britannia, after the ground. This picture is very early in the history of organised local leagues and gives a priceless insight into a time before matches were covered in newspapers and records began to be kept.

It wasn't until the 1890s that there was a sudden emergence of cricket leagues all over the industrial parts of the north of England, developing out of what had begun as local friendlies. By the turn of the century, local leagues quickly became very popular institutions, with games played on Saturday afternoons when working people had rare leisure time and the first semi-professionals arrived to add spice to local derbies.

Farsley were not among the original twelve clubs that formed the Bradford Cricket League. Seven clubs from the West Bradford League, including Allerton, Clayton, Great Horton, Lidget Green, Manningham Mills, Queensbury and Thornton, met in 1902 and decided a new larger league would be more competitive. Bankfoot, Dudley Hill, Eccleshill, Shelf and Undercliffe joined and the new league began in 1903. Saltaire and Windhill joined in 1905, and Bingley, Esholt, East Bierley, Baildon, and Bowling Old Lane following during the next ten years to create two divisions with promotion and relegation. Farsley, who in 1900 had moved to the Red Lane ground they still play at, joined the league in 1912.

Of the many county players who have turned out for them, there is none finer than Ray Illingworth, still actively involved as the club's president. He began his long association with the club in the late 1940s and entered league history in the 1949 Priestley Cup. Ties were played on successive midweek evenings and he was a sixteen-year-old when he began his epic innings of 148 against the 'old enemy' Pudsey St Lawrence. He had turned 17 by the time he walked back to the pavilion undefeated. It was another 28 years before the competition saw a higher individual score.

For more than a hundred years, the Bradford league has continued to provide Yorkshire and other counties with talented young players as well as attracting county players keen to extend their careers and highly talented overseas players. A roll call of those who have graced the league includes Sir Jack Hobbs, Sir Leonard Hutton, Sir Learie Constantine, Jim Laker, and in more recent times, VVS Laxman, Mathew Hoggard, Bill Athey and Rashid Khan.

On the same T & A page we see 4 teams representing Farsley between 1976 and 1983. All the players are beardless, immaculately turned out uniformly in whites and most are smiling, many broadly. You wouldn't imagine the ragtag mob of middle-aged men of 1868 could give them much of game. But who know, maybe Ben Andrew, second from right, could give the ball a real tonk. He certainly sports a beard worthy of W.G. Grace. And maybe the tall, angular preacherman was Farsley's answer to Fred Spofforth, the 'demon bowler' from down under, to whom he bears a distinct likeness. Perhaps we now know what he's smiling at.