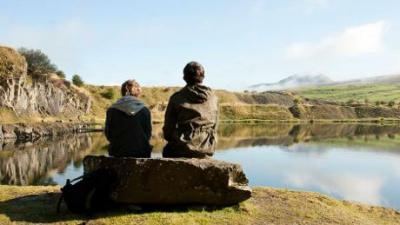 A poignant scene from Lad
A multi-award-winning film about the true story of a Yorkshire lad's poignant friendship with a park ranger is coming to the North York Moors National Park village of Swainby.

Lad: A Yorkshire Story (12A), which will be shown on Friday 20 September at 7.30pm at Swainby Church Hall and is on its 2013 tour of all 15 UK National Parks, tells the story of Tom Proctor against the background of stunning Yorkshire Dales scenery.

When Tom's dad dies, his world falls apart; his brother joins the army, his mum is threatened with eviction and he faces a criminal prosecution.

All this changes, however, when Tom meets park ranger Al Thorpe in an inspiring story of two people overcoming adversity and finding true friendship.

In real life Tom is the film's writer and director Dan Hartley and Al is Al Boughen, a Yorkshire Dales National Park Warden from 1975 to 1990, who died in 2010.

Dan Hartley explains how his debut feature film came about: "In telling this story, I'm coming home. I'm returning to the villages and communities that I grew up amongst and to my delight I'm finding that the world I cherished lives on...

"I gravitated towards Al as a teenager; accompanying him on weekends and school holidays as he attended his park duties. When I was sixteen my family emigrated to Australia and though I wasn't to know it at the time, I was never to see Al again."

Al never left Dan's thoughts and in October 2010 he decided the time was right to tell the story.

Sadly, the decision coincided with Al's death but Dan was able to meet his widow, Pat, who helped him piece together a portrait of the man.


The film crew experiencing the delights of Yorkshire
The film discovered local acting talent in the two leads, Bretten Lord (Tom) and Alan Gibson (Al), who had never acted professionally before.

The film went on tour in spring 2013 and is visiting small village halls and outdoor or art spaces off the beaten track in the most beautiful parts of the country so that it can be enjoyed with the same spirit that engendered its creation.

The film crew are honouring the ethos of the film by providing filmmaking workshops in schools and colleges within each National Park.

All proceeds are in aid of Swainby and Potto Church funds.

We have two reviews of Yorkshire Lad: