Filmed opera is a very different artefact from opera on film. The latter is a cinematic version of a stage production. Filmed opera, on the other hand, is an opera removed from the auditorium with the action taking place in a realistic setting. 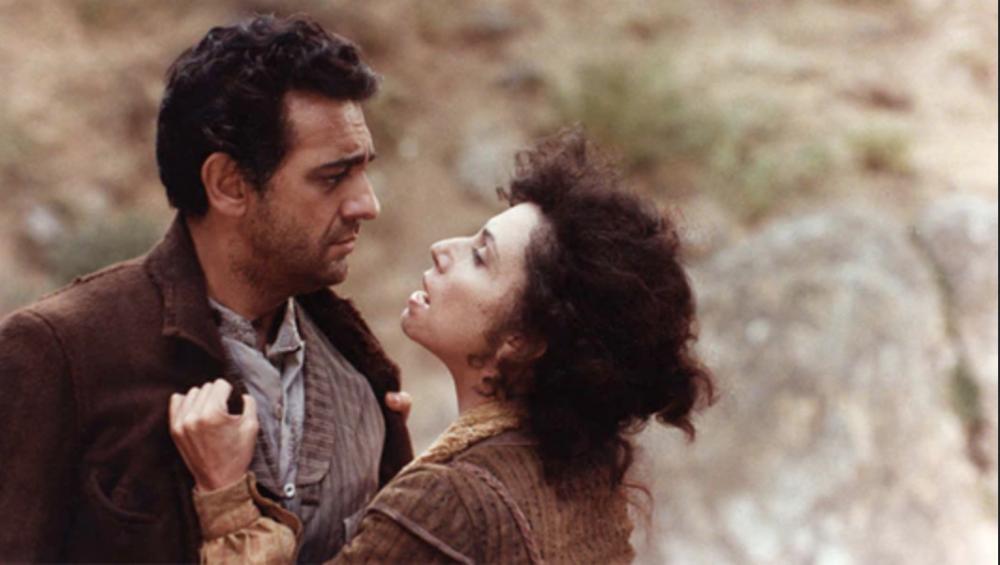 Plácido Domingo sings the part of Don José, Julia Migenes-Johnson sings Carmen
Francesco Rossi’s 1984 version of Carmen is a balanced piece that has the expansive scenes characteristic of cinema combined with those that could quite reasonably be performed within the intimacy of the stage. They are astutely integrated. 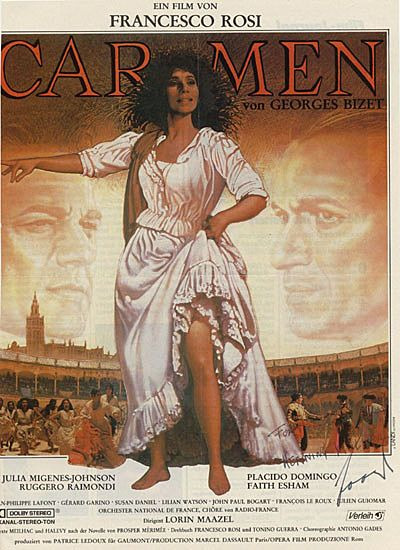 The overture plays against the latter stages of a bullfight, highly reminiscent of Scorsese’s 1980 opening to Raging Bull – equally violent, equally bloody, equally shocking Many have criticised this aspect of the film, but it seems to me justified as the setting is Southern Spain, the home of bullfighting; it’s the Nineteenth Century, perhaps lacking the sensibility of our own times, and we identify Don Jose (Placido Domingo) with the bull, tormented and bewildered by the implacable Carmen (Julia Migenes-Johnson).

As Carmen, looking remarkably like Amy Winehouse, lures Don Jose into the mountains on the smugglers’ trail, we encounter the power of the cinema screen to evoke the jagged wildness of the life Carmen aspires to. Camera angles emphasise the soaring mountains and the shadowed valleys. It is a landscape of contrast,

And contrast is what Rossi gives us as we watch the more intimate scenes.


Also by Mike Tilling...
Wagnerism – Art And Politics In The Shadow Of Music – Alex Ross, 4th EstateAlexa De Strange – In Rehearsal In ScarboroughThe Snow Queen At The SJT – Hans Christian Anderson Adapted By Nick LaneSecond Opinion: Seven Deadly Sins – Kurt Weill And Bertolt BrechtChristian Alexander Bailey - Tree Sparrow
Michaela’s (Faith Esham) entrance is intercepted by the barracks’ guard and we fear for her safety, but when she meets Don Jose, Rossi gives us one of the most tender scenes. While the section in Lillas Postia’s tavern is anything but tender, the cinema screen adds nothing that a good stage set could not achieve.

The same is true for the setting of Carmen’s death scene. (Have you noticed how, if a woman’s name is in the title, she is a gonner by the end of Act 3?) The wide open spaces around the Seville bull ring detract from the intensity of her final moments. Domingo seems at a loss as to how to interact with the distant police officers, shocked by a brutal murder.

While Francesco Rossi’s rendition has its faults, Carmen is a colourful and compelling production. Migenes-Johnson is as mercurial and sexually exciting as you would want a temptress to be and the singing is first rate throughout.

Next week, I will take a look at the South African version – U Carmen – and check out the view that Carmen embodies universal themes: a story for all times and all places.
More in this series...
Filmed Opera: Cavalleria Rusticana – Pietro Mascagni