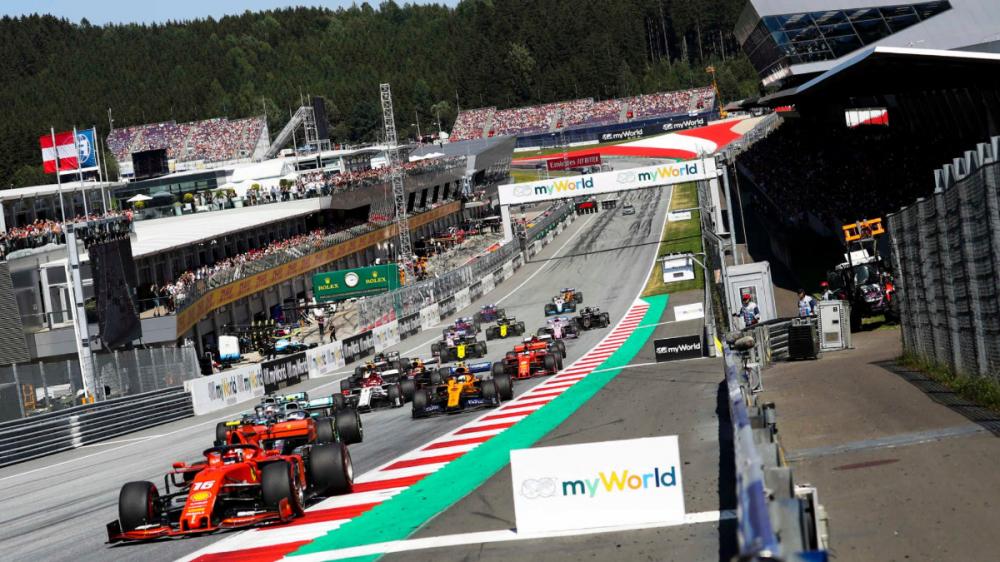 Austria’s beautifully located Red Bull Ring will kick off the new season
As expected, Formula 1 has today confirmed that, following the postponement of the 2020 season due to the global pandemic, the opening eight races of the heavily revised calendar will all take place in Europe during a ten week period starting on 5 July in Austria.

Due to the ongoing fluidity of the COVID-19 situation, a further announcement is hoped to be made in the coming weeks about the remainder of this year’s events, which may total upto 18 Grands Prix. 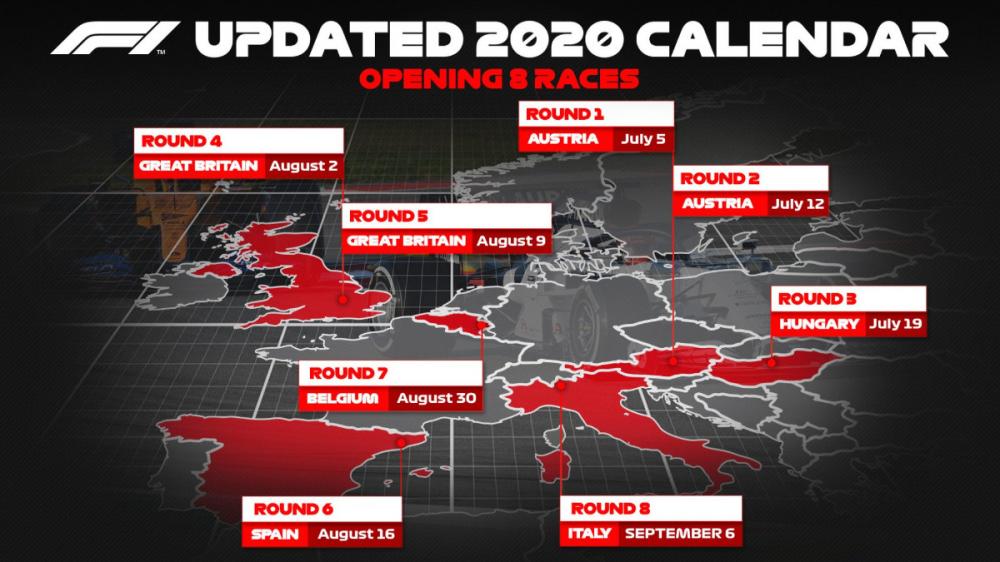 The opening eight races will all be in Europe
All the opening race meetings are expected to be held behind closed doors, but there is a desire for fans to be able to attend as soon as sensibly permissible. Chase Carey, Formula 1’s Chairman and CEO, commented “Whilst we currently expect the season to commence without fans at our races we hope that over the coming months the situation will allow us to welcome them back once it is safe to do so, but we know the return of Formula 1 will be a welcome boost to sports fans around the world.”

The health and safety of all involved will obviously continue to be the top priority, with F1 and the sport’s governing body, the FIA, having developed detailed plans for strict safety procedures to be maintained, including a limit of 80 staff per team at each closed event. Formula 2 and Formula 3 races will also accompany Formula 1 at these European rounds, but the previously postponed Dutch Grand Prix has now been officially cancelled until next year. 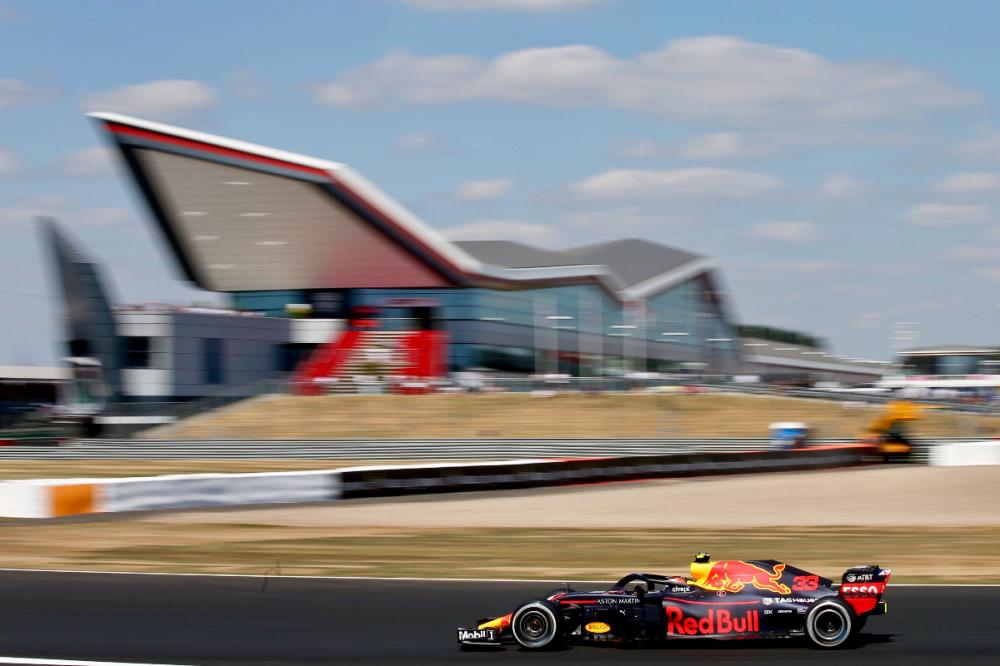 Silverstone’s Wing will be the home for F1 racing twice in August
A fortnight later the British Grand Prix is set to take place at Silverstone on 2 August, to be followed a week later at the same track by the Formula 1 70th Anniversary Grand Prix, the Northamptonshire venue having been the home of the first F1 championship race back on 13 May 1950. Then just seven days later the Spanish Grand Prix will be held at the Circuit de Barcelona-Catalunya. The pair of UK races will be subject to meeting all Government requirements to avoid any potential 14 day quarantine regulations.

Looking beyond this, the Belgian and Italian Grands Prix at Spa Francorchamps and Monza respectively are due to take place as originally scheduled on 30 August and 6 September. Negotiations continue with regard to any subsequent races in Asia, the Far East & the Americas and the season is expected to conclude with events in Bahrain and Abu Dhabi in December.

In other F1 news, revised budget cap figures have at last been agreed covering the 2021-25 seasons. Last year the all-conquering Mercedes team spent $484m on its Formula 1 campaign in contrast to the $132m budget of the back of the grid Williams outfit and for a long while it has been evident that serious cost restrictions need to be enforced to make the playing field more level, ensure sustainability and potentially attract new teams.


Also by Graham Read...
Domenicali To Replace Carey As F1 CEOUnited Autosports Fifth Overall And LMP2 Class Winner At Le MansUnited Autosports Returns To Le MansMercedes Dominate Chaotic And Twice Redflagged Tuscan Grand PrixPerez To Leave Racing Point And Set To Be Replaced By Vettel
As a result the budget cap for 2021 will now be be $145m, although there are significant exclusions such as the salaries of drivers and leading team personnel. This figure will then be further reduced to $140m for the 2022 season and set at $135m for 2023-25. An aero development handicap system will also be introduced, allowing the worst performing teams more wind tunnel and other development time.

Rumours continue to abound on so many fronts, including about the ongoing involvement of Mercedes in F1 as a race team (and not just as a power unit supplier) and about the futures of Lewis Hamilton, Sebastian Vettel, Valtteri Bottas and George Russell, but no decisions are expected until the current season has got underway. Renault has also admitted that its former double champion Fernando Alonso is under consideration for a return next year to fill the seat to be made vacant by the then McLaren bound Daniel Ricciardo.

There’s also speculation about the future career paths of Mercedes‘ motorsport boss Toto Wolff and his close friend Lawrence Stroll, the latter being the father of driver Lance Stroll and who jointly owns the Racing Point team and has a significant involvement in the struggling Aston Martin company. Racing Point will be renamed as the Aston Martin Formula 1 team with effect from next year.

The Williams cars will have a different livery to this after parting ways with lead sponsor ROKiT
Elsewhere, there has been plenty of unwelcome F1 activity away from the circuits, with the McLaren group of companies announcing 1200 job losses, including 70 within its Formula 1 operation, and the Williams team has announced it is seeking further financial assistance and is in essence “up for sale” to a greater or lesser degree. It has also parted company with its ROKiT lead sponsor and the cars will feature a new livery come the opening race in Austria.

There’s also a new row simmering away about the format of the second Grands Prix in Austria and the UK as there’s an understandable desire not to see simply a repetition of the first race a week earlier. The Formula 1 authorities and virtually all the teams are keen to experiment with a championship order reverse grid Saturday race rather than a qualifying session being used to set the grid for the main event on Sunday. However, Mercedes is currently using its veto power to block this interesting development in order to protect its own self-interest rather than perhaps the common good and fans at large.

As ever, Formula 1 continues to create news and controversy and that’s before a single Grand Prix has even taken place this year!