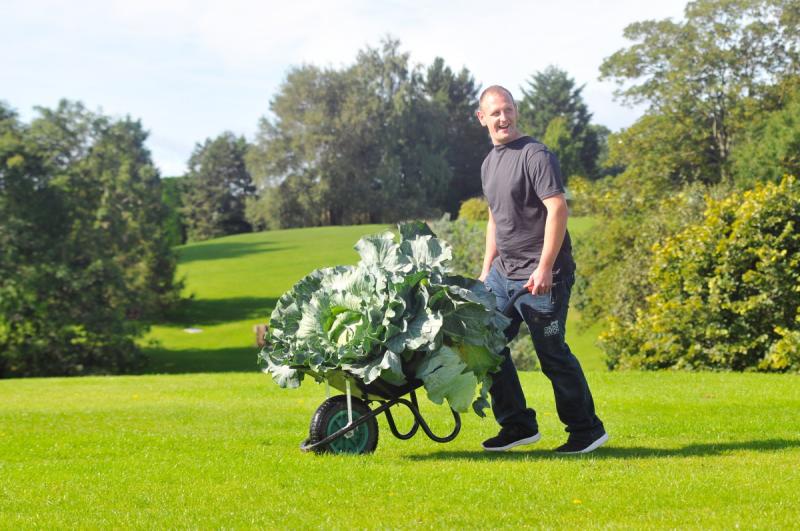 Craig Pearson with his heavy cabbage
Friday 13th gremlins hit Harrogate Autumn Flower Show when the giant veg proved too much for the scales!

The huge scales used to weigh the monster veg for the show’s annual competition broke down before judges could measure the biggest specimens of pumpkin and marrow.

Fortunately, the day was saved when an engineer managed to fix the problem and the battle of the bulge could carry on.

Luck was definitely on the side of newcomer Craig Pearson, from Mansfield, who won the heavy cabbage class with a specimen weighing in at 27.4kgs at his first major giant veg show.

It was also a match made in heaven for Mansfield couple Laura Litchfield and Chris Marriott, who share the gardening duties at home and went away with prizes for the heaviest carrot (3.835kg) and beetroot (17.84kg).


Laura Litchfield and Chris Marriott with their carrot and beetroot
Show Director Nick Smith said:
“Our autumn show always starts on a Friday and so we have had quite a few on the 13th over the years. It certainly proved to be unlucky during the giant veg judging this morning, but the problem was quickly resolved and we certainly put the scales through their paces with the heaviest pumpkin weighing in at 291.7kgs!”

The Harrogate Autumn Flower Show is running until Sunday 15 September at the Great Yorkshire Showground.

In addition to the giant veg competition, the show features two fruit and veg competitions, displays by over 50 top UK plant nurseries and more than 5,000 autumn blooms in Britain’s biggest exhibition by specialist gardening groups.

This year’s theme is Back to the Future, including a huge floral installation to launch the autumn event’s new 2020 venue at Newby Hall & Gardens.