From Monks To Mackeson In Kirkstall

I stand on Kirkstall Bridge which I once knew well. It was the point where I used to come up from the canal which I’d cycled along from Shipley on my way to the cricket at Headingley. This became the easiest and quickest way after Kirkstall station closed in 1965.

It’s an imposing impressive iron structure, cast in Stanningley in 1912. My gaze is transfixed by the the outline of the old four-storey Kirkstall Brewery, with its landmark brick tower, where perhaps most famously Mackeson’s Milk Stout, the sweet alternative to Guinness, and Whitbread Tankard, the not very good keg beer, used to be brewed. I can think of no more instantly recognisable site on the hill apart from Armley Gaol, forbiddingly fortified. 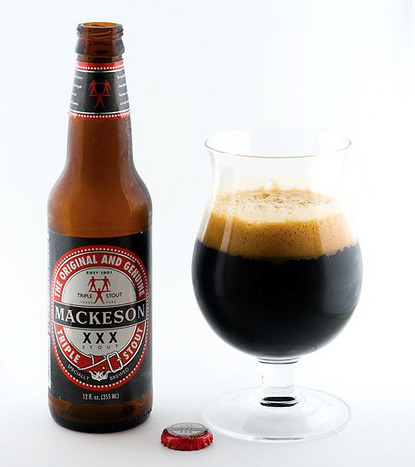 The old brewery which stood empty for several years now accommodates a thousand students during term time and I wonder how many of them will ever consider the origin of their ‘student village’ or how Dawson House came to get its name. So many things just down the road from them connect the past to the present. But who would dream of making connections with Thomas Cromwell and the hero of Waterloo? And when people flock to the new stylish bars down on Leeds’ wonderfully modernised waterfront do they ever spare a thought for those navigators - navvies - whose back-breaking labour drove the canal here from Liverpool and who very likely slaked their thirst on beer brewed in Kirkstall.

Strange that my eye is first drawn to this building rather than across the fields to my right, to the romantic ruins of Kirstall Abbey, probably England’s best preserved abbey, painted by Turner in 1824. Founded by Cistercian monks in 1152, beer was brewed here for nigh on four hundred years until the Dissolution. It was the thirsty and enterprising monks who first laid lead pipes to carry the powerful crystal-clear local springs into their brewhouse, providing the first link in the chain of Leeds’ long history as a brewing town.

I’ve always reckoned that the eighth Henry and ‘the vicar of hell’, as some called Thomas Cromwell, did more than just kick out popery: the Dissolution actually in a way started a pre-industrial economic revolution, certainly in these parts. Round here so much land liberated from the church’s control was used for wider agricultural and industrial purposes like the building of the first mills, the original Armley Mills and Thwaites’ and the iron forge which still stands.

In 1699 the good burghers of Leeds gained permission for their immensely ambitious Aire and Calder Navigation which would effectively make the city an inland port. This was fully half a century before what we normally think of as the Canal Age began. Within five years much of the work was completed, including 12 locks on the Aire near the city. Now the merchants of Leeds had access to European ports, via Hull, to export their cloth, dyed and dressed in Leeds, handloomed in the Dales. The Leeds to Liverpool Canal, driven through in record time from 1770 to 1777, gave the city access to the west coast and the new world to export not just cloth, but coal, stone, timber – and beer.

Roll on a couple more decades and a large maltings was built in Kirkstall, in 1793, at the junction of Broad Lane and the canal. Without the canal this would not presumably have come into existence at this place. They were operated by Ephraim Elsworth, from 1814 to 1832, before being bought by Thomas Walker of Hunslet - for £7,000 - who converted them into a very well equipped brewery, thus reviving a local practice that dated back to the twelfth century. This was at a time of enormous expansion in the trade thanks almost entirely to the Duke of Wellington's Beerhouse Act, of 1830, which at a stroke abolished the beer tax, extended the opening hours of licensed premises to 18 hours a day. Many pubs and not a few breweries date from this very year and act.

I’ve no wish to write the full 150-year rise, decline and fall of this brewery but what happened in Kirkstall is very much part of the real ‘real ale’ trail I’m on and writing for this newspaper. In 1844, Benjamin Dawson & Co. acquired the brewery and were so successful that larger premises were sought and built in 1867. Dawson died two years later and the Kirkstall Brewery Company, in the landmark building, came into being.


Also by Andrew Liddle...
Theatre In The RowntreeAugust's Beer Of The Month - Rooster’s Craft Beer PerfectionMixed Reaction To Brewing Tax ReformsSwing That Music At Lawrence BatleyThe Fat Cat At Kelham Island. Where History Was Made
The brewery continued to expand and re-equip over the next thirty or years and after erecting the high tower, allowing them to operate on the gravity principle, their annual production had trebled to 72,000 barrels a year, by the turn of the century. Standing here it’s possible to imagine the hogsheads of ale being rolled through large arched gates and trundled onto the barges. Their excellent range of India Pale Ales, strong ale, milds and dark and light bitters, imperial stout, double stout and porter were carried to London on the brewery’s own steam ships, the SS Charante and the SS Kirkstall, acquired in 1870, based in the port of Goole. From the Port of London, they were dispatched to the distant lands of the Empire.

Like all expanding firms they were anxious to eliminate competitors and, in 1927, they acquired Albion Brewery in Woodhouse Lane and later the Willow Brewery on Kirkstall Road, in the process adding to their stock of tied houses. Brewing then as now being a pretty cut-throat business, we find the brewery itself being taken over by Dutton of Blackburn, in 1936 - switching to brewing Dutton's Green Label, No.3 and Pale Ale - in the process adding another 83 pubs to the roster. In 1954 the giant Whitbread bought them out, re-modernised and in 1957 started producing Mackeson (first brewed in 1907 in Kent) and Whitbread Tankard in 1961.

By the early 1970s they were annually churning out 250,000 barrels of mild and bitter and a further 150,000 barrels of other keg ales and lagers. By the early 1980s, however, thanks to a large extent to CAMRA’s campaign against the deteriorating nature of mass-produced beers, as well as economic factors, tastes were changing, pubs were being modernised and rationalised and reaching out to new types of drinkers. The whole landscape in fact was changing. Whitbread closed Kirkstall Brewery in January 1983.

And there the 900-year-old story ends, except it doesn’t. A new Kirkstall Brewery opened in 2011 and I hope to review its ales very soon in this series.