From Sorrow To Superstar: Tragedy To Opportunity, Then Recognition 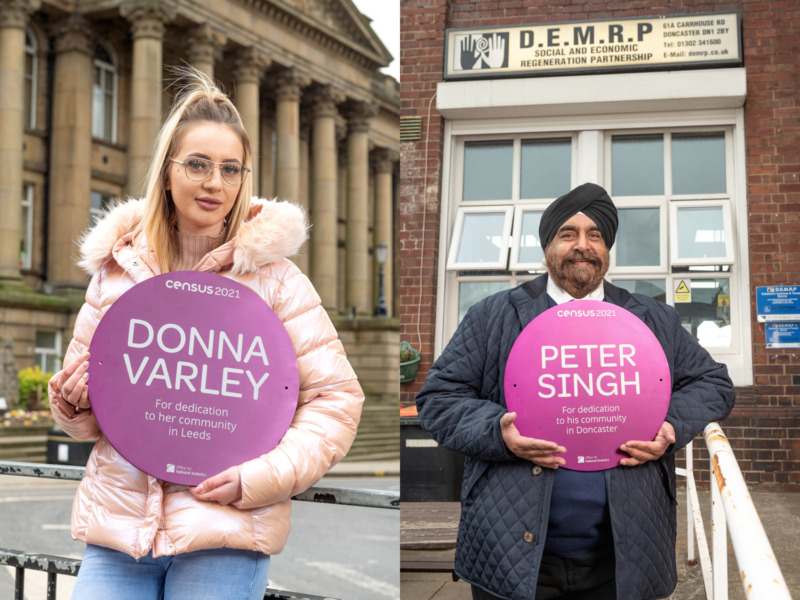 Donna Varley from Morley, Leeds. Donna and Peter Singh from Doncaster
Scott Anthony Martin from the Office for National Statistics explains why they chose Donna Varley from Leeds as one of their Purple Plaque recipients.

Census 2021 is the 22nd census in England and Wales. To celebrate this, we wanted to recognise the achievements of 22 ordinary people who have done extraordinary things. Following a year like no other, 22 purple plaques - one for each census that has taken place to date - have been awarded to community heroes up and down the country.

One of those people is Donna Varley from Morley, Leeds. Donna joins Peter Singh from Doncaster as one of two winners in Yorkshire who received the purple plaque award for extraordinary service to their community.

"It has been incredible to see the reaction from local communities for this award which resulted in hundreds of entries across England and Wales. This is testament to just how many incredible people are doing amazing things and how, during this difficult year, we have seen the best come out in people. "

We can all do something,however big or small, to help those around us.”Donna’s son Kaison was born with a rare condition called mitochondrial disease, which can cause seizures,and for which there is no cure. Donna had to receive medical training to help Kaison at home, where he needed 24/7 care.

When Kaison was rushed to hospital in February 2020, Donna had to leave her 10 year old daughter at home to be with her son because of Covid restrictions. What followed were a painstaking two months watching over him wondering what might happen next, before he was discharged to Martin House for end of life care. He was allowed to leave to go home one last time, where he sadly passed away.

2020 was a tough one for us all, but to lose a child amongst all the chaos of the year is heartbreaking. The community rallied around Donna and gave her strength. Keen to give something back, Donna promptly set about helping other people in need, establishing 'Project Kaison Saves Christmas', a charity to ensure that no children went without toys at Christmas. This expanded into a foodbank and meal delivery service for disadvantaged families, and later into the Leeds Baby Bank, to help expectant and young mothers who can’t afford basics for their baby. She even helped someone whose boiler broke down, and another person whose house was flooded. In 2020, Donna and her expanding team of volunteers helped over 300 families and a children’s home, but she wasn’t done yet.

Despite all of this, it came as a surprise to her when she was nominated for the award by a neighbour. She only found out after she’d won and didn’t think she was deserving of the award.

Donna and her team of 14 volunteers aren’t done yet. She recently set up an Easter egg appeal for an old people’s home, and is raising money for Leeds General Infirmary and Martin House. She’s even looking to start working with the homeless every Thursday evening too. At a time when it can be hard to think about others, some people go above and beyond. Leeds is known for its welcoming nature and it’s because of people like Donna Varley; Leeds’ very own census community superhero.