Plans to consult on gene editing – which could unlock substantial benefits to nature, the environment and help farmers with crops resistant to pests, disease or extreme weather and to produce healthier, more nutritious food – will be set out today (7 January) by Environment Secretary George Eustice in his speech at the Oxford Farming Conference. 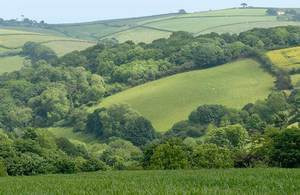 The way that plants and animals grow is controlled by the information in their genes. For centuries, farmers and growers have carefully chosen to breed stronger, healthier individual animals or plants so that the next generation has these beneficial traits - but this is a slow process.

Technologies developed in the last decade enable genes to be edited much more quickly and precisely to mimic the natural breeding process, helping to target plant and animal breeding to help the UK reach its vital climate and biodiversity goals in a safe and sustainable way.

Gene editing is different to genetic modification where DNA from one species is introduced to a different one. Gene edited organisms do not contain DNA from different species, and instead only produce changes that could be made slowly using traditional breeding methods. But at the moment, due to a legal ruling from the European Court of Justice in 2018 gene editing is regulated in the same way as genetic modification.

The consultation announced today will focus on stopping certain gene editing organisms from being regulated in the same way as genetic modification, as long as they could have been produced naturally or through traditional breeding. This approach has already been adopted by a wide range of countries across the world, including Japan, Australia and Argentina.

Government will continue to work with farming and environmental groups to develop the right rules and ensure robust controls are in place to maintain the highest food safety standards while supporting the production of healthier food.

"Gene editing has the ability to harness the genetic resources that mother nature has provided, in order to tackle the challenges of our age. This includes breeding crops that perform better, reducing costs to farmers and impacts on the environment, and helping us all adapt to the challenges of climate change.

"Its potential was blocked by a European Court of Justice ruling in 2018, which is flawed and stifling to scientific progress. Now that we have left the EU, we are free to make coherent policy decisions based on science and evidence. That begins with this consultation."

Consulting with academia, environmental groups, the food and farming sectors and the public is the beginning of this process which, depending on the outcome, will require primary legislation scrutinized and approved by Parliament.

"The UK prides itself in having the very highest standards of food safety, and there are strict controls on GM crops, seeds and food which the FSA will continue to apply moving forward.

"As with all novel foods, GE foods will only be permitted to be marketed if they are judged to not present a risk to health, not to mislead consumers, and not have lower nutritional value than existing equivalent foods. We will continue to put the consumer first and be transparent and open in our decision-making. Any possible change would be based on an appropriate risk assessment that looks at the best available science."

Sir David Baulcombe, Regius Professor of Botany in the Department of Plant Sciences at the University of Cambridge, said:

"The overwhelming view in public sector scientists is that the Nobel Prize winning methods for gene editing can accelerate the availability of crops and livestock for sustainable, productive and profitable agriculture. I welcome the DEFRA consultation that will help with a broader assessment of gene editing as an appropriate technology in agriculture."

Aside from gene editing, the consultation will also begin a longer-term project to gather evidence on updating our approach to genetic modification by gathering information on what controls are needed and how best to deliver them. We want our regulations to be in step with the current science and the knowledge we have learned from 30 years of existing regulation.

The consultation will run for ten weeks from Thurs 7th January to Weds 17 March at 23:59.

During his speech at the Oxford Farming Conference, the Environment Secretary is also expected to pay tribute to the farming industry after a challenging year and note the beginning of the Agricultural Transition Period announced in November.